This weekend’s trailer post is an epic one as lots of titles are released on Friday and Saturday. My week in blog posts started with a review of the Korean film The Gangster, The Cop, The Devil (2019) and then a review of Whole (2019) which I wrote back in March and then a preview of the films that have been programmed for Japan Cuts 2019 – a great selection!

To the Ends of the Earth

Kiyoshi Kurosawa teams up with a great cast to make a movie which is a co-production between Japan and Uzbekistan to commemorate the 25th anniversary of the establishment of diplomatic relations. Two of the leading actors have worked in his films, Atsuko Maeda being the lead in Seventh Code and Shota Sometani having a supporting role in Real.

Synopsis: Yoko (Atsuko Maeda) is a reporter for a TV variety program and her assignment is to find a mythical fish in a huge lake in Uzbekistan, a country that once flourished as the centre of the Silk Road. Things don’t quite go according to plan for Yoko and her crew and, one day, drawn by a mysterious voice, she departs from their company and loses herself in the wonders of the country…

We Are Little Zombies 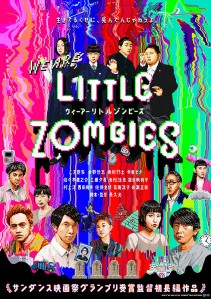 This has won awards and plaudits at Sundance and it was at the Berlin International Film Festival earlier this year. It has an otaku aesthetic with 8-bit computer games being a big influence. Some really great actors are in this one and it has a lot of buzz from people who have seen it.

Synopsis: When their parents are die, four 13-year-olds, Hikari, Ishi, Yuki and Ikuko, find they cannot cry. What do you do in such a situation? Well they make a rock band to search for their emotions. While doing that, they meet the far-our residents of a junk yard and hit the big time! 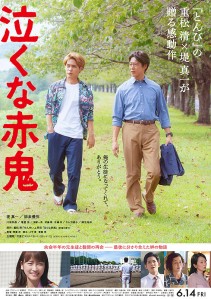 Atsushi Kaneshige has worked as first assistant director on Hush! (2001), Detroit Metal City (2002), and Kore-eda’s films Like Father, Like Son (2013), Our Little Sister (2015), and After the Storm (2016). He has two great actors in the lead roles, Shinichi Tsutsumi (Why Don’t You Play in Hell?) and Yuya Yagira (Nobody Knows, Destruction Babies).

Synopsis: When Takashi Obuchi (Shinichi Tsutsumi) was a high school baseball coach he had a fierce reputation for being tough and passionate with his students. This, coupled with his tanned face, earned him the nickname “Red Demon Teacher”. That was a while back. Now Takashi is middle-aged and a little more mellow. He isn’t the only one to change. Tomoyuki Saito (Yuya Yagira) was a talented member of the baseball team before he dropped out of school but now he is a responsible adult married to a woman named Yukino (Rina Kawaei) and he has a baby. However he only has only 6 months left to live due to having terminal cancer. Takashi regrets that he was so strict with his students and plans something for Tomoyuki.

For Whom the Alchemist Exists

Synopsis: Shoji Kawamori is a director famous for mecha anime. He worked on the opening video for the smartphone game this movie is based on. The story takes place on the continent of Babel, where the Tower of Babel looms large over seven nations. The invention of alchemy led to a war that brought humanity to the brink of extinction. An uneasy peace was called and alchemy was banned from use for hundreds of years since until another war broke out in Continental Year 911. The nation of Lustrice assembled an army bolstered by alchemy but the others rallied together to beat them. However, the alchemy is still in use and chaos is brewing…

Synopsis: Three middle-aged men with Shiba dogs meet up in a park everyday and have casual conversations about whatever is on their minds.

Hirokazu (After the Storm) Kore-Eda and Miwa (Wild Berries, Dreams for Sale) Nishikawa’s  BUNBUKU production company are engaged in a variety of projects which are coming to light. Director Nanako Hirose is at Japan Cuts next month with the film His Lost Name and she is credited as one of the directors of this drama.

Synopsis: Junichi Ito (Jun Shison) is a young man who wanders around Japan with seemingly no home. He does possess the ability to fascinate women (probably because he’s super handsome) and in this drama changes the lives of six different ladies who are all unsatisfied with their lives. 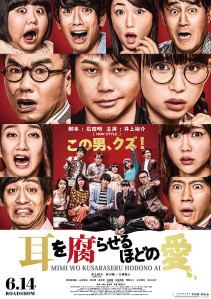 Akira Ishida and Yusuke Inoue are a hugely popular comedy duo who have made a murder-mystery combined with love and comedy.

Synopsis: Suzukichi Suzuki was super-popular before he was super-murdered by someone amongst a group of people he led to a hotel on an island. An investigation unfolds with Suzuki, a talking corpse narrating things, at the centre of a love quadrangle because he was involved with many women in the group. Drama ensues and gets blown at of proportion as strangers show up.

Synopsis: The otome game “Uta no Prince Sama ♪” debuted on the PSP in 2010 before getting an anime adaptation. This is the first movie adaptation. The story takes place in a school for unique people who aim to be an idol. Lessons are focused on making the best musical performance so expect lots of singing and dancing and high-quality stage production. 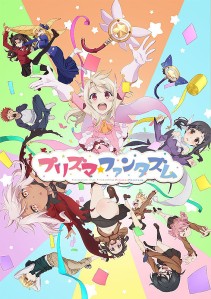 Synopsis: Hiroshi Hiroyama takes the Fate/stay night characters such as Illyasviel von Einzbern and imagines them not as deadly warriors locked in a serious and mysterious life-and-death competition for magical dominance but as magical girls involved in slapstick comedy. 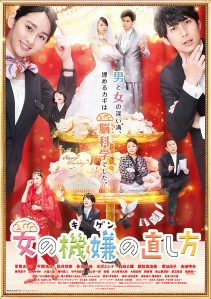 Synopsis: Ai Majima (Akari Hayami) studies AI at a university and is collecting data for her graduation thesis which is about finding what makes it difficult for men and women to understand each other and how to overcome it. The theme of her thesis is”way to make women feel better according to differences of the brain between men and women” and for research on her thesis, Ai Majima begins to work part-time at a wedding hall. Alongside Wedding Planner Seiji Aoyanagi (Yuta Hiraoka), she is in charge of a wedding for a couple where all kinds of problems between bride and groom and their family and friends occur!

Rascal Does Not Dream of Dreaming Girl the Movie 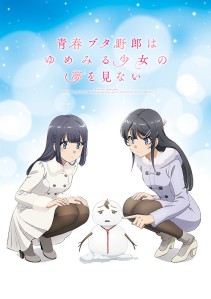 Synopsis: Sakuta Azusagawa is a high school student with “puberty syndrome” who has visions of a bunny girl. The girl is Mai Sakurajima, Sakuta’s upperclassman and also a famous actress who has gone on hiatus from the entertainment industry. Sakuta is the only one who sees Mai as a bunny-girl figure and so he sets out to solve this mystery, and as he spends time with Mai, he learns her secret feelings. Other heroines who have “puberty syndrome” start to appear in front of Sakuta.

Synopsis: The film will depict the finale of the battle between Ooarai Girls Academy and other schools where girls operate tanks. 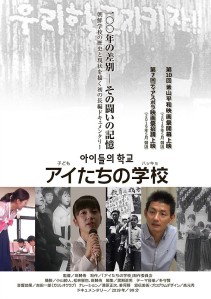 Synopsis: The exchange of people and languages between Korea and Japan has been going on for a long time and it has been a fractious history at times with plenty of conflict and hatred. After the war, Koreans in Japan were able to get education at state-funded Korean schools and universities but in 2010, the Japanese government removed the Korean school from the high school grant system, and local governments also cut off subsidies one after another. The long history of Koreans in Japan is unearthed through unknown historical material and testimonials and shows the battle against 100 years of discrimination.

Synopsis: This is a live-action film produced by STUDIO 4°C, the animation production company that created the anime “Children of the Sea” (released last week and screened at this year’s Annecy). A man disappeared, leaving six videotapes. The tapes titled “The Sea Beast”, “The Sea”, “Life”, “Mythology”, “Dialogue” and “Space” are interviews with experts in different locations about each title. These are interspersed with voice memos of the missing man as he ponders “the possibility of mankind living in the sea”. This question leads the man to Micronesia where there is a seventh tape without a title and what that tape shows… Voice actor Win Morisaki, one of the cast for Children of the Sea, plays the missing man but real scientists and experts are interviewed.

Synopsis: When the owner of restaurant Kagami, a world-renowned gastronomic researcher, he discovers that his once-popular Michelin star rated business is empty… until a strange man appears and shows him what has happened. Which appears to be dancing… Everything is served up with a side-order of dancing… truly a horrifying development for a restaurant experience.

Synopsis: A youth movie based in Aichi and Nagoya with the idol group “TEAM SHACHI”. These four girls have different dreams such as being an actress or a dancer and must contend with troubles in their everyday life as they follow their chosen path.