I interviewed a number of people at the Osaka Asian Film Festival and these interviews are being published over at V-Cinema. This interview was the first to go online on March 28th.

Yoshinori Sato was born in Aichi, Japan on February 1975. After graduating from high school, he travelled to the US to study filmmaking at the University of Southern California. Since graduating, he has worked as a director in Japanese television while also making independent films. His film credits include Bad Child (2013) and Her Mother, which played at international film festivals including the 21st Busan International Film Festival and the Osaka Asian Film Festival 2017.

Sato returned to Osaka to give the world premiere of his documentary, Shinjuku Tiger, a fascinating look at a flamboyantly dressed and inspiring man who wears a tiger mask and, since the 70s, has practically lived in the bars and cinemas of Shinjuku as he pursues good films, beautiful woman, and delicious sake. It is all part of a fiction he has created to “spread love and peace” and the film shows the character in action as he works his normal job in newspaper delivery and goes on epic bar crawls that rope in celebrities and friends. This films borders on hagiography but gains depth as Sato uses the life of the man to examine the changes and events that Shinjuku has seen through the decades so we get some sense of the culture of one of Tokyo’s most famous wards.

Sato kindly gave an interview after the Q&A that followed the second screening of Shinjuku Tiger at the festival. The interview was conducted in English but we were joined by interpreter Keiko Matsushita who offered some interesting questions and insights.

END_OF_DOCUMENT_TOKEN_TO_BE_REPLACED

Receiving its world premiere at the Osaka Asian Film Festival (OAFF) 2019, Shinjuku Tiger (2019) is a return to the world of documentary filmmaking for director Yoshinori Sato. Although he has a background in television documentaries, he will probably be best known for his 2016 sophomore feature about capital punishment and guilt, Her Mother, an intense film where the mother of a murder victim seeks to prevent the execution of the murderer. It won plaudits for the acting at different festivals including Busan 2016 and OAFF 2017. After a fairly bleak and heavy drama about coming to terms with murder, Sato steps back into documentaries with a film about a flamboyant guy who is all about spreading love and happiness.

END_OF_DOCUMENT_TOKEN_TO_BE_REPLACED

I hope everyone is fine!

I’m in the middle of a 12 day week after going back to doing fun overtime in work but I managed to do a lot of writing as well. I posted about a special screening of animated documentaries by female directors – World Animation Theatre 2019 – and also a preview for Nippon Connection 2019.

A real mixed bag of trailers this week.

END_OF_DOCUMENT_TOKEN_TO_BE_REPLACED

Nippon Connection returns to the German city of Frankfurt from 28th May to 2nd June and the organisers have programmed around 100 feature and short films as well as many cultural activities. It is a veritable feast of things to do and see and eat so I’m going to list things and offer some highlights, films that might be to find outside of the festival. Tickets are already on sale so, without further ado, here are the films on offer.

END_OF_DOCUMENT_TOKEN_TO_BE_REPLACED 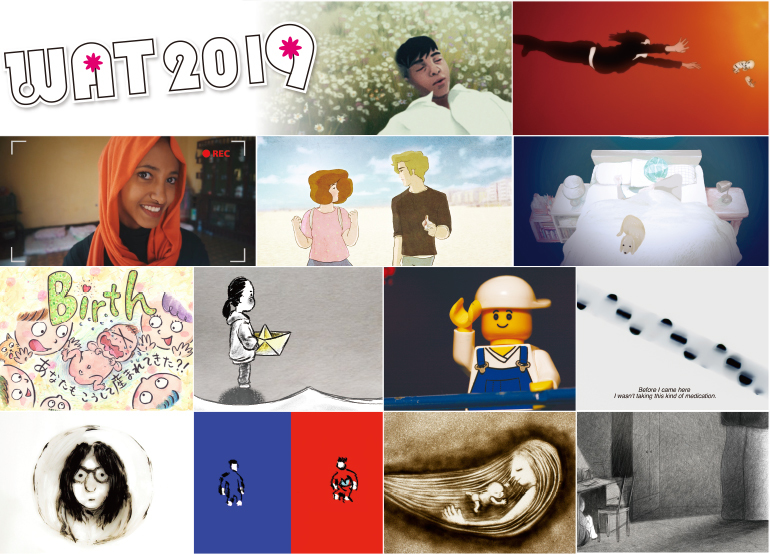 13 animated documentary films by female directors from Japan, Korea and Sweden will be screened in a number of venues across Japan, starting in Tokyo before heading west throughout 2019/20. The stories cover a wide range of experiences from the deeply personal to global politics.

END_OF_DOCUMENT_TOKEN_TO_BE_REPLACED

Time to watch films. I have four Korean titles lined up for this weekend, one of which I watched well over a decade ago (The Host). I tried watching some films earlier in the week but didn’t get far into them before turning them off due to other demands. Anyway, a news story and an interview I did were published over at Anime UK News at the tail end of last week and two reviews I wrote for V-Cinema were also published – Minidoka and Alternative Facts: The Lies of Executive Order 9066. I also posted a review of the short film Slowly here and then an interview I did with the director and producer of that film, Momoko Fukuda and Jumpei Inoue.

END_OF_DOCUMENT_TOKEN_TO_BE_REPLACED

I interviewed a number of people at the Osaka Asian Film Festival and these interviews are being published over at V-Cinema. Here was the first to go online on May 04th.

Momoko Fukuda hails from Ibaraki City, Osaka Prefecture. After studying at the Japan Institute of the Moving Image, her graduation work Goodbye Mother (2014) was selected by a number of Japanese festivals including the Yubari International

Fantastic Film Festival. In 2015, she took part in the New Directions in Japanese Cinema (NDJC): Young Filmmaker Development Project run by the Japanese government’s Agency of Cultural Affairs. It is designed to foster a new generation of directors who can bring new life to the Japanese film industry and Fukuda seems truly unique in her tastes. The resulting film, Dad’s Marriage (2016) (here’s my trailer post), was screened at international festivals such as Camera Japan in Holland where it stood out for its unique pacing and a story that challenges the norm of what people consider to constitute a family. She is turning it into a feature film, Oishii Kazoku, due for release in 2019. Her most recent works have been shorts, one a part of the omnibus film 21st Century Girl (2019) which appeared at last year’s Tokyo International Film Festival, and the other is the a rather offbeat Slowly which appeared at the 2019 Osaka Asian Film Festival.

Slowly is a slice out of the lives of two old friends. After their high school reunion, they drive back to some unspecified point, their conversation awkwardly hovering around questions about their past and future and the changes to their hometown. Their journey is stopped by a tennis umpire’s chair, which lies on the road. The two suddenly find themselves helping a third person carry the chair away and we watch as they lug the thing through a beautiful series of pastoral scenes and mundane small town shots while still talking about their lives. The film seems aimless and has a laidback rhythm because not much happens. But through conversation and behaviour, we can read a lot and it is interesting to wonder over the images and actors.

It reminded me of my 1990s childhood when a variety of European films from Rohmer or Aki Kaurismaki and stageplays by Beckett were on terrestrial television in the UK rather than squirreled away on some satellite channel. I ended up watching the film a few times and felt quite moved by the experience, sensing a certain longing, acknowledging the nostalgia for my past and some gaps in my present as I identified with the characters.

There were two screenings at OAFF and I caught the film’s first screening where the audience seemed to appreciate the experience. I was due to interview Fukuda and her producer Jumpei Inoue after the second screening. When I arrived at the cinema, I was told that one person had reacted negatively to the film at this second screening but, despite this, Fukuda and Inoue, along with two of their team, sat down with me. Undaunted and thoughtful, they kindly spent over 30 minutes talking about the making of the film and their inspirations.

END_OF_DOCUMENT_TOKEN_TO_BE_REPLACED

Momoko Fukuda is a director going places and quickly. Originally from Ibaraki City, Osaka Prefecture, she studied at the Japan Institute of the Moving Image and her graduation work Goodbye Mother (2014) was selected for big festivals such as the Yubari. In 2015 she took part in the NDJC: Young Filmmaker Development Project, a hotbed for young directors to grow in terms of their skills, and she made Dad’s Marriage (2016), a story where a make-up artist returns home on the occasion of her mother’s memorial to discover her father (played by actor and comedian Itsuji Itao) wants to become the bride of a local handyman. This was screened at international festivals and she is currently turning it into a feature. Recently she was tapped to create a short for the high-profile female led omnibus film 21st Century Girl (2018) and she appeared at the Osaka Asian Film Festival 2019 with the world premiere of her film Slowly, a short drama which goes in a totally different aims to use absurdity to examine the human condition.

END_OF_DOCUMENT_TOKEN_TO_BE_REPLACED

I hope everyone is doing great.

This week was marked by periods of procrastination. I worked on a couple of interviews (the final ones from Osaka) and one for an animation project but I only finished one review and watched three films. Being in work every day is not an excuse so I aim to do better. The reviews I completed last week went live over at VCinema: Okaasan (Mom) and Bed & Breakfast as did an interview with Momoko Fukuda and Jumpei Inoue of the film Slowly. I posted a review for the film Melancholic (2018) and a preview of the Cannes Film Festival.

END_OF_DOCUMENT_TOKEN_TO_BE_REPLACED

Seiji Tanaka’s debut feature Melancholic won him a share of the best director prize in the Japanese Cinema Splash section at last years Tokyo International Film Festival (Masaharu Take also won for his film, The Gun (2018)) and one can see why as it manages to combine a number of tones and genres to create a film that feels fresh and original as well as socially conscious. Its tone has a litheness that makes it unpredictable. When I thought I had it figured as something along the lines of a hard-boiled crime film like Ken and Kazu (2016) after its opening, it switched up its style and continued to be unpredictable until the end.