The Eternity Between Seconds 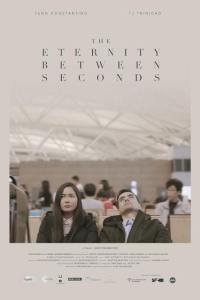 There is something about liminal spaces such as airports which allows the mind to wander loose from the moorings that reality keeps us grounded with. While there, free from commitments to family or work, it is possible to drift in a sea of strangers as we travel from one location to the next which is when we reassume responsibility. We can take a break from ourselves and be open, not just to a change in place but also thinking. This is an idea explored realistically and relatably in The Eternity Between Seconds, a Filipino film where two weary souls meet and offer respite from life’s worries.

We are first introduced to Andres (TJ Trinidad), a successful motivational speaker and self-help author who seems to have lost his own motivation after reaching his early 40’s. Despite fame leading him to a book signing in Korea, he finds himself sinking deeper into his melancholia. Calls from his wife and editor seem to weigh him down and he tries to dodge a big change on the horizon. As he prepares to leave for home he drifts around Incheon airport where he meets Sam (Yeng Constanino), a twenty-something Korean-Filipino who is about to meet her estranged Korean father for the very first time. Despite there being something of a meet-cute between the Andres and Sam after she purchases his latest book at an airport store, she zeroes in on the distance between the ideal he presents on the page and the tired man in reality. Too exhausted to play games, he talks honestly with her and finds out that she too is buffeted by her anxieties, something to be expected from the momentous occasion of a family reunion which she puts off.

The film foregrounds each person separately at different moments as they wander around the airport, each avoiding big existential questions in the large and impersonal, though comfortable, confines of airport lounges and stores. We listen in while Andres carries out phone conversations with the sort of placating tone used to turn away from emotionally difficult moments. The seriousness of Sam’s turmoil is given with her various calls to her grandmother conducted in a bathroom stall. These climb the scales of emotional intensity but the young lady is always put back on an even keel with her K-pop loving grandmother’s jokes and reassurances. Both face big existential questions and the answers are not easy, especially for Sam whose sense of alienation and fear of fitting in with her father’s culture and what she might find in the man is pointedly made when we see her compare Korean women with their whiter-than-white complexions and practice the language.

The narrative cleanly builds up their inner conflicts so we understand why they spend time delaying having to make tough choices. Illumination is provided by conversations that gradually eke out thorny family histories and see how they help pull each other out of their respective holes.

The chief delight of the film is in their relationship which acts like a balm against the rough transitions of life they are about to endure and it makes this an easily digestible film which glides on the performances of TJ Trinidad and Yeng Constantino. Trinidad plays Andres exhausted and he says his dialogue with a jaded tone. It’s the sort of recognisable jaded that occurs in people who have been around the block enough times. In contrast, Sam is more forceful but in fitful moments. She has the charming spark of youth but also shows naivete and fear. We dread the inevitable moment when they will have to split apart and face reality again as Andres must catch a flight and Sam must meet her father.

The jaded older guy and uncertain younger woman finding solace in each other’s company is familiar character set-up, probably most famous (for Western audiences) from something like Lost in Translation or Columbus. It doesn’t reach those heights but sets itself up distinctly through the technical aspects, especially the clean and gorgeous cinematography by Rommel Sales. It also does well to remain realistic about the situation by not bothering with being enigmatic or erotic or getting too lost in the cultural quirks of a foreign country. It sticks to the crises that Andres and Sam face which are easy to understand and offers up a real answer to the problem: these two characters will have to just keep going and hopefully find blue skies again.

What comes out of the film is a certain longing for a pause between big decisions being played out. Negative feelings are sated not by being romantic or angry but by offering a friendly ear to listen to others, through camaraderie and comfort as the film realistically expands male-female on-screen relationships.

I got the director’s autograph after the screening and thanked him for making the film.