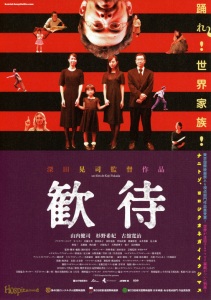 We enter the lives of the Kobayashi family. This collection of people consists of Mikio (Kenji Yamauchi), his much younger wife Natsuki (Kiki Sugino), and a daughter from a previous relationship named Eriko (Eriko Ono). Their humble abode lies above their family-run print shop in suburban Tokyo and they have just received Mikio’s sister Seiko (Kumi Hyodo) whose two years of marriage ended ignominiously in a divorce. They all live rather mundane lives in an unremarkable part of town, Mikio running the machines, Natsuki doing the accounting and taking care of Eriko, and Seiko hoping to learn English as she dreams about escaping to study abroad. Their only concerns as they drift along are a missing pet parakeet for which they have put up flyers and the nosy neighbourhood watch run by an interfering busybody (Hiroko Matsuda) who warns about the dangers of foreigners and homeless people menacing their area.

On the surface everything is fine as they do their routines and it seems like the only problems could come from outside the community but these people are hiding things as we see when a new face shows up.

Hanataro Kagawa (Kanji Furutachi), an unassuming bespectacled and bearded man, walks in off the street with a flyer and claims to know where the parakeet is. From this seemingly harmless and polite act he uses the hospitality of the Kobayashi family against them as he worms his way into the business, getting a job as a print assistant by playing on an old business connection, worming his way into the home by taking a spare room and moving his blonde-haired wife Annabelle (Bryerly Long) in, and worming his way into the family as he learns everyone’s secrets by playing a helpful advisor. He begins to manipulate the people around him and pretty soon he dominates proceedings and we watch with a mixture of incredulity and worry as he enacts a grand scheme involving immigrants and the homeless that pries apart the household and exposes secrets ranging from infidelity to money scams.

The film was written, edited and directed by Koji Fukada (who pops up wheeling a cart in one scene) and it earned distribution in the US through the Film Movement label in the early 2010s. Originally envisioned as a short, the film’s producer and lead actress Kiki Sugino suggested to Fukada that he lengthen it. Like a lot of his output it looks at the hypocrisies in relationships in contemporary society and exposes them in moments of absurdity and black comedy and he relies on stellar performances of his leading actors.

Shot in a few locations that emphasise normality and with actors portraying very real interactions, the film should be instantly recognisable to audiences and thus allow their problems to be easily identifiable. These problems and the close proximity of people and places make for claustrophobia and the tension in the film build as Kagawa guides everyone in his mysterious plan. The end result becomes massively absurd but all of those moments when an act of civility and hospitality is played upon or used to cover up misdeeds is brilliantly executed and the build-up is perfect as viewers will find themselves on tenterhooks, waiting to see what Kagawa has up his sleeve and how he will achieve it.

Everything hinges Kanji Furutachi who is marvellous as Kagawa as he affects a confidence and genuine affability that is useful for making all situations go right and smoothing over all conflicts. He masterfully controls social situations and sates the egos and desires of those around him but we are aware of when he takes advantage of politeness to force his way through situations even while remaining polite himself. A hint of violence comes out at one point but he remains ambiguous and becomes like someone you would easily fall in with. The general tone of the film is light-hearted because of Furutachi’s confidence and nonchalant approach but he has an edge of menace that makes it thrilling to watch just how far he will go. Kiki Sugino, magnificent as the lead in her feature-film debut as a director Snow Woman (2016) is the emotional core of the film as we see the chaos unfold around her but soon adds inflections of drama and sympathy as she gets sucked in. Mikio is portrayed by Kenji Yamauchi, a director in his own right with the films Her Father My Lover (2015) and At the Terrace (2016). He is sympathetic as the weak-willed patriarch of the family and does guilt pretty well. Kumi Hyodo is good as Seiko, a woman clearly running from reality by pursuing her dream of studying abroad. She put in a stellar performance as a working-class Tokyoite mother in Kako: My Sullen Past (2016) and does well here. They all act as perfect foils and fools for Kanji Furutachi’s Kagawa who shakes things up and gets people to look at themselves sincerely.

Whether Kagawa is a danger or not is left up to the audience decide. He does nobody any real harm but disrupts the harmony of the family and neighbourhood. This harmony was false to begin with and the real problems lay with the community itself, not the foreigners and immigrants envisioned as a threat. Kagawa gets people to face the problems they cause themselves and hopefully resolve them rather than scapegoating outsiders but the ending suggests the need to be polite can override any real change and so the status quo remains, hurting people. As such, this is a sly comment on Japanese society and its treatment of people. It shows conflict starts at home, from inside people who cannot be honest with themselves and their close ones, but despite being very Japanese it’s just as relevant for all communities around the world as we negotiate living in a globalised society.

This storyline would be retread but with a much more serious and dour tone in Fukada’s 2016 film, Harmonium.