I hope you guys are all doing well!

This week has been good for me. I’ve had to take charge of a VR lounge where I work and that was okay. I’m arranging a trip to see Hirokazu Kore-eda’s film Shoplifters (2018) with friends from work and a trip to see Tampopo (1988) with my mother and sister. There’s also a night at a Japanese restaurant with friends from work at the end of December.

In between all of that, I’m continuing to study Japanese, watch and review films and exercise. I watched a couple of titles from the early 2000s called… I posted reviews for Looking for my lost sunflowers (2014) and Girl, Wavering (2015), both from Noriko Yuasa, the director of Ordinary Everyday (2017) which wowed me at this years Osaka Asian Film Festival. My review for Wasted Eggs (2018), a drama examining the social pressures that affect Japanese women – specifically the expectation that they get married young and have kids – was posted on V-Cinema on Monday.

What films are released this weekend?

Synopsis: Members of the entertainment group EXILE take the lead roles in a film. The first is Hiroshi (Sho Aoyagi), an idol who wows his fans on the stage and feels empty inside. One fan named Masako (Mariko Tsutsui) is so obsessed she captures him and takes him home. Then there is Takeru (Keita Machida) whose partner was involved in a shooting. He prays for her recovery and performs good deeds every day in the hopes she will wake up. Last but not east is Tetsuo (Nobuyuki Suzuki), a man who wants to take revenge on the yakuza who sent him to prison. Due to the fact that they live in the same city, their stories will cross from time to time.

Synopsis: Akira (Kasumi Arimura) is left a widow and single-mother when her husband dies. She has a pre-teen stepson to look after and decides the best thing for them is to travel to her late husband’s hometown in Kagoshima Prefecture where she meets her father-in-law Setsuo (Jun Kunimura) and is inspired by the man to join the local railway company and train as a driver, something her husband had dreamt of ever since he was a child. Akira, her father-in-law and stepson start a new life together. 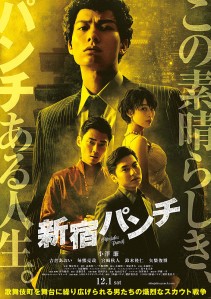 Synopsis: Hosei (Ren Ozawa) is 22-year-old guy with a punch perm and a goofy grin. He’s a bit of dog when it comes to women but hasn’t had sex yet because he lacks the knack. Well, the best way to learn something is to get involved and he becomes a scout for a hostess bar in Shinjuku’s Kabukicho, the world famous red-light district of Tokyo. At his club he meets Rumi (Aoi Yoshikura) and falls in love with her at first sight. To bad she has a partner, Takashi (Katsuya Maiguma). He works at the same bar and treats her badly. Hosei steps in to help Rumi…

Synopsis: This is the sixth film to be released. Adolf K. Weissman, the first Silver King, surrounds himself with loved ones as they gather at a dining table under five “Swords of Damocles”. The story is about to meet its climactic end as various characters enter the battlefield. No, I have no idea what is going on either.

Synopsis: A school girl named Yo makes a connection with a nurse named Yayoi when she is hospitalised but they lose contact. Some time later they meet again and things have changed: Yayoi is depressed and earns money as a prostitute while Yo suffers abuse from her step-father. Yo seeks refuge with Yayoi and a friendship develops as the older woman becomes a friend to her young house-mate. Things become complicated when Yayoi develops feelings for a paraglider, who can take her away from the harsh realities of life and soar through the skies…

I saw this psychological chamber piece at the Osaka Asian Film Festival 2017 and it all hinges on the central performance of lead actor Chise Ushio and the cruel world that Koji Segawa crafts for her. Don’t worry, it’s not all bitter and angry. There’s black humour and a neat ending.

Synopsis: Mariko, a seemingly normal housewife, has been together with her younger husband named Tomoharu for six years and has been dissatisfied every day. Despite having a son together, Tomoharu is often absent from home and she suspects he might be having an affair. Her workplace, a batting center, is also a miserable environment because the sleazy manager chases after her and the customers are rude. With constant pressure bearing down on her in public and private, Mariko becomes dominated by a certain obsession that eats away at her perception of reality. 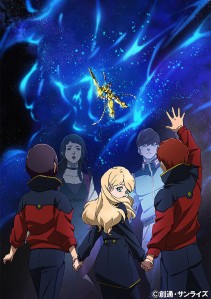 Synopsis: U.C. 0097. One year since the Laplace’s Box was opened. Despite the revelation of the original charter for the Universal Century, which acknowledges the existence of Newtypes and their rights, the world remains largely unchanged. After the destruction of the Neo Zeon remnant force known as the Sleeves, the event that has come to be known as the “Laplace Incident” seems to have drawn to a close. In the final battle, two Full Psycho Frame mobile suits displayed power beyond human imagination. The menace of the White Unicorn and the Black Lion were sealed away from public consciousness, and were consigned to be forgotten by history. But now sightings of the RX-0 Unicorn 03, long thought lost two years ago, are being reported. Its name is Phenex, an immortal golden bird.

The Rice Granary of One Hundred Years

Synopsis: A documentary exploring the unknown truth of the Rice Riots that occurred from Uozu in Toyama Prefecture during the Taisho Period. This was during 1918 when rice prices hit normal people hard. Rice merchants, the government, and other elements allowed the prices to rocket so it was increasingly hard for normal people to buy a decent amount of rice and this documentary shows how housewives from Uozu, a fishing town in Toyama Bay, raised their voices and instigated something unprecedented during the period: a riot. These mass protests and actions led to thousands getting arrested. Investigating this extraordinary situation are students from Uozu’s high school who examine the materials and legends connected to it, they visit their descendants, and come to an understanding of the crisis that became the biggest public uprising in Japan. 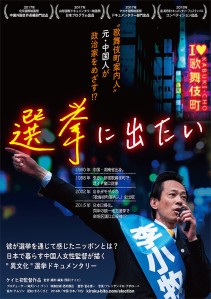 Synopsis: Lee Komaki ran for political office in 2015 and he wanted to represent Kabukicho. What made him different from other politicians was he came from China in the 1980s and started a tourism business guiding people to restaurants and shops in Kabukicho. He felt he could make history as a Chinese person who became a naturalised citizen in Japan and became a politician but the documentary shows that his path to office was fraught with challenges.

Synopsis: Popular seiyuu Yurika Kubo takes on her first live-action role in an omnibus movie where customers visit a cat cafe where customers share their problems and regain some form of happiness while being surrounded by cats. Cats are awesome.