Third Window Films are back again with the release of a 90s classic Dangan Runner by the director SABU (Mr. Long, Happiness, Miss Zombie). It is his directorial debut and is the world’s first Blu-ray and remastered DVD release and it contains a treasure trove of extras including an interview with the director. It gets released on November 12th on Blu-ray and DVD. Here are the details. 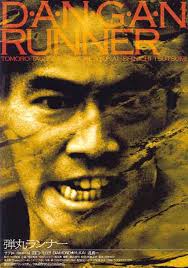 SABU, born Hiroyuki Tanaka, is an actor and cult auteur of alternative comedies. His directorial career started in 1996 with this film and he worked alongside actors such as Shinichi Tsutsui, Tomorowo Taguchi, Susumu Terajima and Ren Osugi. With these great actors he told black comedies of everyday losers thrown headlong into dangerous situations. His acting career includes work with Takashi Miike (Ichi the Killer, Shinjuku Triad Society), Kiyoshi Kurosawa (Suit Yourself or Shoot Yourself), Hideo Nakata (Don’t Look Up) and even a stint voice acting on the anime Sailor Moon.  as well. It’s exciting to think that Third Window Films is bringing his career to the West with this film.

Synopsis: SABU’s debut feature is a breathless forerunner to the German arthouse flick, Run Lola Run, and features Tomorowo Taguchi (the lead in Tetsuo) as a hapless wannabe bank robber who forgets his mask on his first big heist, and then gets caught attempting to shoplift a replacement by a convenience store, a washed-up rock star (played by real life rocker Diamond Yukai) who chases the thief. The two literally run into a Yakuza named Takeda (Shinichi Tsutsumi from Our Little Sister) to whom he owes money. Thus begins an all-night, three-way pursuit through the streets of Tokyo.

I’m saving a review of this film for a SABU season I have planned but it’s great to see it get a release in the UK. It comes out in a fantastic year for releases of Japanese films with TWF releasing three Sion Sono titles, The Whispering Star/The Sion Sono and Antiporno, and the Osamu Tezuka anime. They followed that with Suffering of Ninko and we have The Legend of the Stardust Brothers to look forward to. That doesn’t even take into account the run-away success of One Cut of the Dead which has taken the world by storm.