After the Storm is a story of everyday human failings and the constant hope for a better tomorrow that motivates us. Kore-eda cast a cadre of familiar actors who he had worked with in previous films including Kirin Kiki and Hiroshi Abe, both of whom were in Still Walking (2008) as mother and son Toshiko and Ryota. This family drama could be a sort of sequel to Still Walking due to similarities – Kiki’s character Toshiko (とし子) turns into Yoshiko (淑子) here while Abe’s character is named Ryota (良多) in both films – and callbacks likethe butterfly motif and it features a deceptive simpleness in its approach, a story of a family gathering made complex by tangled emotions tinged with bitter history.

The story follows Ryota (Hiroshi Abe). He is an easy-going fellow whose ego stays afloat on his past glory as a prize-winning author. Recent output has slowed to a trickle and despite an editor offering him work on a manga series he holds out for making worthy works of literature and tries to accrue ideas. To that end, and to pay his bills, he works as a private detective. Cases range from infidelity to missing pets. Unfortunately he gambles away the money he earns and so he can barely pay child support to his frustrated ex-wife Kyoko (Yoko Maki) and his loyal but level-headed young son Shingo (Taiyo Yoshizawa). Ryota seems to be drifting on the surface of life but everyone else is starting to swim in other directions away from him.

After the death of his father, Ryota’s ageing mother Yoshiko (Kirin Kiki) is caught between contemplating her own mortality while she carries on her routines in her danchi apartment which she has spent 40 years in but recently she has developed a crush on a neighbour who she visits. Kyoko is a single-mother navigating the choppy waters of life and looking for stability and holding down a job and there is a well-to-do guy interested in her. Shingo is on the cusp of adolescence and beginning to become a responsible young man who will captain his own ship so Ryota isn’t a great example. However, a stormy summer night will place this fractured family in Yoshiko’s apartment and offer them the chance to truly bond again but to do that Ryota will have to dive deep into himself.

Far from being a contrived way to bottle characters up, Kore-eda, like the documentarian he is, spends time sifting through everyday scenes to explore the characters while naturally building up to this dramatic crescendo.

Storm warnings and discussions of family and life are laced into scenes of normality like Ryota eating onion rings in the fast-food chain Mos Burger with Shingo and swigging bottles of Calpis while traipsing around anonymous quiet suburban streets handing out flyers with Machida (Sosuke Ikematsu), a fellow private investigator. These quiet passages of a person’s life allow Ryota to display how he feels when not being judged and characters act like a mirror. We hear the fiction Ryota creates to justify his shabby behaviour and when his character traits foul him up we see the gap between the ideal Ryota holds and his reality.

Ryota sails through his life gambling and grumbling, spying on people and retreating to his room to half-heartedly work on his novel but we get big doses of truth when he visits his mother and talks over family history and Kyoko confronts him over his faithless attitude and the film’s dramatic undercurrents become plainer to see and we find that it is less about Ryota getting Kyoko back and more about him breaking a pattern of negative behaviour. He is ashamed of his own father’s faithless behaviour and the hurt it caused and ashamed over how he follows in the old man’s footsteps. Kore-eda has thus cleverly set-up the pre-storm sections to layer little story details that show us how people imprint themselves on others and understand how Ryota will have to sincerely face the depth of his love for his family and the bridge distance between his ideal self and where he currently is. These moments come to life thanks to the experienced actors.

It’s all in the eyes, where they look and what their gaze holds. Kiki has the glint of mischievousness that darts around and her quick wits, humour and a gently comedic physical presence make her charming. It all works with the camera to relay deep affection for her loved ones. As we listen to her aged voice throughout the film we believe there is an allayed cynicism and a depth of kindness and hope that could have been boundless if given the right circumstances. Life and a feckless husband got in the way (which acts as a warning to Ryota) but hope springs eternal and she has reasons to be positive and these come out in shared family time when she shows her earnest desires. The moment when she admits to Kyoko her hope for family harmony is so raw it strikes the heart.

Operating with her is Abe who has grown from a handsome model into a fine actor. His ageing face retains a sparkle of youthfulness but it also has a slight hang-dog look. It matches with his lanky frame which can be erratic for moments of shiftiness when he’s trying to dodge responsibilities such as paying child support and it fits when he’s downhearted and slumps around, normally when he has to admit he is sinking into a sea of mediocrity. What really roots the camera to him are the hopeful eyes that glisten with emotion as he gazes upon the people he cares about when forced to be sincere and shine with vigour and determination when he needs to show resolution and acceptance that times and people change and he has to as well.

Family history and moments of confrontation and confessions over behaviour feel organically created because of the performers and the script so the heart-to-heart moments and give the film emotional heft. You feel there is a deep bond between people and it comes through how individuals are supportive and show a desire to improve, how people can hang on to the best qualities of a person and love someone for how they can make them feel but there is also the grit of realism in how time and bad behaviour can wash these things away. At the end, what matters most is to understand our depth of emotion and swim for all we are worth. Hopefully to better places with people who care for us. 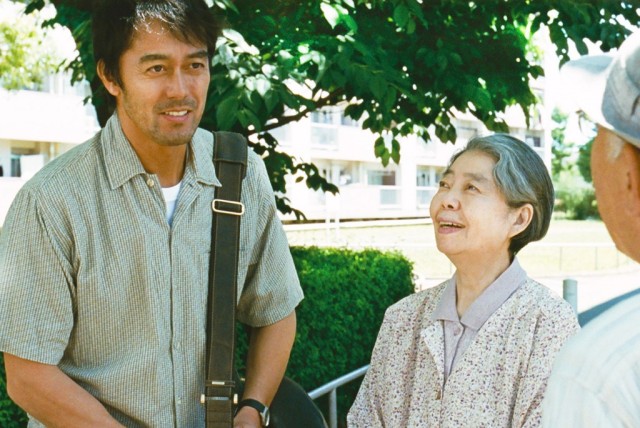 2 thoughts on “After the Storm 海よりもまだ深く Dir: Hirokazu Koreeda (2016)”