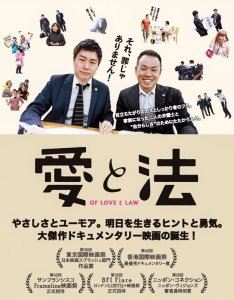 Documentarian and visual anthropologist Hikaru Toda is based in London and Osaka and has worked on many films to explore the differences between people and society. Love Hotel, a 2014 film she co-directed, was a look at the lives of the customers of a love hotel in Osaka. It eschewed going down the cheap route of titillating and alternative sex to look at the pressures, inner-desires, and memories that drive the people who escape to such a private place. The film also offered a look at the creeping draconian politics of Japan’s government which is shutting down love hotels whilst also taking away personal freedoms as it re-militarises the country. Two of the customers were gay lawyers Kazu and Fumi who lived out their love behind closed doors and reappear in this documentary out in the open.

Kazuyuki “Kazu” Minami and Masafumi “Fumi” Yoshida are partners in the first law firm in Japan set up by an openly gay couple and have been professional and romantic partners for around 15 years. They want to raise a family of their own but Japan is a country where their relationship has no legal recognition or protection. Driven by their own experience of being “different”, they work tirelessly for clients who come from a variety of situations. Their personal lives and professional work are used by Toda to reveal the hidden tensions in a country that is a place where “tradition” and the demands to conform to the will of the majority trump an individual’s happiness.

Toda keeps dry facts to a minimum. On-screen text at the start tells how minorities are denied social and legal representation and then she follows with the stories of the people Kazu and Fumi represent to prove her assertion by showing what happens when people don’t conform. Clients range from teachers fired for not standing during the national anthem to families devastated by the suicide of someone because of the threat of being outed as gay. Toda fortuitously found herself filming during an internationally famous case which focussed on the vulva-inspired art created by Rokudenashiko, real name Megumi Igarashi, who fell foul of obscenity laws. Igarashi used 3D scans of her own vagina to craft a range of things from a kayak to dioramas and a mascot in a celebration of normal part of the human anatomy and to provoke conversation about the representation of female bodies but was arrested and her work seized by the police. This, despite there being a festival all about the penis. What is art and what is porn? These issues are discussed in the film and, in one amusing sequence, Kazu goes to an anime theme store to buy real sex toys to show that Igarashi’s works are not in the same market. There are many more cases threaded through the film of real people affected by unfairly implemented laws based on narrow readings of the Japanese constitution, the most sobering being people battling archaic laws that prevent the legal registration of people born outside of the traditional family structure and driven to despair over not being recognised as real people. The whole thing is held together by Kazu and Fumi. 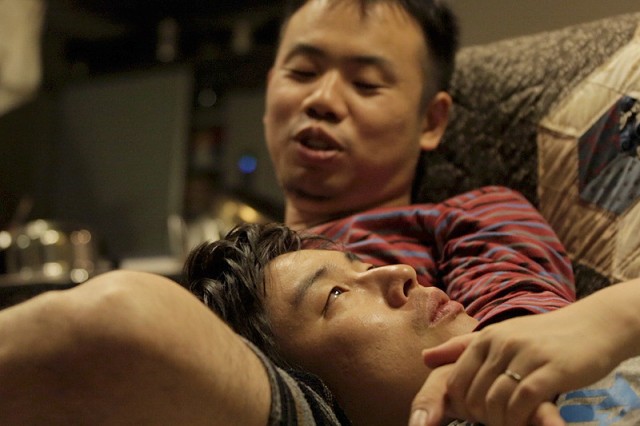 What Toda does well is to bring the viewer into the lives of the people on screen as a contrast to the serious moments of each court case and social protest. Sharp observation, excellent direct-to-camera interviews, and generosity of screen-time adds a fine texture of intimacy to absorb viewers. Toda shows small details such as family portraits of the two as young men together as well as capturing how their unique personalities fit together as they support each other emotionally and physically. Kazu, a singer-songwriter, serenades Fumi who does the cooking. Kazu’s family have accepted Fumi who dotes on others. One brilliant moment is a simple focus pull where Kazu performs a song and a crying Fumi mouths the lyrics but a focus switches to Kazu’s mother who watches her son’s lover and lets slip her own emotion.

The two men are playful with each other, full of love and care, and that love spills over to their family and friends and you get the feeling Toda is part of things. There are occasional moments when her voice can be heard as her subjects interact with her and they are not afraid or flustered by her presence which feels unobtrusive. Seeing the beats of everyday life, whether it is a walk from around the streets of Umeda in the couple’s home city of Osaka, a night out at a bar in Tokyo, or filming a music video, helps the audience to understand everyone on screen is a person while the twists in each case pin up the wider picture of normal people working hard for each other.

Of Love and Law is, without a doubt, a thoroughly thoughtful, entertaining and revealing documentary and achieves a strong sense of intimacy by taking the time to get deeper into the lives of Kazu and Fumi. Their cases expose the fault-lines in Japanese society that are invisible to many outsiders but far from being a stuffy legal film, this is a documentary full of witty and intelligent people and Toda is a filmmaker who connects with her subjects because she truly cares for each individual. The film is a vital reminder in our age of divisive politics, prejudice, and hatred that love, empathy, care, and civility are important strengths and kind-hearted people are out there and willing to help and defend others.

It has been a long journey for this film as it tours the world.

Here’s the Kickstarter trailer for the project:

Here’s a group interview from the Tokyo International Film Festival:

It was screened at Nippon Connection and then Japan Cuts 2018.

It will be playing at the forthcoming London Film Festival on October 20th and 21st, a year after it debuted at Tokyo. My review was first published on July 18th on V-Cinema.