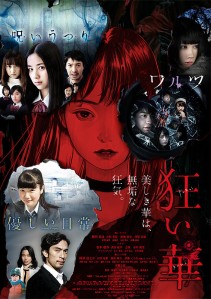 Ordinary Everyday is a 27-minute film featuring that idealised fantasy many people have: the perfect family. Is there such a thing? We all have hidden sides which we conceal, something which proves to be the case with one family in down-town Tokyo who suck in a naive outsider into their seemingly ordinary everyday lives in a tale where the ambiguous is mined for horror.

The story starts innocuously enough with Mr Tsuda (Shinnosuke Abe), a handsome teacher, visiting a student named Ami (Karin Ono) who has been absent from school due to a broken arm. He’s concerned but he needn’t be because what he finds is a happy schoolgirl with a seemingly perfect family consisting of her beautiful mother Kanako (Tamae Ando) and Sho (Eito Suda), her cute little brother. Everyone has a smile on their face and is pleasant to be around except Sho who is sullen. There’s no sign of the father. Could that be the reason?

Whatever the case, when Kanako invites Tsuda over again the teacher agrees as he gets sucked into a weird atmosphere. On the one hand, Kanako showers him with desirous looks and acts vulnerable however, just at the edge of Tsuda’s perception, he can sense there is something strange brewing. A presence making things go bump in the house, Sho’s antisocial behaviour, and weird situations he increasingly enters. If the audience is getting suspicious, Tsuda is barely thinking because Kanako’s attractive presence beguiles him and so he may not be able to find out what’s going on before it’s too late…

To say anything more would be to ruin a film which is a demonstration of masterful control of mise-en-scene to create suspense and unease. The setting starts off ordinary but Yuasa uses various audio and visual techniques to gradually distort the action on the screen to create an increasingly weird situation that hints at the danger to come.

The false sense of security needed to make this story so effective is seen in the superb set-design – a family home, a fine house with a garden, is well-established and acts as a mundane focal point for the film to return to. It feels like a place out of time and an ocean of calm especially if you have experienced the busy Sumida and Asakusa areas. The quiet and comfortable interiors are rich with details such as family photos, musical instruments and this convinces as a place that is lived in but watch the film again and see how brilliantly everything is set up for various reveals later on in the story.

There is a world outside of the house and seeing it is done through cut-aways to different characters doing different things, all of which are slices of normality, but long takes and expertly deployed reaction shots allow the actors to signal something is strange with their character’s behaviour, a look of fear or a physical tic suggesting nervousness and a reluctance to go home or, in the case of one family member, a hidden river of anger that spills out before quickly being turned off once self-control is exerted again. These increase the creepiness. There’s an ambiguity about what is going on behind the beautiful facades and an ambiguity behind the threat the audience senses which creates a gripping atmosphere.

This ambiguity leaks out into the wider world where the characters pinball around the area, not quite able to escape the nefarious embrace of the house and the person who runs it. 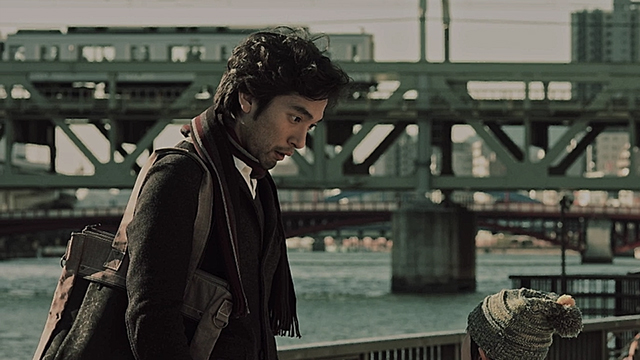 Yuasa uses many tools to create an off-kilter atmosphere through sound and visual design. Sudden loud and violent noises, prop movements to attract the attention of characters are the obvious tricks but the tension really builds and spikes at moments when Yuasa drains the screen of all colours except red and orange, initiates crazed editing and uses interesting camera placement to hard-wire weirdness into seemingly normal scenes and subvert environments. It is the ambiguity behind the scenes of normality which create unease so we don’t know how to react and there is the sense that Yuasa is peeling back the ordinary and showing the horror beneath, using ambiguity to upset the audience.

The music is unsettling. Electronica and a strange classical music track used by Koji Endo and sound effects by Hideo Koyama help texture the film by subtly creating a weird soundscape that matches the changing atmosphere. The soundtrack features something akin to a heavenly choir at the start and it works with beautiful characters living in a beautiful house to show why Tsuda is lulled into believing this idealised family portrait. By the midway point the eeriness is cranked up through the sound design which creates an atmosphere of dread and suspense through white noise, ominous noises cascading through the sets, constant whispering fraying the edges of the soundtrack, and a howling wind that seems to be blowing in from a supernatural realm.

Acting is pitch-perfect, especially from Tamae Ando who can display a sort of alluring neediness that gets men to switch off their brains as shown when glimpsed through POV shots. Shinnosuke Abe perfectly portrays an unwitting dupe falling for Ando’s charms and the image of an idealised family. Karin Ono and Eito Suda are balls of energy, at once delightful but hard to handle at points dragging Tsuda to a waiting horror that he is seemingly unable to avoid. All wear false masks and their ambiguity and unpredictability adds even more tension until the finale is revealed.

This was originally part of the omnibus movie Kuruibana (2017) but it is strong enough to have taken on a life of its own because it is filled with shocks and fantastic style that audiences may not be able to take in with a single viewing. A messily executed reveal aside, Yuasa subtly alters the film’s established logic and atmosphere in extraordinary ways until the film ultimately reveals itself to be a precision-tooled psycho-thriller which has a deliciously dark and blackly comic final pay-off that works well. Noriko Yuasa’s ability to dive into a strange story and her inventive use of sound and visual design makes this a fun film to watch and shows her to be a talent capable of mastering the narrative form and someone with a career audiences should start tracking.