This comedy gem was programmed by Britain’s Japan Foundation for their 2018 Touring Film Programme to celebrate the centenary of Yuzo Kawashima (1918 – 1963), a master 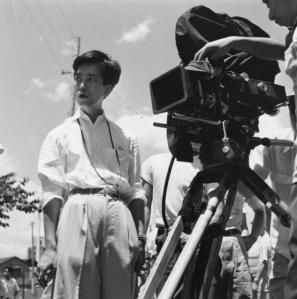 of satire who was little-known outside of Japan until around the 2010s when festivals like Berlin started programming restored prints of his films. The Japan Society in New York also recently screened a number of his films so his profile is rising. Closer to the UK it is hard to get many of his titles but we have one film at least, “Bakumatsu Taiyoden” (1957), which was released via Eureka’s Masters of Cinema label and it proved to be a funny ensemble comedy set during the Bakumatsu period when the shogunate was coming to an end. This historical setting is, according to experts, an outlier for what Kawashima was known for which was telling tales tragedy and comedy in the lives of ordinary people in post-war Japan, a nation in flux as people returned from colonies and front-lines, emerged from rubble-strewn streets and charred houses, to find a more liberal set of ideas taking root in the home islands with traditional social structures being modernised, cities being rebuilt, and everybody on the make. Indeed, it seems Room For Let is more representative of his output and some suggest it even goes as far as to act as a link between the formalised Golden Age of cinema and the New Wave as the chaotic sense of change and oddball personalities are captured on screen with class and plenty of ribald humour. Seeing it as part of the Japan Foundation Touring Film Programme 2018 with a friend was great but having the privilege of seeing a rare 35mm print was fantastic as we were taken back in time to 1950s Osaka!

“Room For Let” is based on a novel by Masuji Ibuse and details the joined-up lives of a group of different people, all with madcap schemes, secrets, and heartaches to spare, and all of whom are united in their struggle to better themselves in post-war Japan by whatever means necessary.

They reside in an old mansion overlooking Osaka. We meet them when Yumiko Tsuyama, a potter by profession, journeys up the hill enquiring about the use of a printing press and then a room to rent when she finds the place has a well and a kiln. As she wanders through the mansion’s courtyard, both she and the audience encounter a colourful collection of characters in their cosy but slightly tumble-down dwellings. There’s a scientist obsessed with bees who keeps a beehive in his room, a wannabe-geisha from a small traditional town who brings her clients home, a low-level gangster and panty thief who sells porn, a married couple expecting a child, and a married couple already with one. Throw in some refugees from Tokyo, one of whom is an old army sergeant and cabbage roll seller, and a female rice merchant turned bootlegger and a landlady who scrapes as much money from her tenants as possible, and you get the small community at the heart of the film.

The de-facto headman of this tiny village is Yoda Goro, an eccentric jack-of-all-trades who is both charming and vulnerable because of his good-natured simplicity and naivety. His fellow tenants listen to and depend upon his prodigious skills and intelligence to solve thorny issues because Goro is a multi-hyphenate talent – writer, academic, lawyer, cook, negotiator, linguist, electrician, engineer – despite 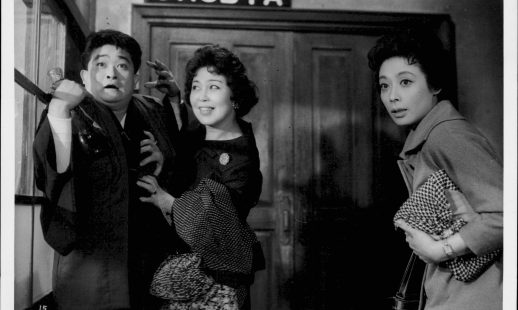 being unqualified in all areas. His skills and knowledge are such that he is almost always right and he has written many How To books – How To be a Geisha, How to be a Government Minister etc. Alas, his inability to turn away people in need leaves him susceptible to unscrupulous manipulators who take advantage of him including his fellow residents in the mansion. Due to his actions, he feels like a massive fraud, a source for discord between him and Yumiko who wants him to accept her love. As far as he’s concerned, he’s not worthy and he needs to find a way to be true before he can be hers. Through these characters, hijinks ensue.

Yumiko is initially our way into this group until her story thread is sewn into the fabric of this community. As she wanders into the courtyard to use the kiln or to Goro’s room to utilise the printing press, we witness the everyday antics of the others such as the beekeeper who creates an amazing aphrodisiac made from the secretion of bees which affects various characters in the area, Yumiko’s romantic feelings for Goro, and the drama of a student who will do anything to get Goro to sit his exams which involves press-ganging the man to go to Fukuoka.

With each sequence, Kawashima sets up scenes and plot points that will come into play later with neat camera placement and blocking so that the actors can breathlessly enter the narrative and display their quirks and start their stories before moving on and reappearing later. This film is powered by characters who are all interesting because of their flaws which they overcome with gusto and wit. There is an old-fashioned innocence to their actions so that even the most malevolent person doesn’t seem so bad. Nearly everyone is an  amiable perv to begin with, even the women, but underlying their desires are darker notes of crime, suicide, and guilt. What keeps the film from tipping over into seriousness and misery is that they all have feisty fighting spirits with varying levels of generosity of spirit and unique attitudes that are hilarious to see clashing. More is given to us later as we get involved in their lives and a wider patchwork of Japanese society is unveiled, especially with Goro’s trip to Fukuoka and the way he bumps into old war comrades.

While one might see this as Osaka lowlife on display, what one feels is the sense of renewal and energy as men and women try and stake their claim on happiness through gutsy actions and desperate romance. There is the intense work and intense play that one associates with Japan but it is all melded together as characters drop any notion of formality and proper order and just plough on with what they want to do – lighting cigarettes during university tests, gazing at stars at night, evading the police, relaxing in a restaurant. Not even arrests, death, and disappearances can stop them.

It all takes place in the rebuilding process of Japan following the war and a spirit of wonder and excitement can be felt and with the Tsutenkaku Tower in the distance (I spent some of the movie puzzling over the distances between locations) all the way through to the distinctive domed building that is city hall which Yumiko frequently walks by, seeing old Osaka is fascinating as the countryside and suburbs and onsen have a character of their own. It’s a reminder that Japan is a nation made up just as much by fields as it is by cities but the main draw is the mansion.

What makes the place feel homely and the community bond strong is definitely the setting as Kawashima imbues the spaces with life. Paper-thin walls and the tight living quarters make a close-knit feeling rise especially as characters are on top of each other (sometimes literally) but it is the clutter and character that really sells the place. Kawashima and his set designers create rich mise-en-scene from detailed set design full of symbolic items which reflects the characters whether it is Goro’s workshop which is full of equipment, the bootlegger’s room full booze and pantyhose, or the family homes which are full of the accoutrements of different lives. It all feels individual and lived-in and the camera shows this and it allows the film speaks of the richness of these characters and their brief moments of togetherness in such fond and affectionate ways that it is hard not to want to join them for drunken parties and farewells.

One character says, “life is nothing but goodbyes,” and audiences may feel the same way but I can guarantee that at the end of this film, you will want to stay in the company of this cast of wonderful characters as you get to know about their dreams and desires, flaws and charm points, such is Kawashima’s ability to get charming performances from his actors and the way they are affectionately treated.