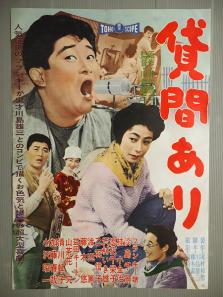 This comedy gem was programmed by Britain’s Japan Foundation for their 2018 Touring Film Programme to celebrate the centenary of Yuzo Kawashima (1918 – 1963), a master

of satire who was little-known outside of Japan until around the 2010s when festivals like Berlin started programming restored prints of his films. The Japan Society in New York also recently screened a number of his films so his profile is rising. Closer to the UK it is hard to get many of his titles but we have one film at least, “Bakumatsu Taiyoden” (1957), which was released via Eureka’s Masters of Cinema label and it proved to be a funny ensemble comedy set during the Bakumatsu period when the shogunate was coming to an end. This historical setting is, according to experts, an outlier for what Kawashima was known for which was telling tales tragedy and comedy in the lives of ordinary people in post-war Japan, a nation in flux as people returned from colonies and front-lines, emerged from rubble-strewn streets and charred houses, to find a more liberal set of ideas taking root in the home islands with traditional social structures being modernised, cities being rebuilt, and everybody on the make. Indeed, it seems Room For Let is more representative of his output and some suggest it even goes as far as to act as a link between the formalised Golden Age of cinema and the New Wave as the chaotic sense of change and oddball personalities are captured on screen with class and plenty of ribald humour. Seeing it as part of the Japan Foundation Touring Film Programme 2018 with a friend was great but having the privilege of seeing a rare 35mm print was fantastic as we were taken back in time to 1950s Osaka!