Memoirs of a Murderer 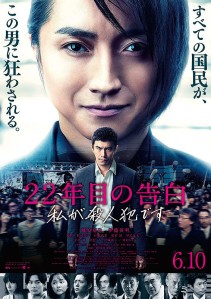 Memoirs of a Murderer is an exciting thriller based on the Korean movie Confession of Murder (2012) and made with the backing of Warner Bros. This one comes packed with stars like Tatusya Fujiwara (Battle Royale, Parade), Hideaki Ito (Princess Blade), Kaho (Our Little Sister), and more, all of whom take on this is a visually engaging film with a plot that will suck you in. I must admit not having watched the Korean original but perhaps this helped me to enjoy the silly spectacle.

Everything starts in 1995 and a serial killer is on the loose in Tokyo at the same time that the Great Hanshin Earthquake strikes Kobe. The killer’s M.O. is to strangle his victims and have a witness, preferably someone related to the victim, close at hand to see his awful work and powerless to do anything about it, then walk away to tell the tale.

Detective Wataru Makimura (Hideaki Ito) is part of a team trying to catch the killer but despite getting close, it all ends with a deadly trap set by the killer leaving some of the team injured and Makimura’s partner injured. The killer escaped justice.

22 years later, just after the statute of limitations has passed, a mysterious man comes forward with a murder memoir, “Watashi ga Satsujinhan desu” (“I am a Murderer”). Free from the threat of prosecution, the author, the handsome and urbane Masato Sonezaki (Tatsuya Fujiwara), confesses to the crimes and begins a publicity campaign of apologising to the victim’s families. His actions online and offline boost the sales of his book and he becomes a celebrity which infuriates Makimura who is torn between getting justice for the victims and protecting Sonezaki from vengeful relatives of the dead. Things get more complicated when a celebrated war correspondent and prime time journalist named Sendo (Toru Nakamura) gets involved and invites Sonezaki onto his show, News Eyes, to understand the motive of the killer.

Audiences will be wondering, just why would anyone come forward to admit to being the killer and what will they gain. In reality, people who commit these crimes serve two sentences, if caught, one in prison and if brought to justice, the infamy that will remain with them forever. Killers who manage to live life outside of prison, such as Issei Sagawa, find themselves stuck in a negative feedback loop where they are doomed to be the guy who did the horrendous thing and forced to talk about it, re-enact it, and analyse it over and over and live with the shame and guilt. That idea is played with here and mixed with a critique of society and its rapacious need for scandals and idols as Sonezaki, played by Tatsuya Fujiwara at his slickest and slimiest, fronts ridiculously over the top press conferences the theatricality of which will leave a cinema audience in stitches, low-rent net shows, and scandal mag interviews, all of which create infamy and sales for his book.

No media opportunity is missed as he harasses the witnesses of his crimes and tries to arrange interviews. His claim about seeking to bring closure and atone for his sins are all lies as exposed in scenes where he threatens his book editor, a ghoulish and tough cookie named Marika Matsumoto. Irie gets great mileage from showing the way society reacts to this latest enfant terrible with constant feedback from net-users and talking head interviews, variety shows and newspaper headlines filling the screen, What he has to say is not flattering as people line up to condemn or glorify this man confessing to these horrendous crimes. Fans appear on television and in book signings, and while scenes of crowds cheering Sonezaki on feel a little overdone, the satirical critique of the way that the media uses scandal feels bang on and it is delivered with such gusto that it is easy to swallow.

Well, easy to swallow for cinema audiences, the cast of characters who are victims of Sonezaki’s murders, a diverse bunch including a doctor, a book-seller, and a gangster, all of whom have a grudge to settle and add a lot of tension to the plot as you wonder if one of them will take a shot at the serial killer. All violence against the killer is justified in this as we see what the survivors saw in horrific flashbacks. The trauma still lives with them as good acting from Kaho et al testify. The real lightning pole for most of this movie is Hideaki Ito as detective Makimura, a solid hero character with a seemingly short-temper. Having to balance all of whether to side with the victims or do his duty, his moral conflict is a good driving force for the film. Ito brings enough physicality to the role to make him a scary bruiser but there’s the sense of justice in him so seeing him torn makes for great drama.

Hovering somewhere between justice and vigilantism, the tension ramps up with every dangerous situation that is introduced such as a book-signing which turns into a brawl after a failed hit. The line between good and bad blurs with every moral choice that Makimura has to make. When you find out his backstory, your heart will go out to him but just when you think you have everything figured out, the film goes completely haywire and a tad melodramatic but in a good way. Chaos emerges, the sort of that will have you grinning ear to ear and desperate to see the finale and whether our square-jawed hero will be able to catch the killer or not.

Yu Irie delivers everything with a slickness more attuned to Korean films as he uses his visual inventiveness to keep the film moving, dolly zooms (so many!) for dramatic purposes, match-cuts to transport viewers around Tokyo in seamless ways, and different film-stock for various effects such as dating time period. Constant use of primary news footage and narration also adds to the atmosphere and serves a narrative function as we see time zoom by from the ’90s to now with Tokyo Tower playing a prominent role. How and why, I’ll leave for you to discover but my experience watching this was a great time where I was shocked, surprised, shouted and groaned at the plot-twists.

This is not the most profound film but it uses its material well to make a great entertainment film that will deliver a good night for audiences who want to see some action.