Director Gakuryu Ishii made his name with crazy indie films fizzing with punk energy, works like Burst City (1982) and Crazy Thunder Road (1980), but that is just one aspect of his career since he has an imagination capable of covering different genres from gloomy serial killers films like the brilliant Angel Dust (1994) and talky apocalypse movies like Isn’t Anyone Alive? (2012). I recommend watching them but of his other works, The Crazy Family and August in the Water are my personal favourites. Most of his films burst with voluptuous visuals and costumes, dense dialogue, and big name actors and over his long career he has maintained his flare for shooting scenes in energetic ways, something much needed here in a story that takes a while to get traction despite an exuberant performance from Fumi Nikaido as a goldfish turned human.

Based on a 1959 novel by the author Saisei Muro, Bitter Honey is set in 1950’s Tokyo. Although shot in a few outdoor locations like a yokocho, some streets, and temple grounds, most of the action takes place indoors, particularly the well-appointed house of an old male writer (Ren Osugi) who is busy making works of literature that will stand the test of time. Well, he would be if he wasn’t enthralled with a red goldfish who is able to transform into a beautiful voluptuous young woman (Fumi Nikaido).

Said goldfish possesses a pure and sensuous side and she uses it on the old man who she calls “Ojisama” and runs rings around, rolls around, dances around, and so forth. Nikaido does cute better than any other actress in Japanese cinema today and she martials all of her cuteness into the performance, capturing the childishness inherent in being a goldfish turned human, roaming town in fancy dresses, speaking childishly and luxuriating in her physical form.

Just as the old writer dotes on her and enjoys being wrapped up in her beauty, so does the camera which lovingly circles Nikaido as her orange clothes coil around her twisting body when she does a perky dance, offers close-ups of her perky smile, and follows her perky presence as she bounds across tatami, down cobblestone paths, and up wooden stairs.

She is a male fantasy. Bounding through places with boundless balletic grace, Akako’s dresses glide and flow over her body as childish dialogue spills from her mouth. Everything from the costumes to the dialogue is fish related – the dresses match the colour of her scales and form fins/tails which get torn by neighbourhood cats etc. Through this ability to transform come the gags – seeing Osugi wrapped up in her tail in bed in a state of ecstasy – miscommunication – the desire for sex – and the gags about fish form that sometimes serve as double entendres, “That’s for tailing me!” “Daddy can’t resist my tail.” 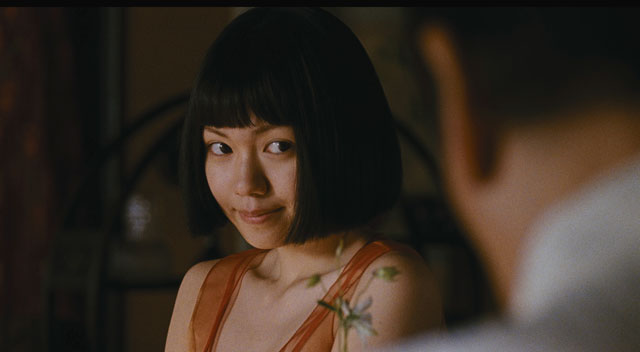 Dressed in the style of the 1950s and with an attitude of an ingenue dedicated to her man, she brightens the screen with her naivete and passion and she believes the old writer loves her…

… until, one day, the ghost of Yuriko Tamura (Yoko Maki) appears and doubts begins to creep in. She is a woman the writer knew in the past. Dressed conservatively in a gorgeous white kimono, she hovers at the edge of scenes and just in shot as Maki imbues her character with a hesitancy that belies her passion which is teased out through dialogue. As the writer states, she wrote about the fear of being intimate with men, and one suspects he was the subject of that fear. Whatever the case, she is drawn to him and shows up to ruin scenes in comedic ways. She too, comes under the influence of the goldfish – witness the dance sequence and unlocking of passion. She also helps the fish actualise more of a personality – desire for the name Akako and taking the relationship with the old writer to the next level.

However, a spanner is thrown in the works… There’s a third woman in the wings, Ms. Maruko (Hanae Kan – fantastic in the lead of Yamato California). A vulnerable person seeking stability in turbulent times of post-war Japan, the writer can’t resist her.

Will any of these women be able to understand the old writer? Does he deserve them? Can they capture his heart?

He is a faithless man and, although he gives lectures to ardent fans, it is clear his work isn’t up to much these days. With all of these woman lined up for the old writer, there’s the sneaking suspicion that this film is titillation for men, something that comes up every time Nikaido is on screen and calls the writer “Daddy”.

It would all be a bit sickening if it wasn’t for a lynch-pin scene near the final sequence.

Kengo Kora, so good playing unworldly characters and norms (A Tale of Yonosuke, The Drudgery Train), burns the screen in the few scenes he has here portraying Ryunosuke Akutagawa, a former friend of the old writer. His physicality has something of the decadent devil in him with that wild hair and his arched eyebrows and his knowing gaze that seems to be able to read the true desires of people. A conversation over cups of sake he conducts exposes the frailty of the ego and body of the old writer and reveals the truth: Osugi’s character is a writer looking at the dying embers of his career and life and desperately trying to recapture the skill of his youth and he is also haunted by his own family background, two things which explains his constant need to exploit the lives of women around him. It is an amazing scene giving life to what was hitherto amusing but hollow film. It pumps with pathos for the man and shows that, for all his ridiculousness, he is vulnerable and fears his mortality and deserves some empathy.

Ren Osugi does a good job of making his character a complex mix of ornery, lecherous and sympathetic to cover up his wider fears. Once exposed, your heart will go out to him.

Thankfully, a similar empathy is given to the female characters who get endings that, while tragic, are beautiful and the writer acknowledges his selfishness and debased nature. Perhaps the writer’s failings should act as a warning to audience members – pay attention to your loved ones.

The film attains a haunting quality and profound sadness through seeing love lost and potential wasted. Between that and the period details in set and costume design and the sumptuous musical score, it turns out Bitter Honey is a worthwhile watch, especially the end which suggests we can all be saved by art and love, two things that make human existence worthwhile.

Now, if only I could get a dance with a goldfish that turns into a human that looks like Fumi Nikaido…