The Night is Short, Walk on Girl

The Night is Short, Walk on Girl is the latest film from anime auteur Masaaki Yuasa and his studio Science Saru. One of two award-winning movies he has released in 2017 (the other being Lu Over the Wall which took top prize at Annecy), this film is the very definition of the word exuberant in terms of story and style and should cement Yuasa as one of the best anime directors around.

The narrative is simple: A black haired girl (voiced by the ubiquitous and super-talented Kana Hanazawa) is attending the wedding reception of a friend. As far as she is concerned, the party doesn’t have to end there and she walks around the streets of Kyoto at night from the alleyways and izakayas of Pontocho to the university campus, following the Komagawa river and making detours along the way. She is pursued by a male admirer, Sempai (voiced by the musician Gen Hoshino who also played the hapless lover in Why Don’t You Play in Hell?), who tries to catch her attention by appearing before her as often as possible. As this rather one-sided romantic dance unfolds, they experience surreal magical-realist moments that grow increasingly absurd thanks to a cast of unique characters, all of which tests Sempai’s resolve in love and the girl’s capacity for drink and fun because all the while, everyone keeps drinking and having a good time. 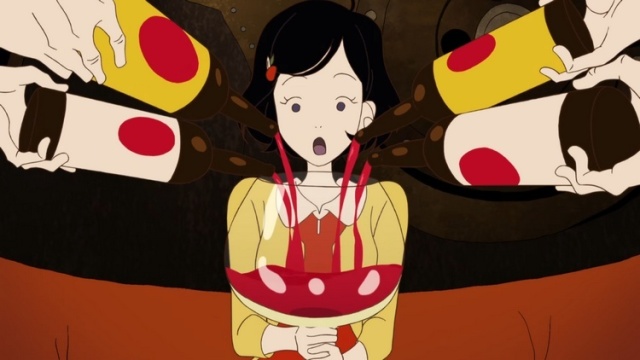 Bar crawls are only fun in the right company and the cast of fun and fantastical characters are a joy to be with. The girl with black hair is the locomotive engine taking us from parties full 60-something salary-men and ladies to fresh-faced university kids and crazy shunga collectors. Cross-dressing wannabe spymasters with an army of goons chasing second-rate stage actors performing guerrilla plays across divert her journey while a tengu and a god of used-books seemingly hijack the ride. At first, it feels chaotic and random but the drink-fuelled hi-jinks and merriment, emotional confessions and ridiculous philosophical discussions and epic eating and drinking contests with demi-gods keep the film lively and it ALL comes together at the very end of an insane sickness-fuelled fever dream to make a fantastical love story powered by the magical city of Kyoto and its inhabitants.

Masaaki Yuasa made his feature film directorial debut with Mind Game (2004), a film that wowed critics and audiences alike thanks to his audacious approach to animating a single story with a multitude of styles in different sequences ranging from using live-action actors to scrappy and experimental hand-drawn creations. As his projects have gotten bigger, his works have retained that ability to be surreal, warped, energetic, and daring in design, direction, and art.

Yuasa’s film takes the distinctive character designs of Yusuke Nakamura and brings them to life in a Looney Tunes manner through imaginative and lively animation which makes the cast burst to life with funky and funny rhythms, their malleable bodies and thinly-sketched faces ready to be deformed or change colours in funny ways by the food and drink they consume and the emotions they feel. Actions flow smoothly in the set-up of some physical gag before exploding with exaggeration as the punchline hits. The characterisation is strong because of these elements before the fantastic voice actors are even heard. 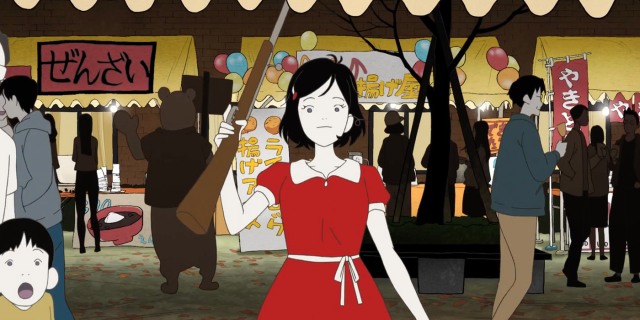 The magic that Yuasa works on bringing people to life on screen extends to the city they inhabit as colours and designs pop and fizzle with such vibrancy that it is hard not to feel awe of the various locations, a pull of the heart for the romanticism of seeing Kyoto. The trees with their cherry-blossom pinks against the midnight blues of the night skies with warm arcs of yellow from the lanterns of Pontocho, the intense furnace-hot red of a hellish fire boiling a huge pot containing nabe and the radioactive green of mucous from an especially brutal cold.

The more surreal and emotional things become, the more inventive the visuals as thoughts and ideas come to life. The world is doused in blue as the girl enters a sea of books and clothes float around. She steps on islands of books and climbs the rickety scaffolding of someone’s neuroses to get closer to them. The stark blocks of custard yellow and pinks that characterise a flashback to a moment of love at first sight, the funereal tones of a city experiencing a fierce storm of sadness and loneliness, the bright colours of the girls clothes (collected from other people) being the thing that draws our eyes across the fantastically designed and drawn backdrops as she journeys to a character who doesn’t feel loved. Of course, as the metaphysical poet John Donne said, no man is an island and the film shows that everyone is connected and the girl is vital in this as she brings all the events and people of Kyoto together and things remain light and fun as the girl with her positive attitude brings joy to others. It is always full of heart and orchestrated to perfection with a lot of depth as the beautiful locations and Japanese mythology blend perfectly to make the film surreal at points but believably and naturally so.

This sort of design is seen in all of Yuasa’s titles even when he’s working on adaptations of manga and books with strong character designs already in place. Just look at his work on Ping-Pong: The Animation (based on a manga by Taiyo Matsumoto) and Tatami Galaxy (also based on novel by Tomihiko Morimi and with cover art Yusuke Nakamura). Indeed, Tatami Galaxy is key work connected to this film and there are many callbacks to that in terms of characters reappearing though you don’t need to have watched it to have fun here. A sense of humour and adventure is all that is needed for this deeply universal story of love, friendship, and excitement. A knowledge of Japanese culture gives it a HUGE amount of depth – the red string of fate, gods and demons, but what carries all of this along are the foolish and emotional mortals with distinct personalities animated to have so much life you’ll be charmed by them and their comic romantic escapades. 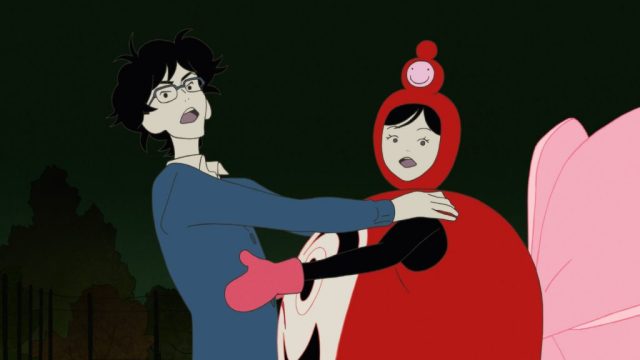 At its base level, the film is a celebration of the connections between people. Those we meet purposefully and those we meet seemingly at random at a bar or book-fair. They are the people we are destined to meet. The acts we perform, hopefully positive, will find their way to others and back to us. As anarchic and absurd as things seem, there is a logic to everything so just sit back and enjoy the ride as our girl with black hair takes us on a tour of a wonderful city full of people having a good time. You will be glad to have made the acquaintance of all these characters.