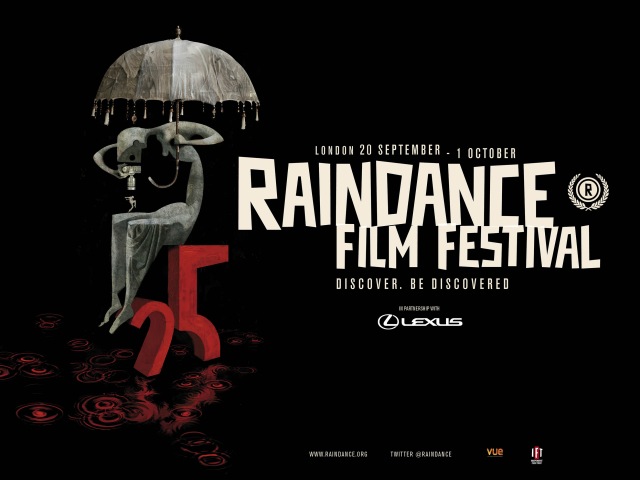 The Raindance International Film Festival returns to London on September 20th and runs until October 01st and it is celebrating 25 years of screening independent films. The venue has changed to the Vue Cinema in Leicester Square but there’s still a megaton of indie films for people to gorge themselves on. Here’s the amusing trailer for you to get hyped with!

This year’s line-up of Japanese films is pretty awesome. The opening film is Oh Lucy! which will be shown prior to a 90s-themed party at Cafe de Paris. There are seven other feature films and one documentary which will be screened over the course of the festival. I’ll list them below (click the title to be taken to the film you want to see).

Atsuko Hirayanagi attended NYU Tisch School of Arts in Asia and holds a black belt in karate. She came out with a number of short films including the award-winning short Oh Lucy! (2014) which was screened at the Toronto International Film Festival and was developed into this project that was screened at the Cannes Film Festival earlier this year. Critics gave the film praise and it’s pretty awesome that it’s the opening film for this year’s Raindance. You can read more here but it’s an inspiring story and the resulting film looks great.

Director Atsuko Hirayanagi and lead actor Josh Hartnett will be at the film’s premiere to take part in a Q&A on September 20th.

Here are two clips and the trailer:

Synopsis from the filmmakers: The drama-comedy tells the story of Setsuko Kawashima (Terajima), a lonely, chain-smoking office lady in Tokyo who is past her prime. After deciding to take an English class, she discovers a new identity in her American alter ego, ‘Lucy,’ and falls for her instructor, John (Hartnett). When John suddenly disappears, Setsuko earnestly sets out on a quest to find him, eventually leading her to the outskirts of Southern California.

Love and Other Cults 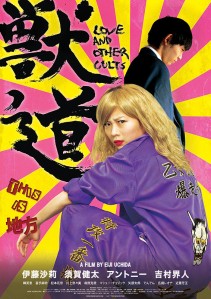 This is the latest film from Eiji Uchida, director of Greatful Dead (2014) and Lowlife Love (2016). It was produced by Adam Torel of Third Window Films, a person who did a lot to build up the profile of Japanese films in the UK and he has made another cracking title with this twisted romantic saga. This review by Elizabeth Kerr from The Hollywood Reporter makes it sound like a worthwhile watch full of great performances from its young cast:

“…Love and Other Cults packs a boggling amount of narrative into its lean 95 minutes. At times it can feel like too much, but Uchida juggles his characters’ various arcs efficiently, making every frame and line of dialogue count. An energetic pop-punk sensibility keeps the film moving at a breezy clip…“

The film is very accessible and not as abrasive as Eiji Uchida’s earlier works but it still gets dark. Sairi Itoh gives a loveable performance as a lost lamb looking for love in all the wrong places and she is sure to charm audiences. Third Window Films announced that Eiji Uchida will be at the festival for a Q & A with Sayaka Smith, and the film’s producer Adam Torel so be sure to attend this screening and ask some interesting questions on September 27th.

Synopsis: Ai’s (Sairi Itoh) has never had a stable home. Her religious mother stuck her in a cult and then she lands with a gang of drug-users and dropouts, a traditional nuclear family and worse. While she bounces around different environments, her classmate Ryota (Kenta Suga) follows a similar path as he falls in with a gang of wannabe yakuza. They harbour feelings for each other but will they be able to express them? It turns out that the two are star-crossed lovers of sorts, destined to meet each other in unsavoury circumstances

Synopsis: Kuma (Lily Franky) is disabled, suffering from congenital cerebral palsy, but despite living most of his life as a wheelchair user, he likes sex and so he became an activist for sex for the disabled. He meets Mitsu (Nana Seino), a prostitute who suffers from a personality disorder, and gradually starts opening his heart to her. Their ultimate love has the power to destroy social barriers and their own personal obstacles.

Like looking at videos from home since I spent so much time in and around Akihabara. Minus the violence of course. This looks like a heartfelt drama from newbie director Yusaku Matsumoto who has a credit on a horror movie as an editor. The screening on September 26th includes Q & A with the director Yusaku Matsumoto and two of the film’s actors, Urara Anjo and Kentaro Kishi, so please make them feel welcome.

Synopsis from IMDB: Eight years have passed from the Akihabara massacre. A pop star whose mother was killed in the incident, a teenager who left her home to Akihabara, a delivery boy who turns his directionless anger to the city. This is a story about the characters striving to grasp the string of hope within the darkness surrounding the city, the incident, and the people.

I saw this psychological chamber piece at the Osaka Asian Film Festival earlier this year. It’s an interesting title which won over a lot of the serious critics who viewed the film. It all hinges on the central performance of lead actor Chise Ushio and the cruel world that Koji Segawa crafts for her. Don’t worry, it’s not all bitter and angry. There’s black humour and a neat ending. It’s great to see that it is travelling around the world and it would be interesting to see what a UK audience makes of it.

Director Koji Segawa and lead actor Misa Namba will be present for a post-screening Q&A which takes place on September 21st.

Synopsis: Mariko, a seemingly normal housewife, has been together with her younger husband named Tomoharu for six years and has been dissatisfied every day. Despite having a son together, Tomoharu is often absent from home and she suspects he might be having an affair. Her workplace, a batting center, is also a miserable environment because the sleazy manager chases after her and the customers are rude. With constant pressure bearing down on her in public and private, Mariko becomes dominated by a certain obsession that eats away at her perception of reality.

This is a Japanese indie film that benefited from crowdfunding and a lot of super talented collaborators ranging from Hollywood types to real-life bands such as The Privates and The Neatbeats and the 50 Kaitenz. Essentially, a bunch of cool-looking guys inspired by British bands such as the Beatles, Buzzcocks and others. Mike Rogers, an American who has lived in Japan since the 80s, also has a rock background. The trailer makes the film look like a lot of fun. To find out more about Ghost Roads and the people behind it, read this blog entry. Ken Nishikawa, Mike “in Tokyo” Rogers will be at the festival’s screening on September 25th for a Q&A.

Two of the film’s four directors will be at the festival’s screening on September 25th for a Q&A.

Synopsis: Tony (Mr. Pan) is the lead singer of The Screamin’ Telstars, a retro rock band who have been struggling for recognition for years. One day, their leader, Tony, goes to buy a guitar amp but little does he know that it’s haunted by the spirit of an old blues guitarist who will offer him a Faustian pact in exchange for fame. Tony gets everything he’s dreamed of – but with a hidden catch…

This has been paired up with the British short film Johnny Jeana : Portrait of a Tokyo Rockabilly (Dir: James Partridge, 7 mins). It’s all about the eponymous Johnny Jeana who “keeps 50s Americana alive in the heart of Tokyo. In this film, we delve into Japan’s Rockabilly culture and Johnny’s dreams of superstardom.”

This is a stop-motion animation from Takahide Hori. It’s based on a short he spent four years developing by himself and it is available online to watch. The feature film was crowdfunded (update: it didn’t reach its goal) and he needed as much cash as possible if he was to quit his job and develop the film full time. I’m not sure if he did quit his job but Junk Head has been invited to many different film festivals! Well done, Takahide Hori! You can read the crowdfunding story here.

Synopsis: Some time in the future, humans have lost the ability to procreate. An explorer is sent underground to investigate tales of human mutants…

Kazuyoshi Kumakiri (My Man, Sketches of Kaitan City) brings the drama with Go Ayano (The Light Shines Only There) in this film which looks visually sumptuous judging by the trailer. The screening on September 30th has a Q&A attached with one of the film’s producers, Hideki Hoshino.

Synopsis: Kengo Yatabe (Gou Ayano) was an accomplished kendo practitioner but he suffered two tragedies: his mother passed away and his father, also a great kendo master, is now in a vegetative state. Kengo lost his will to live and lost the will to keep practicing kendo after an incident and he is reduced to spending his days drinking and working as a security guard in Kamakura. Another Kendo master tries to shake him out of his stupor by sending a rap-obsessed high school student named Tooru Haneda (Nijiro Murakami). Tooru also has a talent for the martial art but will it be enough to pull Kengo back from destruction?

This is a documentary produced by the American Ian Thomas Ash who is a skilled documentarian himself (his works have played at Raindance in the past) and it received its world premiere at Nippon Connection. The screening on September 28th includes a Q & A with the film’s producer Ian Thomas Ash and the film’s Director of Photography Adrian “Uchujin” Storey.

Synopsis: As the title suggests, it’s all about the world of gay prostitution in Tokyo. The film crew travelled to Shinjuku 2-chome, a neighbourhood is considered to be “the gay center of Asia” and a place with a connection to prostitution since the 17th century. Here you can find the highest density of establishments catering to homosexual customers in the world, a place where many young and mostly straight boys sell their bodies. These guys are called “Urisen” and they have lots of stories to tell. The documentary looks at a number of subjects and gets their backgrounds, how they were recruited, and how they live now and it gets the story through talking head interviews and animation.