The Nippon Connection Film Festival takes place from May 23 to 28, 2017 and it will be held in Frankfurt am Main. The organisers released details of the 100+ short and feature length films which will be screened and there are many top titles that will allow audiences to get a perfect snapshot of the myriad of stories and talents that the Japanese film industry is producing.

In terms of anime we have two of the most critically acclaimed movies in recent times in the shape of A Silent Voice and In This Corner of the World. There are also some CG and stop motion movies that might not normally get seen outside of festival spaces as well. Nippon Connection also continues its trend of highlighting new voices by working with the film academic Catherine Munroe Hotes and using her special programming skills to bring the latest in indie anime

What is on the programme, then?  You can view trailers and more details for each on the films by clicking on the links:

In This Corner of the World 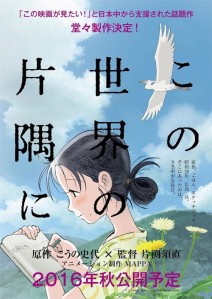 This is an award-winning film that I had the pleasure of seeing with an audience in Hiroshima and there were tears aplenty towards the end of the film. I wasn’t the only one impressed since the film won the Hiroshima Peace Film Award at the Hiroshima International Film Festival in November last year and the film magazine Kinema Jump named it the best Japanese movie of 2016 and awarded Sunao Katabuchi the Best Director Award. Not only that, it took the Animation of the Year award at the 40th annual Japan Academy Awards. I am not surprised since it is a beautiful and stately film about an absent-minded artistic young woman trying to survive the hardship of war.  beating the anime.

The film was orchestrated by Sunao Katabuchi who directed the awesome Mai Mai Miracle and the TV anime Black Lagoon. It was animated by the studio MAPPA (Shingeki no Bahamut: Genesis, Terror in Resonance) and it will be released in the UK in June.

Synopsis: Suzu Urano is a Hiroshima girl from a close-knit family but when she marries a naval officer, she has to move from Hiroshima City to Kure, the city which launched the battleship Yamato and the site of one of Japan’s largest naval bases. As a new housewife, she encounters uncertainty in her new family, her new city, and her new world but she perseveres and finds happiness even as the war grinds on and comes closer to home. 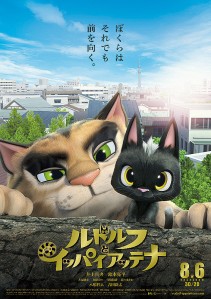 Whilst this one won’t be high on my list of films to catch up on (there are too many to cover), it has gotten good reviews and it looks like an entertaining film for all of the family. Mark Schilling over at the Japan Times says,

“…the film’s animators have done an impressive job of making their cats walk, jump and otherwise behave like actual felines, when they aren’t comically acting human. And they have made Japan look three-dimensionally real in every finely observed detail…”

It is screened out of competition.

Synopsis: Rudolf is a cute cat currently enjoying a life of comfort and care in Gifu, Japan but when he lets his curiosity get the best of him he finds himself carried away to Tokyo in the back of a cargo truck. Alone in the metropolis, he faces new dangers but he befriends Ippaiattena (Japanese for Gottalot – got a lot…), a seasoned street cat who has a crucial and unusual skill that will help him find his way home: the ability to read the human language.

The other super-hot feature-length anime at the festival is this one! There are many anime movies released in Japan but this one has charmed critics and audiences around the world. It is a story about a bully who tries to redeem himself by asking for forgiveness from his target, a girl who is deaf. The film comes from Kyoto Animation (watch Hyouka, an awesome TV anime, to get to know them) and it’s directed by Naoko Yamada, one of the most promising female directors going.

Synopsis: Shoko, a young Deaf student, transfers to a new school where she is bullied by Shoya for her hearing impairment. While Shoya originally leads the class in bullying Shoko, the class soon turn on him for his lack of compassion. When they leave elementary school, Shoko and Shoya do not speak to each other again, but Shoya, tormented by his past behaviour, decides he must see Shoko once more to atone for his sins – but is it already too late?

“Poetic Landscapes” is a collection of indie animation and it lives up to its title by featuring films that “look upon the world through a poetic lens.” It’s curated by film scholar and journalist Dr. Catherine Munroe Hotes (here’s her excellent blog), someone who has worked closely with Nippon Connection in the past to highlight lesser known and some of the newest animation from Japan. She will be in town to showcase these films personally.

Tokyo University of the Arts Animation

According to the Nippon Connection website, Tokyo University of the Arts is the oldest national art university in Japan and its Department of Animation was established in 2008. Since then, it has produced world beating animators who regularly appear at international festivals with new and innovative works. Nippon Connection continues to support these arts by presenting a selection of the best graduation shorts and the films are presented by Taruto Fuyama, a filmmaker and professor at Tokyo University of the Arts.

Here’s a trailer featuring clips from all of the films: 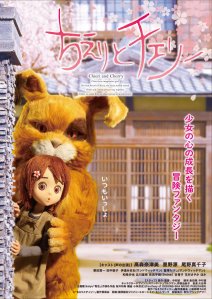 Makoto Nakamura has had a long career making TV anime such as Yuri Kuma Arashi, Coppelion, as well as OAVs and films such as GYO: Tokyo Fish Attack and Hotarubi no Mori e. Chier to Cherry is his directorial debut on an original work and it was inspired by ideas in Russian animator Roman Kachanov’s 1967 The Mitten short. After being partially funded through a crowdfunding campaign last year it made its debut at the Tokyo International Film Festival.

Synopsis: Chieri is a 6th grade elementary school girl. Her father died when she was little, so she lives with just her mother. The only friend of Chieri had been a stuffed doll Cherry which she found on a storehouse at the time of her father’s funeral. In Chieri’s world of fantasy, Cherry had talked and played with, and adviced and protected her in place of her father. Chieri visits her grandmother’s house for a first time in a while to attend her father’s remembrance ceremony. There, she finds a stray dog being about to give birth to puppies. But a crow and strange monster come trying to get the pups. Can Chieri and Cherry save their lives?

The events and screenings will take place at the following locations:

The festival’s website gives more information on locations and there’s the Google Maps service which is super useful in finding your way around town.