Alice in Earnestland is the debut feature-length film from Ahn Gooc-Jin, a dark and at times horrific tale of a woman who is brutalised as she is forced to survive and commit increasingly deadly acts of violence as she disappears down the rabbit hole of savagery.

The young woman at the centre of the story is Soo-Nam (Lee Jeong-hyun). When we first see her she has tied up Kyung-Sook (Seo Young-Hwa), a therapist who has been specifically chosen to listen to Soo-Nam’s tale of woe which is told through a lengthy flashback sequence. Soo-Nam starts off as something of an innocent abroad who marries for true love but eventually emerges as a bloody angel of retribution as she endures bad luck, money problems, and power-hungry greedy people who try to derail her happiness which she is determined to hold onto and it all links back to the local therapist in a neat way. 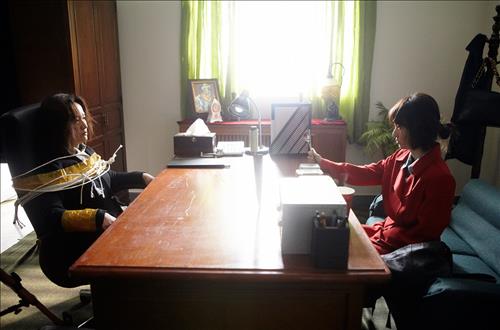 It starts when Soo-Nam is the age of 16. She is a star student and gifted beyond compare but her dextrous hands and “boobs as big as her hopes” make her a more attractive prospect physically and it quickly becomes clear that her small-town education was a waste that has left her ill-equipped for the big city, a world which is full of computers and better educated people. However, she perseveres and lands a job in a local factory where she finds true love with fellow factory-worker, a handsome and caring man named Kyu-Young (Lee Hae-young) who happens to be deaf. The two dream of getting a house and raising children together but despite their hard work happiness is not guaranteed and searching for a cure to his deafness leads to a shoddy operation conducted by greedy surgeons and this leads to him losing his fingers, his job and their hopes of buying a house.

It is pretty desperate stuff for Soo-Nam but despite being knocked down so many times she perseveres. To overcome these problems she works multiple jobs, her physical gifts coming in handy for delivering newspapers and cleaning. Soo-Nam manages to get their dream home but Kyu-Young, feeling depressed after his accident, attempts suicide and is left in a coma which adds to Soo-Nam’s debts. She proves her love is true by keeping him alive and continuing to work hard and when her house is in an area scheduled for urban redevelopment it looks like she will get a hefty compensation payment but this puts her on a collision course with residents in a neighbouring area who want the money for themselves and so Soo-Nam’s series of unfortunate events continues and becomes increasingly bloody, brutal, and bathetic as puffed up enemies emerge and get taken down by this cute but deadly woman who is willing to work hard to lead a good life.

Soo-Nam’s story is one of overcoming obstacles and there is mordant humour in seeing it executed. The set-up is a series of punchy sequences that shoot down her optimism and introduces a little social satire about how hard life is in contemporary Korea whether it is education or home ownership. The most impressive moments and things about the film emerge in the opening forty minutes because of the director’s eye for visuals and grasp on the films rhythm.

There is a sense of pace that keeps the film engaging as the action flows. The editing is inventive with things like screen wipes achieved through a character turning the page of a magazine onto the next scene while the camera is usually placed in interesting angles to capture the action. The texture of the film is sublime in parts, thanks to the strong mise-en-scene. Each shot, scene and sequence has a distinct look through art direction and set decoration you might expect from the likes of Park Chan-Wook. This is not kept up for the second half of the film when the violence begins to take up so much screen time. The pace drags and the way scenes unfold feels unexceptional for long stretches and this allows the audience to see past the dazzling visuals and see the banality of the plot emerge from the story.

The script starts off strong as one woman’s journey through contemporary Korea but it becomes flaccid as the stylised characters are merely hollow shells including the central protagonist. The comparison to Park Chan-Wook comes back to haunt the director Ahn Gooc-Jin since despite basing so much of the film on violent plot twists he is unable to match the operatic levels of other Korean directors. The black humour and melancholy characters emerge but are underwritten and so they are also lacking. Soo-Nam’s story is told at the expense of all other characters so events lose their impact. You inference things like she was sexually exploited (her teacher is a faceless monster a la the beasts of Silent Hill, who comments on her breasts) and you feel a vague sense of threat from some characters but there is never the motivation present or the sense of an interior emotional life for any of the characters which means the love story between Soo-Nam and Kyu-Young feels flat and the satire disappears. 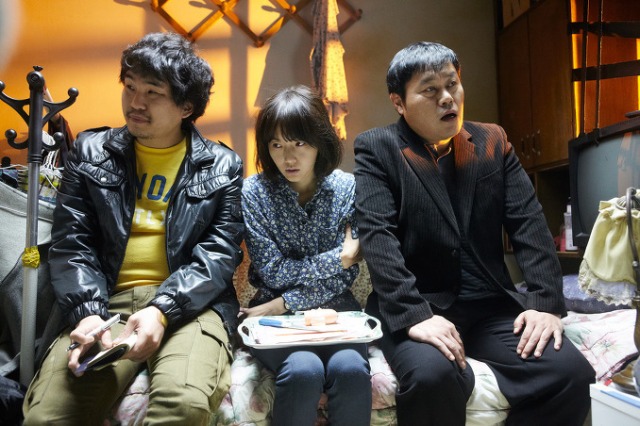 There are still great visual gags such as Kyu-Young’s lopped off fingers dumped in Soo-Nam’s pocket, a man with anger management problems positioned in front of a kettle blowing steam, Soo-Nam hurling a deadly piece of paper across a street, and Soo-Nam sat between two burly detectives in her cramped apartment and these are enough to sustain the film through its more conventional parts.

While there is some satisfaction in seeing how things tie up with the start and the therapist’s role in events is uncovered there isn’t quite enough to sustain interest in the characters beyond a superficial level and it will be easy to forget this feature film especially since the look of the film and the story lose cohesion. Some of the events are brutal and over the top and much more visual outlandishness is needed to deliver the events but the film runs out of energy. This is a solid debut which shows that the director has the potential to be brilliant but more work is needed to make it that much more engaging and meaningful.