Great news! The film distributor Third Window Films has announced a release date for Love and Peace! It will be out on DVD and Bluray from July 11th!!!

This announcement is on the appropriate day since it’s World Turtle Day and the film features a magical turtle!

Love and Peace is based on a script that Sion Sono wrote 25 years ago, around the time of Suicide Club. It is story is definitely from a time period when Sono was making wild films. This is a fantasy comedy of sorts about a sad-sack company man meeting a magical turtle and becoming a rock star! Taking the lead is Hiroki Hasegawa, the mad cinephile in the yakuza movie comedy Why Don’t You Play in Hell? and Kumiko Aso, the waif running around in Kiyoshi Kurosawa’s horror film Pulse. This as been labelled as one of Sono’s passion projects and a slice of the “real” Sion Sono. Reviews are all positive that this is a great title to watch!

“If you see just one new Sion Sono movie this year, make it “Love & Peace””
Variety

“Ambitious and silly, perfectly blending the surreal with the saccharine to create something that’s simply a joy to watch.”
Twitchfilm

“Visually stunning, endlessly creative, and it doesn’t fail to deliver on the kaiju promise!”
Eye For Film

Synopsis: Ryoichi (Hiroki Hasegawa) once dreamed of becoming a punk rocker but he became a timid salaryman at a musical instrument parts company. Life is calm but he has feelings for an office lady (Kumiko Aso) he can’t express and he feels he wants more from his circumstances which is when fate strikes!

One day, he randomly buys a turtle and names it Pikadon. A series of events occur and Ryoichi’s dreams of being a rock star might be about to come true! However, it might also lead to the end of the world…

It’s available to pre-order at Amazon. Fans of Sion Sono who live in New York can see his epic love story Love Exposure on the big screen next month when Japan Society New York screen it. 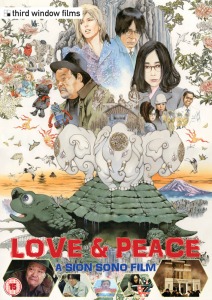 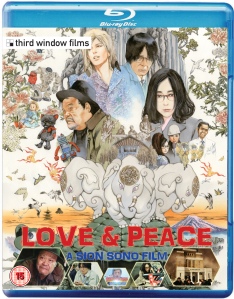 6 thoughts on “Sion Sono’s “Love and Peace” now available to pre-order! Out JULY 11th on DVD and BLURAY!”