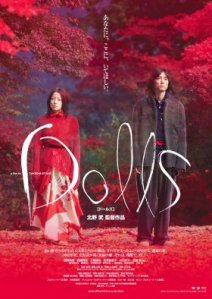 Dolls is a beautiful film about love, love that is betrayed and love that is lost and regained. It is a gorgeous film visually and aurally, absolutely stunning at points.

The film comes from Kitano’s desire to make a film about men and women experiencing a love that is all-consuming and tinted with tragedy was inspired by Kitano’s real life encounter with two bound beggars in Tokyo and the tragic love stories found in Bunraku plays of Chikamatsu Monzaemon who worked during the 18th and 19th Centuries. To explore these ideas the film consists of three romantic tales set in the modern day but with Bunraku’s influences heavily affecting the presentation and actions of the characters. 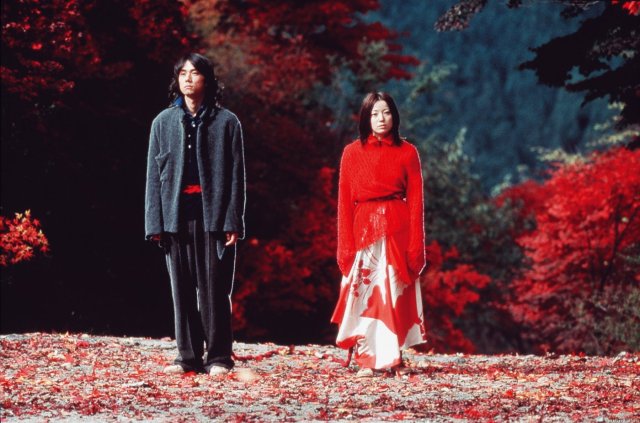 The first tale begins when a young woman named Sawako (Miho Kanno) becomes suicidal after her fiancé, Matsumoto (Hidetoshi Nishijima), breaks their engagement and leaves her to marry his boss’s daughter. When Matsumoto hears the news of a suicide attempt he rushes to Sawako’s side at hospital only to find she has lost her mind with grief. Matsumoto, driven by his own guilt and grief, absconds with Sawako and the two, tied together by red rope, perform a pilgrimage to places they have been and relive memories. Following this is the tale of an aging yakuza boss named Hiro (Tatsuya Mihashi). He spends his days living in fear of assassination. With little to do other than rehash old memories he looks back to a time before he became a successful gangster and remembers a girl named Ryoko (Chieko Matsubara) who would meet him at a specific bench in the same park every lunch time and bring him a bento to share with her. Feeling guilt over discarding her Hiro attempts to reconnect with his old flame. Next, an obsessed fan, Nukui (Tsutomu Takeshige), adores the pop singer Haruna (Kyoko Fukada). When she is disfigured in a car accident he expresses his love for her in a highly violent manner in order to meet her. All three couples experience love so intense it drives them to act in extraordinarily selfish and self-destructive ways.

For those familiar with Kitano’s gangster films Dolls may seem like a departure but he has previously made films about everyday life and always brought elements of Japanese theatre and his stand-up comic routines into his films. Theatricality plays a heavy part here.

Dolls opens with a performance of a Chikamatsu’s 1711 play The Courier for Hell and its story of the courtesan Umegawa and her lover Chubei. Their tragic tale is told by puppeteers and a singer who charts their fall from happiness. The same dolls transcend their theatre origins to look on over the humans in the film as their mortal counterparts perform their own tragic love stories. 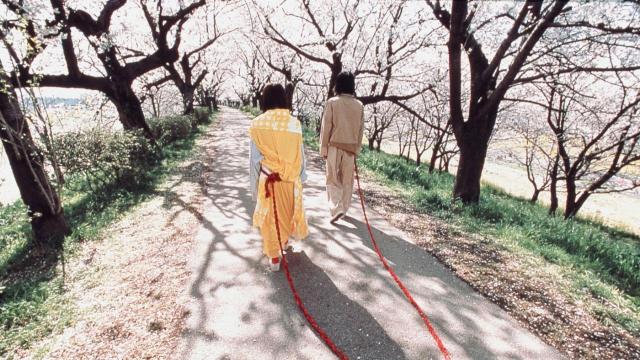 The stories and characters are archetypal and universal. The plots of each story are predictable and drenched in fatalism drawn from the familiar selfishness of human beings. The characters become doll-like with their limited movements, facial expressions (especially Hidetoshi Nishijima) and ostentatious costumes by fashion designer Yohji Yamamoto. Some may find it hard to be interested in the unsurprising elements and stylistic acting choices but what makes the film more palatable is the fact that each story is intercut together and characters intrude in each other’s narratives and when brought together they work exceedingly. It all hinges on an audience accepting the theatricality and getting absorbed in the slow bounce back and forth between tales and there are emotional spikes as the narrative strands reach their dramatic conclusions and the visuals facilitate this. Japanese audiences and those familiar with Japanese culture will recognise all sorts of elements from the meaning of the red rope that binds Matsumoto and Sawako to the manzai act and in this the film is dense with meaning and engaging.

The stories are woven together over the course of four seasons and the Japanese landscape. Characters walk along railway lines stretching through dense forests of deep greens. They sit on beaches where the water stretches off, a heartless steel blue. They cross footbridges with red leaves scattering around them. They wear red kimonos in snowbound lanscapes. Takeshi Kitano’s regular cinematographer Katsumi Yanagishima comes away a hero as he captures four different seasons in Japan so there is the delicate pink of cherry blossoms in spring, the deep red of autumn leaves in the autumn and the bleak white of winter snow. The costumes, all primary colours, make a stunning impact which will inspire and engage all but the most cynical audience members.

Dolls is a beautifully composed paean to love told by meshing traditional Japanese tales with modern cinema technology and Kitano’s eye for aesethics. It is a film with a lot of style and is exquisite to look at especially with the 2K remaster put out by Third Window Films where the colours shine proudly and the cinematography is breathtaking. Each scene could be frozen and the image put into a picture book or hung on a wall. The acting, distancing and awkward, and simple stories, traditional tales repurposed, might be difficult to take for some jaded souls in our modern movie-going audience to take and it will likely test the patience of people but it is a film that should be experienced at least once since it is a film where there is something, at least visually, that will inspire viewers and inspiration is what cinema is great at making.

Behind the Scenes, Video from the film’s premiere at the Venice Film Festival;