Third Window Films are releasing a series of films by Takeshi Kitano on Blu-ray as Office Kitano updates the titles with 2K masters. Regular readers will know that I have reviewed Hana-bi and Kikujiro and next Monday I hope to review the latest film to get a release in the series, Dolls.

I was in high school when this was released and I must admit to being turned off by the obvious artiness of it, which isn’t to say that it’s bad so much as my taste ran more to his more violent gangster films. When I was in university I came to love his more sedate films like A Scene at the Sea and Kids Return. Like those two films, Dolls doesn’t feature Kitano acting on screen and it features a score by Joe Hisaishi (his last collaboration with Kitano). I suppose now is a great time to see how far my views have changed since it’s getting a release on March 14th!

Here’s some info from a press release! 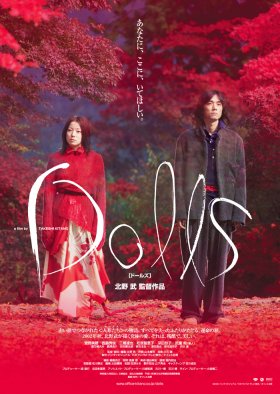 Synopsis:  Three romantic tales are told using elements of Japanese Bunraku puppet theater and beautiful visuals. The first story is about Sawako (Miho Kanno), a woman who becomes suicidal when her fiancé Matsumoto (Hidetoshi Nishijima), leaves her to marry his boss’s daughter. The second story follows an obsessed fan Nukui (Tsutomu Takeshige) of a pop idol who expresses his love for the singer Haruna (Kyoko Fukada) through violence. The final story is about aging gangster Hiro (Tatsuya Mihashi) who attempts to reconnect with an old flame (Chieko Matsubara). The stories are intercut together but all involve love and death…

Behind the Scenes, Video from the film’s premiere at the Venice Film Festival;