Fires on the Plain

War is hell, as the saying goes, and no more so is that better demonstrated than in Fires on the Plain, a harrowing and horrifying story about a Japanese soldier’s efforts to survive the fall of the Philippines in the final days of the Second World War. From the first scene to the last it serves up a series of hellish vignettes of one man’s struggle against increasingly desperate odds, his plight made visceral and powerful by the director’s passion and experience.

The film Fires on the Plain takes place during the closing stages of the war. The Americans are invading Leyte Island in the Philippines and are hot on the heels of demoralised soldiers of the Japanese army, all of whom are looking to evacuate from the island. We see their increasingly desperate struggle from the perspective of an army conscript named Tamura (Shinya Tsukamoto) who is sick with tuberculosis. 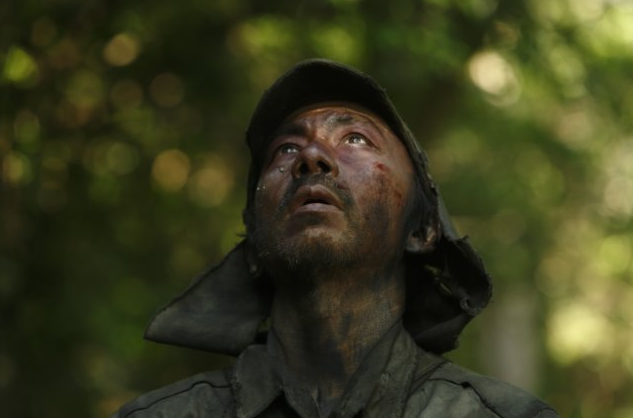 He is forced into the field with a grenade by a commander who cannot waste resources on keeping a dying man alive and suggests Tamura blows himself up. Tamura doesn’t want to give up so easily and clings to life. He wanders around the jungle and bounces between broken platoons and brutal battles as everybody heads to the port at Palompon to be evacuated to Cebu but it is a journey that will lead him down a dark path where he will have to hold on to his humanity as he encounters betrayal, extreme violence, and worse…

The film is based on a semi-autobiographical novel by Shohei Ooka and Kon Ichikawa’s seminal 1959 war film and for director Shinya Tsukamoto it has been a passion project he has spent ten years bringing to life. Tsukamoto may be a legendary director and a favourite on the film festival circuit known because of his hyper-violent horror films like Tetsuo: The Iron Man (1989) and dark dramas like Vital (2003) but making an anti-war film where Japanese soldiers are portrayed as monstrous and weak is a controversial thing and so getting financiers was a tough task. With the money-men backing away from the disturbing subject-matter contained in the story, the lack of money can be seen in the way that Tsukamoto has filmed everything: shot with a digital camera, lots of close-ups of weary faces, battles off-screen, props and sets scavenged from everyday objects and locations and used judiciously. Tsukamoto utilised a small cast and crew and even took up multiple roles on the production including producing, directing, writing, and taking the lead role of Tamura. Despite the lack of resources Tsukamoto has created a truly powerful anti-war film.

Shot on location in the Philippines the film has a distinct beauty. Tamura’s endless trudging through the verdant forest reveals what looks like an untrammelled paradise, an almost impenetrable mass of vegetation made up of trees the darkest of greens and flowers of purple and pink. This beautiful location is the canvas for a film that shows the horror of war as Tamura’s ramblings lead him to discover that the humans crawling around the interior of the forests, little more than emaciated dirty little figures, corrupt everything with death and destruction and madness. 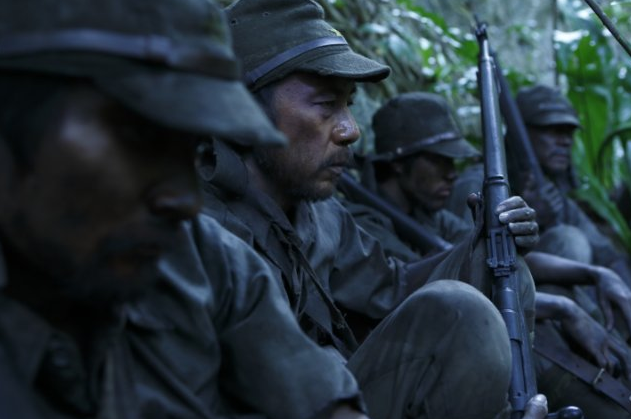 This is not the mighty army full of heroes following brave charges led by sword-wielding officers secure honour and glory. Propaganda has no place in this anti-war film. This is a mass of chaos and ugliness where a war gone wrong has reduced men to their worst selves. Officers brutally beat their men to keep order, scavengers like wily old con-man Yasuda (Lily Franky channeling his manic mirth to create a menacing sociopath) take advantage of terrified child-like younger soldiers like Nagamatsu (Yusaku Mori) who crack under the pressure and turn their rifles on each other. Tamura has to navigate all this and through him we see what has turned men into this rabble.

To survive, Tamura and the increasingly crazed characters he encounters turn on civilians and each other, commit murder and embark upon cannibalism as the film becomes even more bleak. It would be tempting to call this Tsukamoto’s horror sensationalism but the events in this movie are in the book which is based on real life – these soldiers had to survive to get back home somehow. Tsukamoto also interviewed many veterans of the war. If his message is that war is hell then he displays it perfectly here as we see madness consume people.

To show how madness shapes people, Tsukamoto portrays war in all its grisly and miserable detail and goes further in his effort to make an anti-war film and dives into the realm of the hyper-real with his style. When we first see the men they are more or less routed by the Americans and running out of supplies. Their uniforms in tatters, smeared in dirt and blood of battle, the privations of

mis-managed resources results in men who are more or less a straggling parade of fly-covered skeletons who are half-delusional, half-starved, and half-heartedly trying to get to safety whilst navigating constant American attack. The attacks come out of nowhere and are genuinely scary, the sudden thunderous crack of bullets zipping through the forest from unseen machine gun positions startled soldiers and audience members, off-screen aircraft menace soldiers who look up in terror (while the audience girds itself for more visual horror) before dropping bombs. Tsukamoto uses his experience making gory movies by splashing a lot of blood around, some of it ending up on the lens, and many limbs are thrown about.

In one stand-out scene a crazed crush of Japanese soldiers crawling towards what they perceive to be safety get caught up in a machine gun attack which we see executed in sickening slow motion as arms and faces are torn off. It is a horrifying spectacle that uses gratuitous violence to get audiences sitting bolt upright in their seats and feeling ill as it rams home the terror and pain of the violence. Eventually some of the soldiers just give up from despair or craziness and it feels like Tamaura is trudging through the halls of hell as the dead lay scattered around him in the landscape, the dying and the crazy calling out to each other creating a cacophony of misery.

There is a thread of humanity to carry the audience through this suffering and that is Tamura as our lead character. He is a survivor and our guide through this hellish experience in the green inferno which is the jungle of Leyte but it is less through army-instilled skills and more through dumb-luck and dogged determination which humanises him. Before the war Tamura was a writer and married and it is visions of his wife and a desire to retain his decency and humanity that carries him through encounters with death and disorder. Every scene and detail reveals the sham of military escapades orchestrated and led by unfeeling and callous men, reveals the horror of privations and violence, reveals the damage it can do to the human soul. Tamura and others may survive the war but they are clearly broken and you have to ask if any of the horror you saw was worth the loss of life and the damage done.

If there are any drawbacks then it might be that the relentless violence may put people off. While I did spend some scenes wondering what effect a bigger budget might have had such as allowing Tsukamoto to record events on film rather than digitally so he could get a picture with a fulsome quality but the film is still stunning at times and the digital effect useful. There are great wide-angle shots of Tamura stumbling across a ridge, the endless blue of the sky turning into a burning orange as the sun sets or even more menacing colours as Tamura undergoes starvation-induced delusions, an example of limitations providing inspiration.

As far as anti-war films go, despite the limited budget, it is a visual tour de force thanks to Tsukamoto’s imagination bringing to life the scary sequences of the lead character’s nightmarish disease-fuelled experiences as a rogue Japanese soldier trying to survive World War II as everything falls apart around him. Just by having a political message it differentiates itself from every other film released in the year and for it to be anti-war is important when Japan seems to be sliding into increased militarism, however justified by threats from other countries – it gets us to think.

I met Shinya Tsukamoto before the movie was screened and he was remarkably laid back. I didn’t get the chance to interview him but I did get my picture taken with him and an autograph which lies safely in a DVD case… I have reviewed a lot of his films and you can see which ones be looking at my profile of the director.