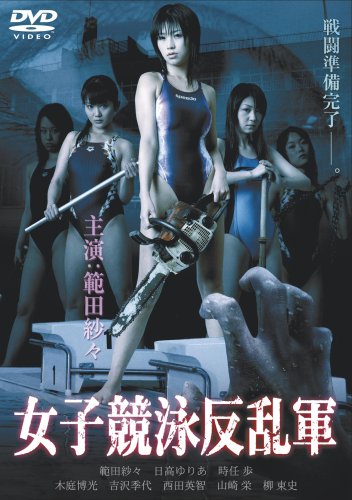 The story, or at least this film’s attempt at one, surrounds Aki (Sasa Handa), a new and mysterious student in an all-girls school. She is ostracised for being a loner who refuses to talk about her past. Meanwhile, the members of the school’s swim team are training hard for a competition and one member, Sayaka (Yuria Hidaka), wants to bring Aki into the competition to replace a member who has gone down with a virus but things go awry when students getting their vaccinations from a weird doctor turn into zombies. Fortunately Aki, the girl with the mysterious past, was once trained as an assassin by a mad scientist!

Not only that, she has help from the swim team who aren’t zombies because, as fate would have it, all of their time practicing in the pool has seen them soaked in chlorine which beats the zombification process. Now all Aki and the scantily clad swim team have to do is fight their way out of zombie school…

I think a lot of viewers go into this expecting more of a trashy fun horror movie as I did but the boundaries between pink film action and genre pictures is blurred quite frequently in Japan. I should have done my research a little better.

Many of these no-budget films were made during the early 2000s and famous names like Sola Aoi and Yuma Asami crop up frequently as AV stars were hired to take part in genre films that feature plenty of T&A as well as action – Big Tits Zombie (2012) is a good example. For my part I was left disappointed since I don’t particularly like pink films. Indeed, I prefer my horror films straight and intellectual but I am not easily offended and I watched it all the way through and I can report it was as shlocky and dumb as the title sounds with few redeeming qualities unless you are here for the nudity.

This is essentially a no-budget pink film set solely in a school and shot on a digital video camera with the first half full of cheap zombie action and the latter half full of breasts. There is no horror atmosphere because of the largely unambitious nature of the visuals and the design/special effects.

The make-up and prosthetics are poor and consist of extras being painted various shades of green and then being let loose to shamble around the school half-heartedly. The blood and prosthetics are a little more ambitious and are splashed and thrown around but not in as much quantities to be as absurd and fun as in other splatter films I have watched. There are two memorable zombies in the entire of the film, one being a teacher who decapitates his students with rulers and who then starts breathing fire when Aki goes into zombie killing mode. The other memorable zombie is a teacher, Ms. Mariko (Ayumu Tokito), who seduces and tortures her victims while speaking awkward English and she sure loves rubbing entrails across her breasts. That’s as interesting as the zombies get and the royal rumble between the swim team and zombies as promised in the title and on the DVD cover is a let down as Mariko quickly cuts a swathe through the girls clad in their swimwear. 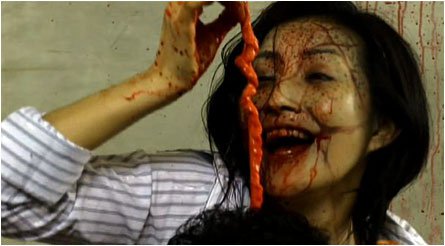 The direction shows little more invention but it is solid and shows awareness in how films in the horror genre are filmed with scenes competently staged and the film flowing easily even if the actors on screen and the action fail to ignite into anything exciting. The script is functional and mostly works through clichés and illogical leaps and twists that serve to hasten the display of nudity which is the main focus.

Each scene with the girls’ features the camera carefully positioned to catch the swim team snapping swimsuits into position around their shapely behinds and, if they are in uniform, the shot composition and actor’s positioning is ably set up for up-skirt shots. There are shower scenes which show all of the goods, so to speak, and there are the lesbian scenes which the film stops entirely for. All of it is passionless and the actors go through the motions. It’s a sleazy pink film that tries to hit all sorts of fetishes, not just lesbians but kidnap and worse. You have been warned.

The acting is abysmal. The cast is either willing to camp up their performances so they shoot off the planet of good taste or they are so dull that they float listlessly into the black hole of forgetabiliy. The lead actor Handa is especially wooden but she is packing large breasts which is what is required of her and Handa’s willingness to go nude and moan and whimper as others manipulate her is exploited to the fullest even if she looks bored while doing it. Yuria Hidaka and Ayumu Tokito, the actors playing Sayaka and Mariko, also display their assets but reveal more than just breasts. It is not quite great acting ability, more enthusiasm. Much like Sola Aoi in Big Tits Dragon, they carry this film by being a bit more fun. The others are hyper-actively over the top or just plain dull. 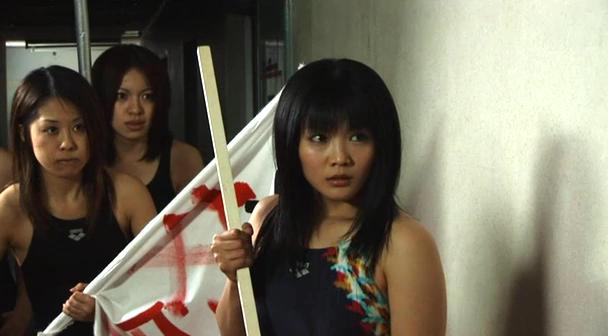 There is nothing wrong with pink films per se but this is is garbage even by the low standards of budget horror. The flaccid fights and limp pace, the uninspired effects, and the dull atmosphere and passionless performances in this film shows the class of the boys and girls of Sushi Typhoon, low-budget horror film heroes who put heart and soul into the films they make. If you want a pink film, there’s plenty of nudity from the gorgeous girls here. If you want a horror film, steer clear.