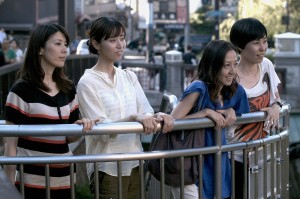 Well, I am back from my short trip to London and the BFI London Film Festival where I met a friend and did some touristy things. I only watched one film this year and it was Happy Hour, a five hour drama about four women in Kobe and the shockwaves from a divorce that jolt the friends from their dull relationships. I must admit that there were times during the film when I wished I were watching Yakuza Apocalypse or Ryuzo and His Seven Henchmen but Happy Hour proved to be a worthwhile watch.

Only one review this week and it was for Helldriver (2010).

I can’t remember too much from the original Little Witch Acadameia other than it was a bit of goofy fun. This is the sequel and it was partially funded via Kickstarter.

Synopsis from Anime News Network: Student witches Akko, Sucy and Lotte are tasked with organizing a parade commemorating the role of witches for the annual town festival. Sleeping giants, ambitious mayors, insolent boys, the girls’ own squabbling and copious amounts of magic combine to create a spectacular event.

Synopsis from Anime News Network: Atsuo Saitō’s original 1972 novel is set in Yumemigajima, an island ruled by a fierce white weasel named Noroi. The town mouse Gamba and his friends fight to save the island’s mice.

The Laws of the Universe Part 0 (UFO Gakuen no Himitsu)

Ryuho Okawa, the founder of the controversial religious organization Happy Science (Kōfuku no Kagaku), is credited with the original work and as the chief production supervisor for the film. Isamu Imakake (The Mystical Laws, The Laws of Eternity) is directing the film, and also serving as chief animation director and character designer at HS Pictures Studio (formerly SH Studio).

Synopsis from the film’s website: Ray, Anna, Tyler, Halle, and Eisuke are five high school students who are suddenly wrapped up in a mysterious incident.

An alien species called Grey abducts Halle’s sister and embeds her with a special chip inside her brain. The five stand up to save Halle’s sister and try to reveal the existence of aliens, but continue to be met with mysterious events.

The high school students’ story progresses into a shocking development!

What truths hide on the dark side of the moon? What are the true intentions of the aliens that are infiltrating America, Russia and China? What is the true crisis that is closing in on Earth and what hope can we have towards the future!? Going beyond the last movie, The Mystical Laws, The Laws of the Universe – Part 0 reveals stunning truth from beyond the star in animation form!

People of Earth, you cannot afford to miss this movie!

The popular television show Sakana-kun is on the big screen for the second time this year and the theme for this one is jump, hide, the world’s largest. Easy to understand commentary ensures that kids find out more about the world’s largest whale shark herds, the ancient fish arowana of the Amazon river who eat insects by jumping out of the water, and the sea anemone that hide, such as clownfish to protect themselves from predators.

This is the director’s cut of a film that was originally released in May. It adds over 20 minutes of content!

The project began with a seven-part series, which is composed of the “episode 0” and 12 full episodes helmed by chief director Mamoru Oshii and other directors. Each full episode is about 48 minutes long. The final feature length film ran at 94 minutes with the director’s cut clocking in at 119 minutes.

Synopsis: The story is set in Tokyo in 2013, and it represents the “third generation” of Patlabor. The Tokyo Metropolitan Police has disbanded its Section 2 Division 1 of police robots, and Section 2 Division 2 barely survived the budget cuts due to the long recession. The film will centre on the Section 2 team fighting against a terrorist group that has taken all of the 10 million residents of Tokyo hostage.

Synopsis from the film’s English language website: NUCLEAR JAPAN is a documentary film directed by a 70-year-old lawyer with remarkable record of winning very high-profile cases who elucidates the controversial issue of nuclear power industry in Japan.

On March 11th, 2011, a massive earthquake hit East Japan, which caused a catastrophic accident in Tokyo Electric Fukushima No.1 nuclear power plant. Radioactive materials were released from its four nuclear reactors, and they have contaminated the people’s land as well as ocean. Today, the effort to clean up the radioactive materials is still ongoing, only too little effect.

There was one lawyer who had been actively voicing the absurdity and danger of Japanese nuclear power – Hiroyuki Kawai. Kawai has been fighting in many legal battles to halt nuclear power plants in Japan for over 20 years. Ever since the crisis at Fukushima No.1 power plant, his fight has been fuelled by even more drive and dedication.

Then, Kawai had a thought. What if he makes a movie about this issue? If he wants the public to understand the complicated issues of nuclear power, literature has its limits. Also, all the coverage by Japanese media has been biased. Only by providing the visual and giving the objective view, he can communicate the true absurdity and inhumanity of the nuclear power in Japan.

With the help of another lawyer Yuichi Kaido, Kawai’s old ally who also has been fighting in nuclear power plant lawsuits, Kawai completed this documentary film, NUCLEAR JAPAN.

The film not only features the interviews of many experts, a number of facts and evidences, but it also brings to light the immense pain of the people have been suffering from the nuclear crisis. NUCLEAR JAPAN is now being presented as evidence in many lawsuits to halt nuclear power plants all over Japan.

Synopsis: Kyoichi (Ogata) is a widower. He used to be happily married and a school principal but after the death of his wife and his retirement he keeps to himself. When his wife was alive she liked to feed a stray cat named Mii and since she has died Mii still visits, paying particular attention to his wife’s funeral picture on the Buddhist altar. This irritates Kyoichi who shoos the cat away each and every day. When Mii stops showing up at Kyoichi’s house he begins to worry and searches for the cat. He isn’t the only one. Kyoichi discovers that other people in the area are also looking for Mii.

So, Library Wars got a sequel. Here’s what I wrote for the first film:

“To be honest I have never taken the concept seriously but viewing the trailer has left me interested if only to see Chiaki Kuriyama on the big screen again.”

I’ll be honest and say that I found the first Library Wars movie deathly dull. For all the sound and fury of the gun battles, the drama was absent thanks to some rote characterisation, bland acting (especially from Fukushi and even Kuriyama), and a setting which doesn’t make a whole lot of sense and irritated the heck out of me while I was watching it. I don’t know why it got a sequel except it’s based on a popular franchise and gives screen time to idol actors. Maybe I’m missing something…

Synopsis: In the near future an authoritarian government runs Japan. It has passed a law banning free expression and so the government has created an armed force to find and destroy anything it deems as objectionable content like books. Enter the Library Force which aims to protect books. Can Atsushi Dojo (Okada) and Kasahara (Eikura) defend their beloved books?

Decline of an Assassin

Director Shoji Kubota and actor Yoshimasa Kondo have worked together more than once. This year saw Murder on D Street released at the start and now it is ending with this film which screened at the Montreal Film Festival (that festival had a great line-up of films).

Synopsis from the Montreal Film Festival: After serving 40 years as the hitman for a shadowy criminal gang, Muneyuki Kurosawa has recruited and trained two young men in his deadly art. They are both straining at the leash, eager to fill his shoes. Indeed, though Kurosawa’s mastery was once unmatched, he’s now beginning to make mistakes. As well, he’s beginning to fall in love with Miori. his favourite bargirl, even to feel protective of her. When a simple hit gets botched, Kurosawa realizes it’s time to call it quits. But after decades in violent crime, how can he ever get back to normal life?