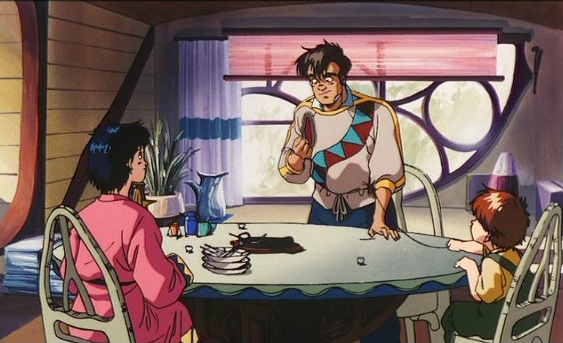 After a movie drought lasting nearly a month (I think the last film I watched was Kiki’s Delivery Service in the middle of August) I spent last weekend gorging myself on films. On Friday I attended the Raindance film festival with two friends and watched Slum-polis (2015) and Fires on the Plain (2014). I also met the director Shinya Tsukamoto and had a picture taken with him. Then on Saturday I went to the Kotatsu Japanese Animation Festival with a friend and watched A Letter to Momo (2012), Short Peace (2014), and one of my most favourite anime of all time, Royal Space Force: The Wings of Honneamise (1987). On Sunday I went and watched Kazoku Game (198). It was an incredible series of films so expect reviews.

Only one post this week and that’s for Mutant Girls Squad.

The Empire of Corpses

Empire of Corpses is the first of three films from Project Itoh, a concerted effort to adapt novels by late author Project Itoh who died in 2009. The three novels are being turned into films by different directors and studios. The Empire of Corpses comes to us courtesy of WIT Studio (Attack on Titan, Hoozuki no Reitetsu) and is directed by Ryuotarou Makihara (Hal).

Brilliant medical student John Watson is invited to join the UK government’s secret society, the Walsingham Institution. There he is given a clandestine mission: search for the legendary writings of Dr. Victor Frankenstein, left behind a century ago. These private papers allegedly detail the technology behind a more sophisticated reanimated corpse – the original – that could speak and even had free will.

The first clue leads Watson deep into Afghanistan. Alexei Karamazov, a military chaplain and genius corpse engineer for the Russian Empire, was seen leading an army of an unknown type of armed corpse there. He used them to instigate a rebellion before going underground, leading Watson to suspect he may know the whereabouts of Victor’s private papers.

Accompanied by Friday, a corpse that records all his activities, Watson begins the journey of a lifetime in search of Victor’s private papers.

The Arpeggio of Blue Steel franchise has two films released in 2015. The first was a compilation of the TV anime and was released at the end of January while this one features brand new content.

Synopsis: In Arpeggio of Blue Steel, humanity has lost a large quantity of its developed land as a result of global warming. They then lose the seas when a “Fleet of Fog” appears all over the world and overwhelms humanity. Seventeen years later, Gunzo Chihaya and his crewmates find themselves comandeering a “Fleet of Fog” submarine called I-401 and together with Iona, the submarine’s “mental model” (human representation of the submarine), they take the fight back to the Fleet of Fog.

Bakuman comes from Tsugumi Ohba and Takeshi Obata, the creators of Death Note. It is very popular and has been collected in over compiled volumes of manga and has been the basis of three television series produced by J.C. Staff since it was first published in Weekly Shounen Jump back in August, 2008. It has a star-laden cast and a director who has worked on indies and bigger budgeted films. All in all it looks like a decent adaptation from the early signs.

Synopsis: Moritaka Mashiro (Satoh) is a talented artist but after the death of his uncle, a manga-ka who died because of exhaustion, he resents art and wants to become an office worker. Then he meets and falls in love with a girl at school named Azuki Miho, an aspiring voice actress. Azuki tells Moritaka they can marry, but only after they both achieve their dreams. Moritaka then teams up with fellow classmate Akito Takagi (Kamiki), a talented writer, and they aim to publish their first manga.

Synopsis: Shigeo Katsuura (Endo) was once the leader of the yakuza in Kiya but after losing his arms and legs he is forced to go around to his debtors’ homes to collect on debts and make money. He does this with the aid of his loyal henchman Kenta (Miura).

Synopsis: Ando’s (Uchino) daughter Kana supposedly committed suicide by jumping from a high ledge but he isn’t so sure. Ando starts an investigation and all signs point to foul play with his daughter’s former classmate, Saki (Yoshimoto) looking like a suspect. Behind her sweet façade it seems she is an ambitious girl who rules the school’s social scene. Can Ando find the truth?

Synopsis: Kenichi (Sano) is a guy on his university’s cycling team who falls for an emotionally unstable woman (Nakajima) and gets to know his team’s captain and a woman who works at a cabaret. Despite their problems, the four find themselves growing together.

Synopsis: Suginami ward, Tokyo, a garden is the scene of a movie which looks at how children experience growth through nature, through insects and frogs and plants and all the wonderful things that nature (and adults) can come up with for them.

Journey to the Shore

I have written about this a few times as it travels the festival circuit this year so here’s the entry for the Toronto International Film Festival:

Kiyoshi Kurosawa is one of the best film directors working in Japan right now and while he may never make a horror film like Pulse or Cure again, he has settled into making dramas pretty well.

This one is an adaptation of the 2010 novel Kishibe no Tabi by Kazumi Yumoto and while critical reaction to it indicates that it is no Tokyo Sonata it has at least earned him the Best Director prize at the 2014 Cannes Film Festival. The film is an elegiac drama and has earned a reputation that suggests an audience might come away feeling this is profound or dull. I await the moment I finish watching the film before I make judgement but it has a great cast such as lead actor Tadanobu Asano, star of Vital, Ichi the Killer, and Gohatto and Watashi no Otoko. Eri Fukatsu is the leading lady who put in a star turn in the crime drama Villain.

Synopsis: Mizuki’s (Fukatsu) husband Yusuke (Asano) disappeared three years ago. Then one day, he comes back and asks Mizuki to go on a journey with him visiting all of the places he went to and all of the people he met while he was travelling. Mizuki begins to understand why Yusuke went on his journey.