Director Yosuke Fujita has taken nearly a decade to follow up his debut film, the marvellous low-key comedy Fine, Totally Fine (2008), with another feature film. In the time between the two he has been making short films (including the Cheer Girls entry in Quirky Guys & Gals) and a TV movie. Fujita also spent this time crafting the screenplay for Fuku-chan which, like his first film, is equally filled with eccentric and loveable characters’. Fujita’s inspiration for the film was the comedian Miyuki Oshima, a regular face on Japanese television, and he challenges her to take on the role of a guy with a fear of women who audiences will surely come to love.

Tatsuo Fukuda (Oshima) is a nice guy and has the nickname ‘Fuku-Chan’.

Fuku-chan works as a painter/labourer and lives in “FukuFuku Flats”, a run-down apartment complex where time has stopped. He has created a comfortable home full of boyish knick-knacks and his manga sketches. In his spare time he paints kites as a hobby and flies them. Precisely because he is a nice fellow he is popular with people he meets and he collects a lot of characters around him, especially lonely guys who he befriends and sometimes he helps resolve arguments between his friends, co-workers, and neighbours in FukuFuku Flats. Despite his good-nature and popularity he finds it hard to socialise with women and despite his friend Shimacchi (Arakawa) trying to set him up with dates. Fuku-chan refuses all attempts. In fact, it seems that Fuku-chan fears women. This is down to the fact he suffered a cruel prank in junior high school.

One day, one of the perpetrators of the prank visits him.

Chiho (Mizukawa) has quit her job with a foreign investment firm to become a photographer but the man who inspired her, her idol, turned out to be more interested in her looks than her photography. Suffering a crisis of her own, she has tracked down Fuku-chan to apologise but as far as Fuku-chan is concerned she was the girl who broke his heart. Nevertheless, Chiho apologises to him and his smile inspires her to take up photography again and her reappearance signals to Fuku-chan his life may change…

Fuku-chan of FukuFuku Flats is a warm and light-hearted film but it is also very dark. Despite the sunny atmosphere and quirky comedy, delve deep into the characters’ and you will find psychological scars.

Much like his first film Fine, Totally Fine Fujita has populated his film with people on every part of the “quietly crazy” spectrum from some of Fuku-chan’s clearly loopy neighbours to the more relatable eccentrics, loners, and normal types you might meet in everyday life.

None but the most outrageous are made fun of, the film is pretty sympathetic even in its comedy which is told in a dry and quiet way.

The film slowly spins out its story of strange people orbiting Fuku-chan allowing the observant audience to spend time with them and watch quirks and, from some, a degree of tragedy, come out. At the wilder end of the spectrum there is a crazy curry restaurateur

(played brilliantly by Kanji Furutachi) who refuses to serve water with his food believing that pain sends people to some sort of nirvana and then there is a lecherous photographer. These are two characters whose sequences will leave an audience breathless with laughter but for the most part the characters bring understated comedy and some pathos. On the darker and more realistic end is a character driven to buying an exotic pet to “shock” his loneliness away who cries at every simple gesture of friendship that Fuku-chan offers while another is a paranoid and delusional man who is a danger to himself and others.

Despite having the biggest heart and smile in the film, Fuku-chan is arguably the most damaged character of all as he carries scars from his awful date with Chiho as a teen. He fears women and he has chosen to live a somewhat sad solitary life.

The signs are there for the audience to pick up on as Shimacchi’s girlfriend reveals that Fuku-chan couldn’t look her in her eye when they first met, Fuku-chan plays ball games with male friends when he should be on a date, and Fuku-chan has childish hobbies. He has a childish and old-fashioned taste in clothes (costumiers to the rescue! Fujita loves making his characters wear woolly jumpers) that accentuate his lack of awareness of style, and detailed set design which allows us to see his apartment is a treasure trove of childish toys, drawings, and stuffed with kites he constantly makes. From this we recognise that Fuku-chan is clearly suffering from arrested development, much like the protags in Fine, Totally Fine. It is understandable why Fuku-chan refuses to grow and meet women since the disastrous date with Chiho ends with a horrendous and humiliating sting in its tale. Told in a flashback with discordant disturbing music we see how bullies made his life a misery and Chiho made him the woman-fearing man-child we have come to care for.

The genius of Fujita’s work is that audiences will be able to identify Fuku-chan’s inner pain and it will strike a chord since it is based on something everybody feels – being uncomfortable about physical appearance. The story soon becomes one about looking past the surface and seeing the real person beneath which is where Chiho’s photography neatly comes in. Thankfully Yosuke Fujita ensures that Fuku-chan of Fukufuku Flats has a warm-hearted approach that allows us to sympathise with the characters as he shows that the bonds of friendship and love can bring out the good in all of us.

From the tragic background we get a series of uplifting and hilarious as Fuku-chan and Chiho embark upon a photographic odyssey of his everyday life and the film champions Fuku-chan’s uniqueness and shows how much of a great guy he is. Subtle and low-key comedy from the myriad of strange situations and characters that happen to Fuku-chan and Chiho form the majority of the comedic moments and it culminates in a magnificent sequence with a giant kite. As wild as the film may get with CGI touches and some situations such as a chase and a giant kite, the tone and atmosphere never break and it remains heart-warming, essential to the tone of the film after some of the darkness the audience will have witnessed. Ultimately the film is full of care for the characters, and full of great acting. 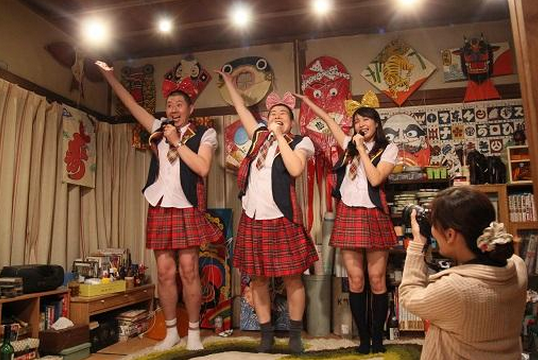 I think that casting Miyuki Oshima was a great move in making the audience care about the titular character. Head shaved, and a little bulking up, she passes herself off as a guy with ease but it is a type of guy not often seen on screen – an easy-going and caring one – and she is a joy to watch. As well as looking boyish she has a soft and gentle quality that to my mind, softens a lot of the harshness of her character’s emotional reactions to being made fun of. A male actor might have been too blunt or indulgent in his character’s misery (see Mirai Moriyama in Moteki). Oshima remains positive, though a little guarded. When she opens up to love again it is enjoyable to experience. I was not the only one to think this because she has won awards for her performance including Best Actress at the 2014 Fantasia Film Festival.

Her co-stars are all uniformly good with Asami Mizukawa moving comfortably from low-budget horror (Bilocation, Higanjima, The Locker) to this rom-com. Mizukawa makes a great partnership with Kami Hiraiwa (Welcome to the Quiet Room, Otaku’s in Love, Happy Flight) who plays a horror author and then there is Kanji Furutachi as the crazy curry idiot but the real delight is seeing Miyuki Oshima interact with YosiYosi Arakawa who was one of the leads in Fine, Totally Fine as well as the very funny in the 2014 comedy Judge!. 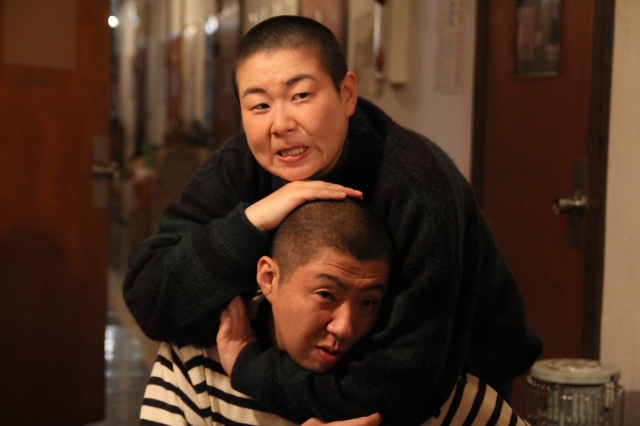 I have seen the film three times since its screening Raindance last year and it doesn’t lose its magic. The darkness and Fuku-chan’s hurt is still affecting and the human drama and gentle comedy that lightens things and brings the story through its more poignant moments is still a joy to watch. Fujita crafts characters and friendships/relationships with great respect for his creations and by putting them through trials and getting them to overcome their darkest and most negative feelings without it being too overblown or fake the film is a satisfying story. Fuku-chan of Fukufuku Flats is another cracked comedy that charms the audience with its excellent characterisation and low-key comedy. You will get to know and love these characters, especially Fuku-chan, and you will relate to them. It is an absolute joy to watch and I highly recommend it.