I am a Hero アイアムアヒーロー

Launched in 2009, 16 volumes and currently ongoing.

I am jaded when it comes to zombies.

Zombies are everywhere in the West. They dash along cinema screens in horror movies like World War Z and they shamble across small screens in video games like Resident Evil and television series The Walking Dead, anime like Highschool of the Dead, and even reality TV shows like the BBC’s I Survived a Zombie Apocalypse.

I watch them but I am beginning to get weary of it all.

Gone are my teenage years when I first experienced the existential and visceral terror of the horror and bleak social commentary that Night of the Living Dead and Dawn of the Dead carried. Today it’s all a shooting gallery or dramas about snarky teenage zomboys and zomgirls and romance for the iPad generation.

It has been a long time since I was thrilled by zombie apocalypse
scenario. There is one exception. I have been reading Kengo Hanazawa’s manga I am a Hero since 2013 and each volume has proven to be a thrilling and scary read.

The hero of the story is Hideo Suzuki and he isn’t much of a hero. 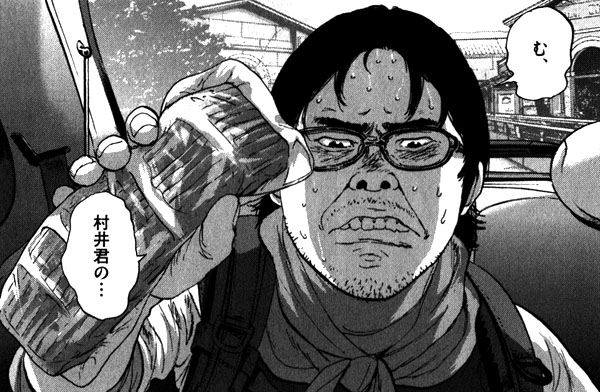 He is a geeky and obsessive out-of-shape guy in his thirties and he is struggling with his everyday life. His day job is as a manga assistant to a more successful and domineering manga-ka. Hideo tries to get his own manga published but is constantly rejected. He does have a girlfriend named Tekko but she reminds Hideo of his lack of success as she thoughtlessly raves about her ex-boyfriend, a more successful artist getting published and making money.

Hideo burns with jealousy and envy of rivals but holds it all in as he floats along in the wake of others. Cracks from the pressure of his life are showing but he resists falling apart by keeping up simple routines and repeatedly telling himself that he is a hero like it is a mantra but it seems he is at the end of his tether and finds it increasingly hard to cope as hope is sucked out of him.

There is tangible evidence. Hideo has strange hallucinations involving monstrous creatures invading his reality. In sequences that seem to come straight from supernatural manga like Fuan no Tane, we see ghoulish things besieging his small apartment or cornering him in parks, and so he obsessively follows daily routines to keep them at bay.

He talks to himself and loses track reality from time to time and hours can float by. His one way of blowing off steam is his rifle, taking it apart and cleaning it, methodically maintaining it, and going to the shooting range and firing a few rounds.

This is our hero. A manga geek with mental issues and a gun.

The first volume threw me because I was expecting zombies but got a detailed character-study of this strange fellow who barely qualified as leading man material even in his own life. It delved into the realm of psychological horror as we see the world from the perspective of a man with severe stress, abysmal self-confidence, and other problems.

It was painful to read and I could relate to it at times. Not the scary visions but the examples and feeling of pressure from urban living, the anxiety of socialising with others and the sense of being a side-character in one’s own life. Ignore the visions and this is a portrait of modern life for many, I suspect.

For most of the first volume no zombies appear. It’s just Hideo and his problems. There are zombies out there slowly making their way from the periphery of Hideo’s narrative, slowly but surely, ready to rock his world. Its details such as a stranger biting someone at random. Weird news reports about a mysterious flu. Most shocking and ominously, a person getting knocked over by a truck on Hideo’s street and walking away with their body-parts at weird angles. 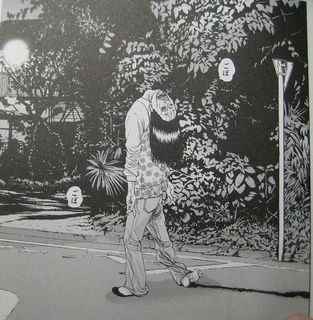 Hideo doesn’t notice this. He carries on hacking away at life and manga.

The artist Kengo Hanazawa has made a great effort to capture everyday life and locations in every frame so we get familiar with these people and places. You can get a good idea of what Japanese urban living is like from the depiction of Hideo’s day-to-day routine – leaving his apartment, travelling by subway, eating out. This accretion of details works well so when old ladies living on Hideo’s street start disappearing, idols aren’t on television anymore, car accidents happen, and there’s talk of a flu virus outbreak on the nightly news they are very, very noticeable and we are aware of the build-up to the inevitable zombie apocalypse even if Hideo is blind. The tension is incredible.

Hanazawa piles on the pressure. Accidents, death, and sickness travel quickly. People close to Hideo become affected. At first co-workers become infected and try to ignore pain, call in sick to work. Friends look like they are suffering from dengue fever after encountering strange violent people, and characters talk about disappearances and then Hideo himself is attacked by people he knows and after all the build-up it is genuinely scary.

These are the fast-moving ‘infected’ type of zombies seen in 28 Days Later. Agile and dexterous, they chase, climb, claw and chomp on people. 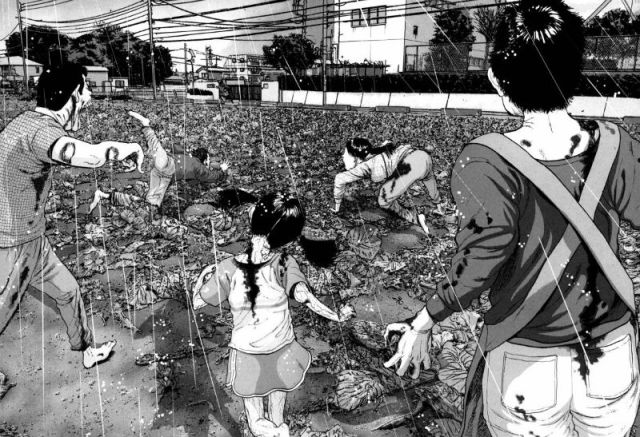 At this point we are familiar with Hideo and we know what sort of man he is, all his problems, his lack of drive and confidence, and it feels like nothing is guaranteed. He is slow to comprehend just what is going on because his awareness of the world is so limited. He is not much of a scrapper and is so out of shape that fights with people physically weaker than himself become ordeals of epic proportions. He makes simple mistakes and walks into danger often because the zombie apocalypse slowly encroaches on everything and he is totally unaware of it.

Then he finally gets his brain into gear and realises he has to get out of the city and what ensues is a thrilling and scary escape mainly using public transport so we see how the city is falling apart. Reading Kengo Hanazawa’s detailed art is like watching a zombie apocalypse unfolding in slow motion.

Look closely at the city streets that Hideo flees through and see civilians confused by the violence. Hanazawa captures fast paced movement with body positions, people at weird angles and limbs splayed out as they are in mid-flight from a pursuing biters or taken down by a horde of zombies, looks of terror etched on faces. People are pressed against windows of their own home as they try to escape loved ones turned dead-heads. Dumb-founded bystanders try to aid others as planes fall out of the sky, cars careen wildly and zombies creep, crawl, leap and loll around, bounce off cars and into crowds of individuals.

The zombies themselves are recognisable, drawn from everyday life. Housewives, salarymen, construction workers, babies (in later volumes of the manga), all who look as if they were going about their routine before turning. 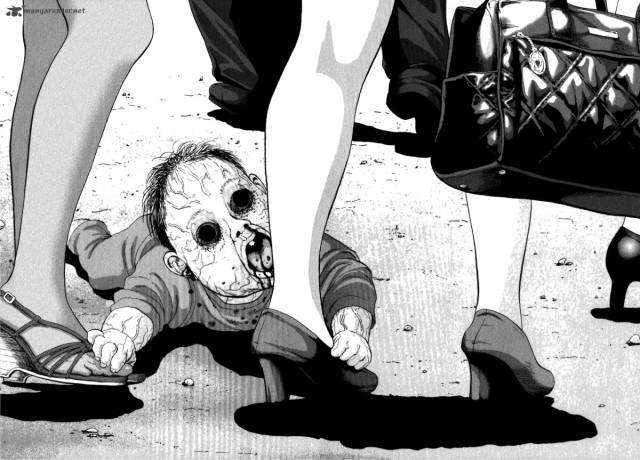 All angles are covered!

The breakdown of society is happening in slow motion, indeed, and there’s so much detail to drink in.

It’s a very Japanese apocalypse because people try not to draw to much attention to themselves or cause a fuss even if a zombie is around, looting doesn’t happen for the longest time, people head for shrines which are rumoured to offer protection and try to maintain their social roles even when everything is going to hell. And then there is Hideo with his rifle. 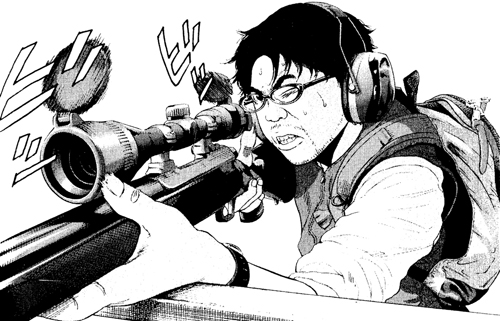 He may be armed but, unlike a Westerner, he isn’t going to go in all guns blazing. He is afraid of breaking the law and so resists using his rifle for long stretches of the narrative. When he does use the weapon he displays a sense of professionalism and very Japanese diligence and gains confidence from following well-honed routines. As Hideo travels from the city and out into the countryside he faces the possibility of starvation and comes across stores that, although left unguarded, have not been plundered. When he takes something he leaves money on the counter and a note explaining what he did and why and with an apology to boot.

As a hero, he grows with every day although he is still plagued by

indecision and cowardice and he still blacks out from time to time (in the middle of forests crawling with zombies) and has visions that remain scary so you are never quite sure what is real. He survives more through luck than anything else but this makes the narrative so exciting to read! Every moment is one fraught with danger which is not something that I feel with a lot of Western zombie material.

As much as I have talked about Hideo, Kengo Hanazawa cleverly allows the narrative to broaden out a lot to take in other characters in other 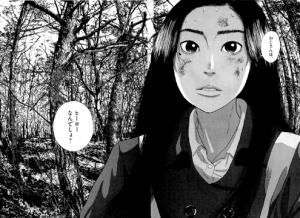 parts of the country, a cross-section of society. Hideo encounters them eventually. There are survivors holed up in houses who have honed their zombie survival skills, a group on the roofs of shopping centres are led by NEETs and hikikomori’s enjoying newfound freedoms in the breakdown of society and displaying the worst traits of human nature. We even get a glimpse of other countries like France and Taiwan. All sorts of individuals are depicted, each with flaws and skills, moments of cowardice and bravery and all with backgrounds and personalities. They appear an add spice to the story: a photographer who has abandoned his family to get shots of the end of the world, a schoolgirl who has become separated from her class on a trip, and a hard drinking, hard talking nurse who gives Hideo a sense of purpose.

sequence in the middle of a zombie attack. There is nudity and CPR, so a “kiss” of sorts between Hideo and a younger character. After a realistic zombie narrative, after Hideo’s musings about how artistically bankrupt modern manga is, after the build-up of a relationship between Hideo and two females in his life and an appropriate adult relationship, this felt cheap and tacky designed to appeal to lolicons and it left a distinctly bad taste in my mouth. It’s only a couple of chapters but it broke my mood but the zombies were soon back in play to scoot the narrative along.

Where it goes in future chapters is anyone’s guess and that’s what is fun. As for the main narrative there are disturbing zombie transformations glimpsed in Paris, and seen by Hideo. There’s talk of a spin-off set in Osaka and there’s a live-action movie due this year. This is one zombie franchise I am happy to return to and would recommend.

This review is part of my Summer of Splatter Films season: