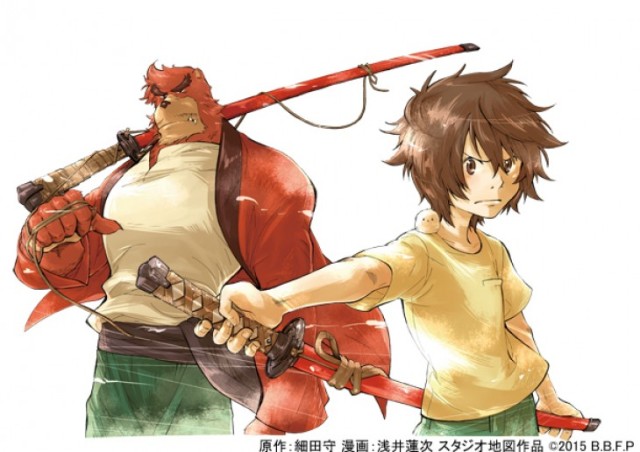 The Boy and the Beast

A lonely boy in Tokyo’s Shibuya ward finds that there is another world, the bakemono realm (“Juutengai”). Typically, the human world and Juutengai do not meet but the boy gets lost in the bakemono world and becomes the disciple of a lonely bakemono named Kumatetsu (Yakusho) who takes the boy under his wing and renames him Kyuuta (Miyazaki/Sometani).

I like the trailer. The animation features bold but simple colours and the designs of the characters are cool, angular and straight, strong and well defined, capturing an essence of what I’m beginning to imagine the characters as. I know this is a trailer but there’s a lot of motion in the animation which looks top-notch, really fluid and colourful with a lot of detail spent on movement. This won’t be static. One thing that assures me of that is Hosoda’s previous films. I recently re-watched The Girl Who Leapt Through Time and, free from having to pay too much attention to the story, I delighted in looking at the way characters moved across the screen. School scenes are vibrant and feature lots of people, all of whom move around and have something to do. Individual things like the way hair moves and people walk around are rich with detailed motion.

Overall, the trailer is fun, big bold, and brash fun. The story is fantasy and reality crashing together, which is par for the course as far as Hosoda is concerned. It remains to be seen how much substance there is in the story but there’s potential for depth considering the story is about loneliness and Hosoda can take the simplest of concepts an imbue an air of tragedy in a single beat. Careful observations of his films reveals motifs and symbolism everywhere.

The voice actors also match the characters and there is an impressive collection of seiyuu gathered for the roles, many being actors who I constantly rave about. Some of them have worked with Hosoda before.

The titular bakemono of the story, Kumatetsu, is voiced by Koji Yakusho, a familiar face from live-action Japanese cinema with roles in comedies and dramas. He is probably most famous in the west for the film Shall We Dance? and the film 13 Assassins. I know him from those as well as a string of horror movies and dramas directed by Kiyoshi Kurosawa like Licence to Live, Cure, Retribution, and Séance.

There’s a great vocal cast supporting the actors with Mamoru Miyano, a veteran seiyuu who voices characters in Tokyo Ghoul and many other anime, Lily Franky, an interesting actor who has appeared in Like Father, Like Son, and Judge!, Yo Oizumi, an actor who takes the lead in many films like Bolt from the Blue and has a few voice acting credits in titles like The Cat Returns and Spirited Away, Haru Kuroki who worked with Hosoda on Wolf Children and took an award for her acting in The Little House at last year’s Berlin International Film Festival.

Miss Hokusai has been confirmed for release and distribution in the UK and I suspect that The Boy and the Beast will follow suit because the subject matter of the film is easy to sell and Mamoru Hosoda is very popular and well-known amongst cinephiles and anime fans thanks to titles like The Wolf Children and The Girl Who Leapt Through Time. The film gets its theatrical release on July 11th in Japan. French movie studio Gaumont will handle international sales outside Asia.

Here are some final images to leave you with:

13 thoughts on “The Boy and the Beast Trailer”