Patema Inverted is a story of boy-meets-girl only the writer/director Yasuhiro Yoshiura makes the phrase “falling head over heels in love” literal by twisting gravity around for the central couple so that they must cling together lest they lose not only each other but their lives… If protagonists getting their gravity mixed up is not a new and novel concept, it is one that is explored with much life and energy here in a deceptively light film where superb animation and imagination creates a world where ever shifting perspectives on life give a slight story much substance.

The girl in the pairing is the titular Patema, a brave princess of an underground village where the inhabitants, descendants of a group of scientists caught up in an experiment gone wrong, live in the tunnels and confined spaces of a scientific facility built long ago.

Patema’s village, the costumes and props are designed to perfection. As Patema explores we see it is a place where the sun has been replaced with the harsh glare of halogen bulbs and the wind comes not from a blue sky but huge black cavernous gulfs that extend nto the earth. The villagers, young and old, wear protective

clothing, spare uniforms from an earlier time, so they look like spacemen. They scavenge for food in old storage facilities that are located amidst the wreckage of the decaying structure, where there are pits, twisted rusting metal and wires hanging down like tendrils of vines. This is the inverse of the natural world. Despite their surroundings, these underground people still enjoy life. They group together in chaotic carousing crowds of fun and are constantly smiling, especially kids and Patema who skips in and out of tunnels with a grin on her face. She loves to explore and discover new places. Her fascination with exploration leads her to a danger zone, which her guardians have forbidden her from visiting because of rumours of humanoid bat creatures. Of course she defies their instructions and visits the danger zone. Her curiosity is cut short when one of the fabled humanoid bats attacks her. In an effort to escape she battles the creature but falls into what seems to be a bottomless pit…

The film cuts to a schoolboy named Age who lays in a huge field near a fence which cordons off a hole in the ground. It is late at night and he is gazing at the stars. He has a melancholy air about him, something more than typical teenage frustration, it is a deep-seated unhappiness about the world he lives in but all of that is put on hold when he sees Patema falling up from what he thought to be a perilous drop into the earth. She clutches onto vegetation and the fence Age was by to prevent herself falling into the sky. He, of course, is surprised, but soon grabs onto this upside-down girl before she can fall away into the sky.

Patema, with her inverted gravity, is terrified being out from underground with the vast sky above… I mean, beneath her. Wouldn’t you be? Next time you’re outside look up into the sky.

Imagine you didn’t have gravity holding you down and you could plunge up into that abyss. Scary, right? The perspective switches between Patema and Age as the story proceeds so everything is a bit upside down throughout the film. It is exhilarating seeing the world from a new perspective but also scary. The film plays on their different gravities brilliantly as it allows the two to develop a tight relationship through their terror. With her different gravity she needs Age to keep her anchored to the ground and, as the film continues Age needs Patema to hold him down or pull him up in perilous situations and so the two cling to each other.

Age is overjoyed at meeting Patema but soon realises that she is in trouble. In his world, those with a different gravity are hunted by the authorities. 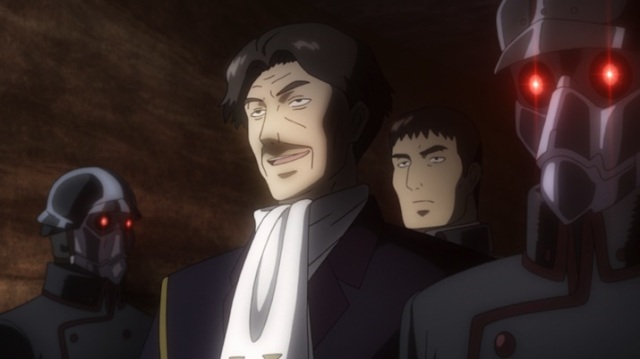 The details of Patema’s surroundings were perfectly captured with a lightness of touch but Age’s society is arguably where the most detail comes into the film and the real darkness begins.

Age’s world is run by a religious and repressive regime. It is an orderly Orwellian society where security forces clad in black uniforms police people through constant

monitoring via security cameras. The citizens of this land shuffle to their designated locations and jobs with little sign of freedom. Even more insidious is the theocracy that has grown up after the scientific disaster that affected Patema’s people. The state moulds the minds of its people from a young age to fear the sky and despise those from Patema’s tribe who are cast as sinners who are said to be sucked into the sky as punishment for past crimes. The leadership spouts the sort of religious and racial hatred that stops people from thinking and makes them fear what they do not know. It’s cleverly done and the menace of the bad guys is felt even more because the head of state is a convincing zealot, his religious-inspired sophistry comes out as a powerful mix of megalomaniac motivation and fanaticism which oozes threat and it is he and his cronies which Patema and Age must escape. 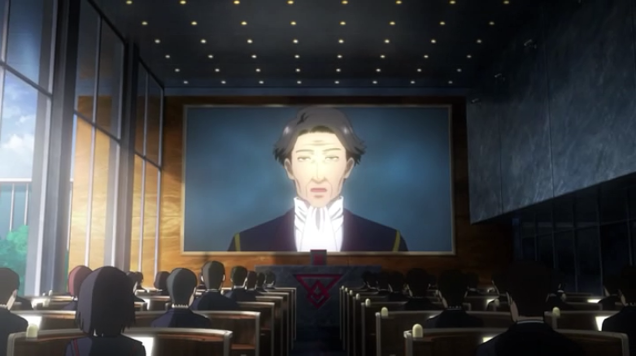 If protagonists getting their gravity mixed up is not a new and novel concept, it is one that is explored with much life and energy here in this film. It was so much fun to watch the ingenious ways which the characters tackled their situations. When the two hug they can float and, by using their differing gravitational pull and weight, they move around different locations, flying across fields and making huge leaps over chasms, scale buildings and explore. The different gravities of the character’s work for more than just bringing Patema and Age into tight clinches which is great for blossoming

romance, because  the two kids use it to escape the authorities in thrilling chases which had me grinning and bouncing in my seat as they flew through the air and bounced off objects, the quickness and agility of the kids and their smart thinking joyfully captured by a camera which zooms after them. Through their explorations they reveal bits and pieces of their world and how their two societies have become split up and all the while it is breath taking and fun!

Throughout the film director Yasuhiro Yoshiura plays around with his protagonist’s gravity which always poses a danger to them. We often get POV shots as the film plays up a fear of huge heights and the way they can see things upside down. Even when we don’t see things from their perspective, Yoshiura makes us aware of their spatial and gravitational realities as he vigorously thrusts the camera into wide open spaces, bottomless pits, and places us firmly in the shoes of the characters by twisting the camera and our perspective around so much that we lose touch with what is really up and down. I have not seen many films which made me as aware of how animation can depict space in such a fun manner.

There are plenty of heart-in-mouth moments, not least because we come to care about the different characters. It was a joy to watch and visually ambitious. Despite a deceptively light touch it has strong world building and some weighty themes about intolerance. I saw it nearly a year ago at a cinema and was stunned by the way the film played with perspective. I now own it on DVD/Blu-ray and re-watched and was pleasantly surprised to find that it still holds all of its emotional charm and the visual spectacle, including the disorientating changes in perspective that worked so well on the big screen. It is so enjoyable it has become an anime I recommend to others which is why I’m reviewing it so I can recommend it to you.