So Honey and Clover…

What a pleasant surprise. I watched it as part of an anime challenge given to me by Beats Lars. In the first part I answered questions and I sent him some questions for him to answer and recommended he try the first ep of the anime [C] The Soul of Money and Possibility Control. Now I have to review the first episode of this anime. I had no expectations about this.

ran from 2000 to 2006. The anime was produced by J.C. Staff over two seasons before getting turned into a live-action movie in 2006 and a dorama in 2008. The first season is uncharted territory for me. I didn’t even research it. I had heard of it but never thought to watch it so this turned out to be a good opportunity to try watching and I’m glad I did. The anime is a relaxing and charming comedy that seems to set up a series of romances between a likeable cast of realistic people. 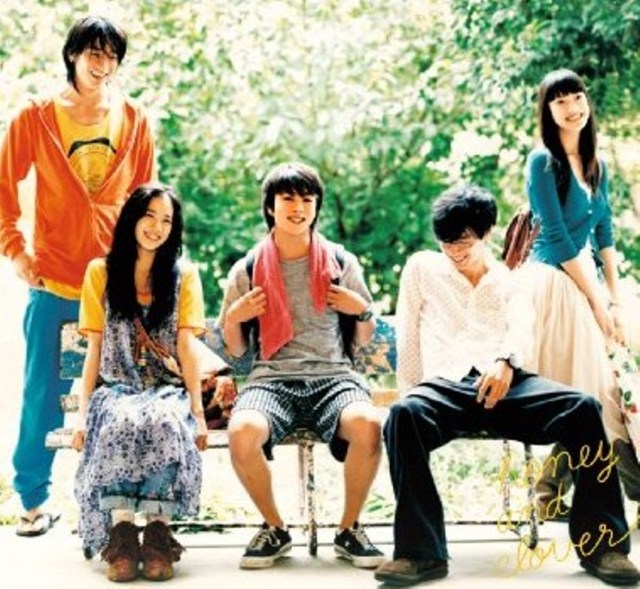 The story effectively starts with a bunch of college students who live a worn out boarding house in Tokyo. These guys are the seemingly dependable architecture student and senior Takumi Mayama, the laid back and shy Yuuta Takemoto and the scurrilous and scandalous senior Shinobu Morita, an older guy who doesn’t take life seriously is so lazy he keeps repeating a year because he’s late to class. They are all in art school and desire to make things and share an easy friendship with each other but when Professor Hanimoto introduces his cousin’s daughter Hagumi Hanimoto. She is a small and extremely shy girl who has a prodigious talent when it comes to art. A love triangle develops between the group and the new girl. 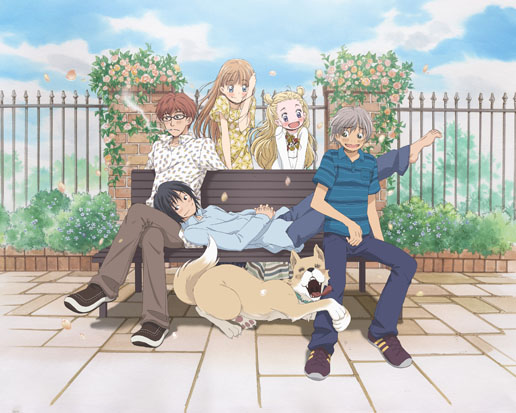 And that’s as far as episode one goes. It’s an easygoing and laidback drama with a large cast of likeable characters. The animation is highly detailed and very beautiful to look at. The character designs have the familiar long langrous limbs of shoujo manga and the music is unobtrusive piano pieces. The entire show has a light atmosphere, a whimsical air that is reinforced by the events we see in the early part of the episode which is mostly character introductons comedy. With each new person we discover the quirks of each individual characters coming out and clashing. Shinobu Morita is a handsome fella and a bit of a mystery because he disappears from time to time. The problems he causes for his friends Mayama and Takemoto are too funny to spoil but Morita is such a cad and his voice actor is so good you can’t help but be charmed by what must be the show’s comic relief. 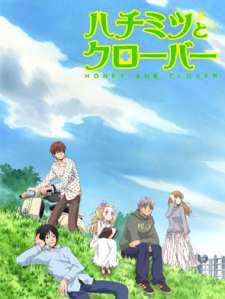 romance. Hagumi is an odd one, totally silent, but she draws an adorable reaction from the shy Takemoto who blushes at the first sight of her and acts with earnest intentions unlike the terrible Morita who takes to trying to turn Hagumi into some sort of idol and creepily takes lots of pictures of her.

Thanks to the strong characterisation seen in the first episode there’s a lot of potential for this to be more than a generic school romance story. The sights and sounds are wonderfully done to make it a beautiful anime to watch especially when coupled with the interesting character designs and characterisation which looks set to get complex. I may come to care about these guys and girls if I continue to watch it and I think I will.