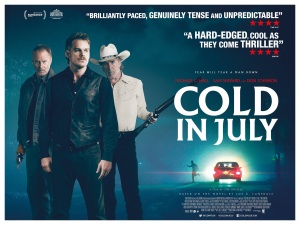 Director Jim Mickle and actor/writer Nick Damici have had a run of horror films with alternative zombie plague chiller Mulberry St (2006), downbeat and savage dystopian vampire film Stake Land (2010) and the remake of the Mexican cannibal film, We Are What We Are (2013), but here they trade genres opting to go for a pulpy thriller based on a novel by Joe R Lansdale.

Set in the ‘80s, in small town Texas, our man is Richard Dane (Hall) a picture framer by trade and a dedicated family man with a son and wife named Ann (Shaw). It is she who is startled awake at night by odd sounds coming of a thief rifling through their belongings in their suburban home.

Ann rouses Richard up who secures his family and gets his father’s gun from its hiding place. With shaking hands he loads the weapon and with quaking steps he approaches the criminal and aims the gun and with trembling breaths he confronts the burglar and… 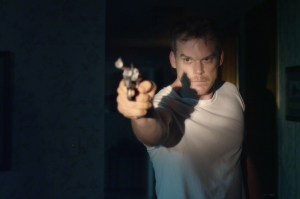 A clock sounds the hour and startles Richard who accidentally shoots the burglar through his right eye, spraying gore all across his living room wall.

When the sheriff, Ray Price (Damici), arrives and surveys the crime scene he pokes his stetson up and says to Richard, “Must be hard for a man like you. A civilian, I mean.” It is. Richard is near comatose, the horror and guilt of killing a man having almost entirely sapped him of his strength and reason and knocked the foundations from his world. The sheriff tries to be friendly and reassuring and he eagerly writes the situation off as self-defence and tells Richard that he has killed a wanted felon named Freddy Russel. “Sometimes the good guy wins.”

This does nothing to ease Richard’s fears. He may be regarded as a hero by townsfolk but in his mind he knows the truth. Worse still he soon finds that the gunshot has ignited a gunpowder trail of anguish that leads to bigger trouble in the shape of Freddy’s father, a recently paroled and hardened criminal named Ben Russel (Shephard) who wants revenge but the situation they are both in goes beyond mere vengeance.

Cold in July is an assured thriller with its story of a quiet guy getting sucked into a black hole of crime after peeling back the respectable veneer of the local community and finding a rotten heart beating underneath. It can be compared quite easily to other recent neo-noir films like David Cronenberg’s A History of Violence (2005) and the indie thriller Blue Ruin (2013) as well as drawing heavily on ‘80s mixed-genre films like suburban horror Blue Velvet (1986) but it differentiates itself greatly thanks to its frequent and well-handled changes tone and slippery sly snakelike narrative that refuses to be pinned down as it wraps itself around the audience. As familiar as the set-up to the film sounds, it is anything but that thanks to its protagonist and the willingness of its writer and director to explore familiar themes and tropes about men, fatherhood and masculinity through the protagonist.

Although Richard is not passive or a pacifist, he fails to measure up to old fashioned standards of masculinity where guys ‘man up’ and take out those who threaten their family. He is certainly highly civilised and entirely comfortable being a domesticated male, perhaps a little wishy-washy as his relationship with his wife shows. 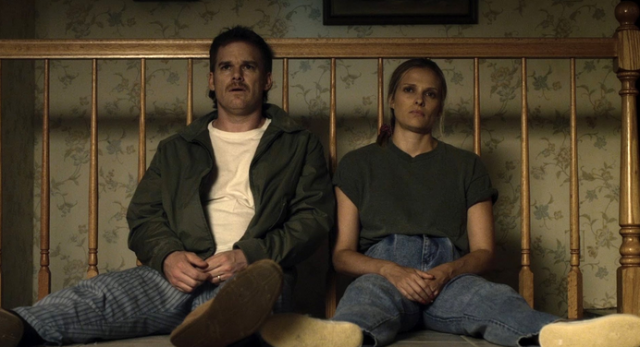 People’s attitude to him changes markedly once news gets out that he’s a killer, a newfound respect emerges something Richard is uneasy with because he is gripped by guilt over the act and the fact that it was mostly committed by mistake. Morally, he tries to stick to a righteous path and avoid violence (his father’s gun turns into a cursed item he wishes he never had, he chastises his son who plays with toy guns) but a dark seed has been planted in him one that grows as he seeks to protect his family from Ben Russel and then other threats that lurk in the night.

For Richard that fatal shooting uncovers an interest in violence and living up to masculine ideals which have been neutered by society, an interest that blossoms into a dark and compelling especially when he is in the presence of stoic and hard-boiled Ben Russel and the more garrulous flamboyant private eye Jim Bob (Johnson), two Korean war vets, who are different from each other but provide more traditional masculine archetypes and offer an odd camaraderie that intoxicates Richard, makes him want to live up to his elder’s example. As Richard, Michael C. Hall gives a nervy performance as an everyman trying to survive dangerous times and find the courage to do what’s right that makes the film but still gives hints of an addiction to danger while Johnson and Shephard who offer some comic relief. 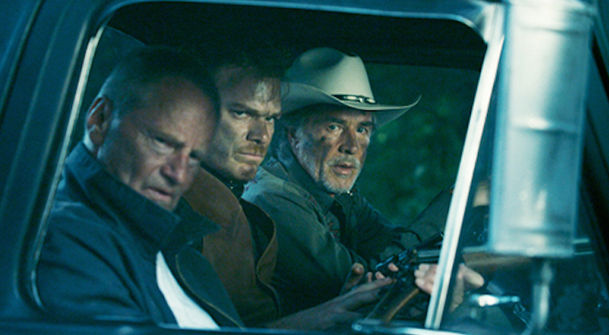 Watching the film is fun because these themes of family and violence are placed firmly in a heightened atmosphere of extreme action in a lurid story that opens the path to black comedy and shock surprises.

Visually, the presentation is glossy but full of highlights such as a dead of night criminal stalking a family home which is lit up by lightning, when the boys ride into battle, the neon lights of the cherry red Cadillac puncturing the night as the boys go on their mission. Or maybe that lurid final gun battle which is illuminated by red lighting from flames and blood-spattered light bulbs.

The film makes the most impact when it is viewed with little foreknowledge about the story since a number of plot twists unexpectedly slither out of a narrative that becomes an increasingly morally murky conspiracy thriller which wrong-foots the audience. Writer/director team Jim Mickle and Nick Damici have always shown a canny skill in reinterpreting films through the lens of their genre knowledge and in charting Richard’s battle to protect his family and gradual addiction to violence so that what starts as yet another neo-noir becomes an exciting and rich exploration of violence, revenge, responsibility, and masculinity tinged with gothic horror and black comedy.