I am really excited because Rurouni Kenshin: Kyoto Inferno is going to 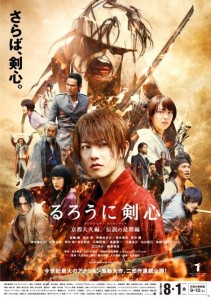 be released in my local cinema! This is the follow-up to 2012’s Rurouni Kenshin film which I really liked. Kyoto Inferno is actually the second part in a trilogy and was released in Japan back in August. It is now making its way to the UK courtesy of Warner Bros and will be in the following cinemas from next Friday:

I have booked the day off work and my family are coming along for this one because they liked the first film as well!

Here’s some info and the UK trailer and poster: