Black Butler (Kuroshitsuji/ 黒執事), Yana Toboso’s supernatural manga, is hugely popular both in Japan and the west. The manga has sold 18 million copies worldwide and it has been the source of three TV anime series and numerous OVAs and much in the way of cosplaying, games, musicals, doujinshi works and fan-girl gushing. Go to any public library in the UK and you will probably find the volumes dominating the shelves. At a time when Warner Bros Japan are adapting popular manga like Rurouni Kenshin (2012) and Wild 7 (2011) into a mid to big-budget live-action films, it makes sense that this would be selected to capitalise on its legions of fans but, as is inevitably asked with any adaptation, is it faithful to the source?

Although taking place in the same universe of the manga, the changes to Black Butler are many.

The original story took place in Victorian England but for the film the setting has been changed to an unnamed Asian city in the year 2020 where Eastern and Western cultures mix. The world has been split between East and West and the two halves are at war. A Queen rules the western nations and maintains her authority through the use of aristocratic spies known as the Queen’s Watchdogs. One of these spies is a gloomy young man named Kiyoharu Genpo. 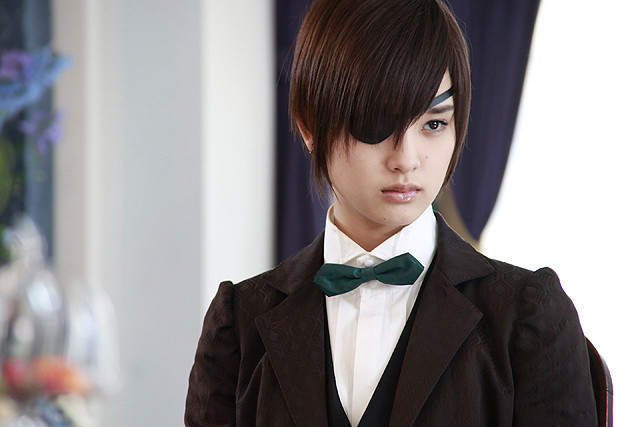 Kiyoharu Genpo? In another change the original protagonist, Ciel Phantomhive has been replaced by Kiyoharu and while he may also be the orphaned head of the aristocratic Phantomhive family (which has changed its name to Genpo) he is not actually a male. In yet another change the lead character is a young woman whose real name is Shiori (Ayame Goriki). Since only males can take over the reins of power in the Genpo family, she must pass herself off as a man and so she wears more masculine clothes and bears the name Kiyoharu Genpo.

When mummified dead bodies of various western aristocrats are discovered around the world, Shiori must break off an investigation into the disappearance of young women and focus her energies on this threat to the Queen’s power. Her only clue is a ‘Devil’ tarot card left on the body. These cards are a “black invitation” that lead to a deadly world and it may be connected to the deaths of Shiori’s parents. It is a big task for Shiori to handle but she is not alone.

As an aristocrat with a manor she has a household staff including a faithful chauffeur named Tanaka (Shigaki) and a bumbling maid named Rin (Yamamoto) and a demonic butler from hell, Sebastian (Hiro Mizushima).

He is an incredibly deadly efficient servant who possesses many skills and traits such as impeccable manners, graceful physicality, profound knowledge, finely-honed martial arts skills, and incredible good looks and his services come at a cost: his master’s soul. For Shiori, the price is worth it. “I will not die until I achieve my objective,” Shiori states, and her objective is to get revenge for the murder of her parents.

The creative team may be working with a much-loved source but they are certainly willing to take risks and make major changes to the characters and setting. The reason given by producer Shinzo Matsuhashi for the alterations was to allow Japanese actors to take on the major roles especially since he wanted to cast Hiro Mizushima as Sebastian and avoid the incongruities in seeing them play British aristocrats in Victorian London. The changes do feel odd but there are benefits. Instead of slavishly following the manga, the film’s script now has the chance to establish a new world in the same universe. The film mixes elements of the original manga’s story, gothic setting, and characters with a more familiar modern era that allows audiences to enter the story easily. However problems arise in Tsutomu Kuroiwa’s script when explaining the transition from the past to the future and establishing the world of the film. That Shiori would gender-swap is reasonable for a tale set in the Victorian period but seems far-fetched in a story set in the future no matter how much audience members may suspend their disbelief but even more problematic is the fact that the narrative is occasionally overburdened with backstories surrounding the Genpo family that are clumsily explained in atmosphere breaking scenes where characters spout off information, cackling bad guys reveal their entire nefarious plot and flashbacks cut into the flow of the action. As inelegantly handled as these moments are, the overall story follows the spirit of the manga in deftly handling comedy, gothic horror and it is very easy to follow.

What works better is the characters relationships with each other

which are neatly sketched with a lot of emphasis placed on the deliciously dark relationship between Shiori and Sebastian. This plays out in interesting and comedic scenarios where interesting dynamics take place in their engagement and dialogue. Throughout the film Shiori exposes her weakness to Sebastian through her very reliance on him as her servant. Unable to face the same amount of danger, she needs his presence and so she exploits her power over the devilish demon to make him do her bidding even for menial tasks while Sebastian constantly teases her with the fact that he effectively owns her soul much to her displeasure. This creates delicious conversations where they needle each other as the two explore their feelings which include their pessimistic and dark thoughts on humanity.

All of this establishes Black Butler as a live-action movie franchise and provides a great platform for other elements such as what we see and hear.

Where the film really excels is in every other department from the fantastic art and sound direction to the costume and set design. It all creates a campy dark drama and revels in it. Two directors were employed to create the look and execute the action with Keiichi Sato overseeing the visuals of the story Kentaro Otani directing the acting and drama.

Keiichi Sato is an anime director best known for the action show Tiger & Bunny and he brings his sensibilities to bear because the visual aesthetic is crisp and clean and highly stylised. The atmosphere of the film is dedicated to being fun, gothic and slightly morbid (though in a fun way) and very dark thanks to the mix in settings which allows the inventive and playful mixing of styles in the set and costume design.

When not in modern clubs and attending board meetings in futuristic glass-fronted high-rise buildings or having tea parties in grand manors with manicured gardens that look to have been uprooted from their natural European settings (but actually shot in Arita Porcelain Park in Saga Prefecture), the protagonists are out investigating their assignment in grimy back streets and illicit dens of vice and dockside warehouses. Every member of the Genpo household wears elaborate Victorian dress and are all shot from different angles so we can luxuriate in elaborately designed jackets, bows, hats, waistcoats, and goth-loli maid outfits. Shiori and Sebastian do stand out in their Victorian costumes and accoutrements especially when facing off against dapper gangsters with mobile phones and guns who wear in aloha shirts and pin-stripe suits. Indeed, It all feels incongruous but soon becomes fun to watch the clash of fashion.

The fashion also serves to accentuate the performances of the acting which completely captures the characters of Sebastian and Shiori. Ayame Gouriki is a naturally cute actress more familiar to me from more upbeat roles such as Akemi Ninomiya in Watashi no Kirai na Tantei (2013) but she gets very serious here and while I was never truly convinced that she could pass as male (she’s too cute for that), she did bring the requisite darkness and morbidity that the role needed as well as proving sympathetic.

While not asked to do anything amazing in terms of acting, she does provide an excellent foil for her co-stars to work with. 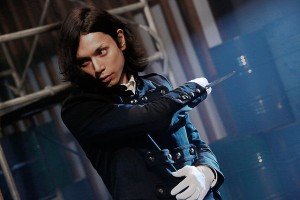 scenes to the more comedic moments. Mizushima underwent intense training and dieting to capture the Sebastian’s movements and physicality and it shows because he is exquisite to watch as he weaves between his enemies in battles with stylish, graceful, and precise movement. I must emphasise how good his action scenes are. I have seen more complex and vicious fight scenes but the sheer grace and energy and fantastic choreography (all captured by direction which is balletic) that makes use of the physical space on display here left me on the edge of my seat and grinning like a schoolboy watching a circus performance.

This excellent sense of movement extends to his more comedic moments such as picking up after the clumsy maid Rin and saving her whenever she gets into a spill. Everything seems to be planned and executed with so much finesse that he really does seem physically incredible and creates the sense that he is a supernatural being and one hell of a butler. 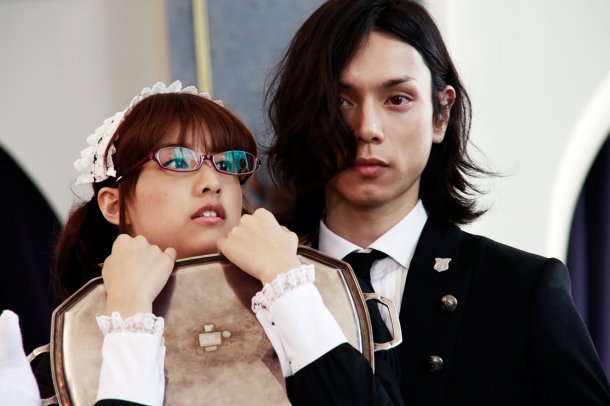 Even more impressive is the sense of the devilishness of his character which he captures with facial expressions and an exquisite voice which, through subtle movements and the sardonic and supercilious overtones respectively, cover up a depth of feeling for his master Shiori.

One of the biggest surprises for me was Mizuki Yamamoto who plays the role of Rin, the bumbling maid. I had previously seen her in The Kirishima Thing (2012) where she played the glam queen bee in the school drama and put in a decent and complicated performance. Here, she transforms into a more comedic and heroic character which revealed she is an awesome action character who made my heart flutter.

Overall, while the script may be clunky the entire experience is an easy pleasure to engage with that does a good job at paying tribute to the original source. Whether the changes are off-putting is down to each individual member of the audience. What is in no doubt is that this is a thoroughly modern adaptation that allows the Black Butler franchise to strike out in new directions. The characters have been captured and a sequel bringing back Hiro Mizushima, Ayame Gouriki and co would be most welcome.