Final Fantasy XV was shown at the recent Tokyo Game Show and I think it looks great buuuut… it has been in development for nearly TEN YEARS in which time is has had a reboot and new director in the shape of Hajime Tabata (director of the excellent Crisis Core). These delays and  makes me think of the troubled development and reception of Final Fantasy XIII.

What I remember about the launch of Final Fantasy XIII back in February 2011 was the critical reception of the game with websites and publications such as Edge magazine giving it 5 out of 10. This for a major entry in the main franchise! Could the poor scores have been justified? I was curious and bought the game.

My overall experience was mixed. Final Fantasy XIII starts off disastrously as it gracelessly explains gameplay mechanics and a bloated and clichéd narrative full of crystals, authoritarian governments, destinies being fought and gods to be challenged, cackling bad guys and heroes full of self-doubt.

For what seems like too long and for the sake of a badly written chase narrative, the game sends players scurrying around  a long series of tutorials and cutscenes that are never fun to endure. The player is forced down a series of palette-swapped corridors and made to battle identikit enemies as the game sluggishly hands out combat techniques and plot developments. Interaction with the world and exploration take a back seat to dull battles interspersed

with watching dull films. The grand narrative and combat system don’t kick in soon enough to save events and the game comes too close to being about as interactive as viewing a landscape painting in an art gallery. The feeling hangs over events because there are few shops and mini-games, no villages to explore or communities to interact with and fewer people to talk to. When you do talk to non-player characters they utter bland short lines. It’s easy to see removing RPG ephemera and mechanics like item management and pointless quests/conversations as a deconstruction of the genre as some claim but it makes the game less interesting to venture into.

At times it feels like the developers do not trust the player enough to let them explore the gameplay and the world and resorts to lecturing them slowly. Indeed it feels like it takes nearly half the game before you can fully exploit the intricate combat system and you can actually start levelling up characters the way you want to.

It is here, on a world called Pulse, where you do get to fully exploit your summons and your character’s classes and can start tailoring your combat teams. The game opens up not least because Pulse is more of an open world. Players can explore wherever they want and battle whatever they see. 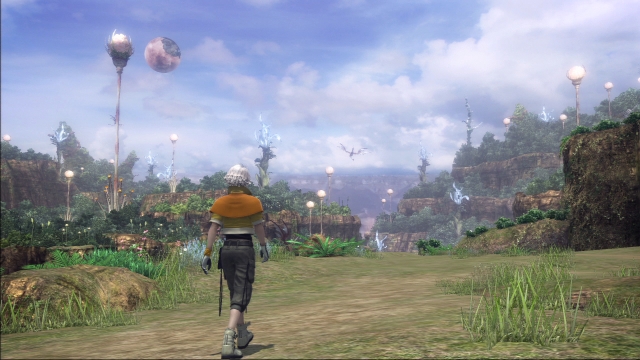 It is here that the boredom is shed and a sense of wonder starts to grow along with the freedom granted to the player in pushing the story and characters forward at the speed they want. All of those dull hours training were for this moment when you are let loose and a sense of the grand adventure finally comes to life. It is also here the feeling that training could have been cut short comes to life showing up just how bad the game’s design is in the early stages. It’s hard not to escape the feeling that you have wasted tens of hours of your life… When you do get to this point, the sense of an epic narrative, a traditional element of Final Fantasy, is fully realised by the scenery and freedom to explore.

World building has always been a key strength of Square Enix and it works here for the most part. The Final Fantasy series usually provides a sense that players control a person travelling through unique places with unique cultures and histories all intermingling to make a rich and compelling story and it is hard to deny that the world of FFXIII is well-realised and stunning to look at.

The graphics, music, UI, on-screen menus and are sexy and slick and beautifully realised – probably the only menu in an RPG I would keep accessing just to see the character animations. The physical world is beautiful and varied, made up of grasslands, forests, high-tech cities in the sky.

The locations are gorgeous to look at, colourful and evocative with rich and varied colour palettes. The soundtrack for both is an ambient electronic onee held down by a gentle percussion, with an insistent piano melody and ghostly female vocals provided by Mina, which weave in and out. Take a listen.

Pulse is a vast and intriguing area to explore, a huge rolling glass plain with caves and streams, cliffs that hang into an abyssal drops, jungle mazes and frosty mist-covered hillsides and the entire place teems with life as multitudes of creatures co-exist and wander around. With the narrative disappearing, players can engage in hunting quests, clamber over the ruins of an ancient civilisation thick with packs of Borbear who dance around in rhythm, battle Feral Behemoths that stalk the plains, and gape at the herds of Adamantoise, creatures the size of mountains that can wipe out the player and their party with two stamps of a foot. 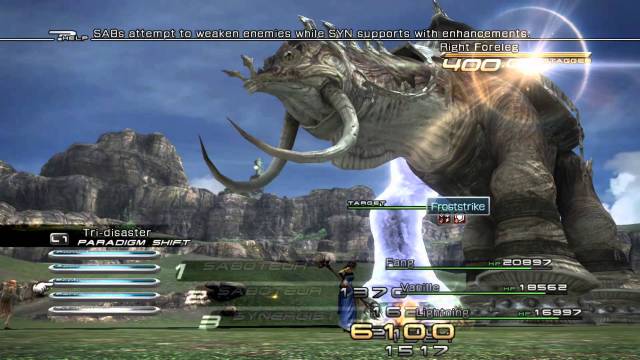 The graphics and music provide a brilliant skin for these locations and the combat which is fast, flexible, and fun flourishes. It is here that the game provides a lot of depth thanks to the interlinking of classes and skills and battle formations.

Once I was able to get to Pulse and experience the full flow of combat, get over my problems with the world and story and build the characters I wanted I enjoyed the game a lot.

The player effectively trains their team of six and manages their tactics in battle and through canny timing and playing with formations and the stagger and active time battle gauges. The battles became fascinating matches full of jabs, looking for an opening to exploit in the opponents defence so the stagger gauge hits max allowing the player to then pummel away  at the enemy and do massive with glee and watch their health disappear quickly.

The main character is supported by two others and they can be switched in and out of teams with ease. As a result there are a lot of roles and attendant skills that provide great depth. It was exciting to tailor different formations and tactics both before battle and during it, quickly switching between options as the flow of battle alters. It became a battle of wits to master situations and it became faster and faster the better the payer became. One could tackle humongous enemies by rolling into battle with the main character’s class set a Commando (damage dealing) or Ravager (offensive magic) with support from a Saboteur (debuffs) and Synergist (buffs) and switch formations to something like Evened Odds (Saboteur, Synergist, Medic) if things go badly and to Relentless Assault (Commando, Ravager, Ravager) when you want to press on the offensive and fling spells at the poor monsters.

The last paragraph was boring and confusing to read so let me show you some combat.

And this is a reminder that as good as Bioware and Bethesda are at making RPGs, they don’t have the style of Square Enix. The UI flows in and out smoothly, character fly around the screen and it is so so satisfying seeing the fireworks happening as demonstrated by the acrobatics of Lightning’s Army Of One.

As much as I dislike the script this feeling was exacerbated by the poor opening. By the end of the game I enjoyed the different characters and their relationships building up. As badly written as a lot of it was, I enjoyed guiding Sahz and Vanille in slogging through the gorgeous Sunleth Waterscape, scrambling their way through forests and skirting gorgeous lake shores, all the while, blasting Flans with magic before allowing themselves to relax in the pleasure town of Nautilus. I enjoyed playing as Lightning, dragging Hope through the Gapra Whitewoods, a sparkling crystalline forest shrouded in eternal twilight. Lightning toughens Hope up (mostly through my relentless grinding which saw me wallop the boss easily) in the chilly confines of their location, and she opens up as a character, changing from a completely unforgiving and harsh soldier to tough older sister as they fought against monsters and evaded hostile government forces.

Lightning became my favourite FF protagonist not named Zack Fair because of her no-nonsense attitude. She speaks as much with her fists and has little patience for most of the characters who fulfil the rote role of troubled male who lost his mother, hyper young girl, mouthy braggart types and grumpy old men.

She is cold and disciplined she just wants to get her job done and isn’t afraid of anything or anyone. She has the smarts, confidence, and the guts to do whatever it takes and it made a change to play her, a grown woman, rather than a bland male lead with amnesia or a little girl. She is so brilliant she starred in her own game.

She would have been great in a world as complex as Final Fantasy XII which still remains my favourite entry in the series, a game with a rich world and racial diversity. I’m a fan of the games that take place in the world of Ivalice (Final Fantasy XII and Tactics Advance and Vagrant Story). Here’s an interesting podcast from Retronauts discussing the work of Yasumi Matsuno and his Final Fantasy games.

Once you get past the initial opening and get to the combat system FFXIII becomes a lot more fun.

This is a Final Fantasy title but feels so different from previous entries in the main series. The worlds and lore of different Final Fantasy games are usually beautiful and complicated and it is no different here but the opening 10 – 20 hours are truly awful – really game breaking for those who have no patience. Slog past it and get to test out the full battle system in the open world setting of Pulse, and the game opens up, the art and animation come to life and the music soars. The poor scores and vitriol it received were a little much when you lose the first part, perhaps 5 wasn’t the wrong score to give. My score would be 7.

All images are from the Final Fantasy Wiki.