Welcome to another trailer post. The autumn season is upon us which means that many of the major British film film festivals have started announcing their programmes. Scotland Loves Anime were the first off the mark (and you can read more about that festival over at Otherwhere) followed by Raindance and the BFI London Film Festival. I’ve already written up the preview for the Japanese films at Raindance and the LFF will follow this post on Monday.

What can I say about the line-ups? No surprises. In some ways that is

a good thing. The likes of Tokyo Tribe, Still the Water and Fuku-chan of Fukufuku Flats were already on tour across the world and are finally reaching the UK as expected. In some ways it is pretty bad. There are a number of films that were screened at Rotterdam or are screening right now at Toronto which could have made the cut but didn’t and it would have been nice to see the festivals surprise us with their inclusion. I’m talking about adventurous films that have had the sort of stellar reviews or have the type of synopsis that sounds so bizarre you become convinced the film will be fun and end up paying silly amounts of money to travel long distances to sit in dark rooms and watch films (like I do). Over Your Dead Body, The Pinkie, Nobi (Fires on the Plain) aren’t reaching these festivals and I cannot help but think it is a shame…

… but there you go. The business side of the film world is tough and despite that bit of a moan I 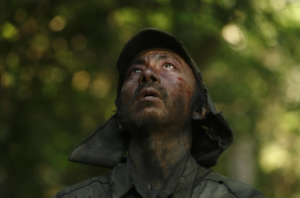 understand and appreciate that people are releasing films I want to watch and so I urge everyone to support the films we do get over here. I’ve already booked days off work for my selections and I’m already grinning over the fact that I’m going to be viewing my most anticipated title of 2014… The World of Kanako! I’m so hyped for that!!!

Autumn also signals the start of a new season of anime and I finished my Anime UK News Autumn 2014 Anime Season Preview. Part one and part two are already out as is my preview for Raindance which I linked to earlier. I also wrote a trailer post for the film Mother which releases at the end of this month.

What’s released this weekend? Not that much which is a relief because I have been pushed for time this weekend!

A Record of Sweet Murder 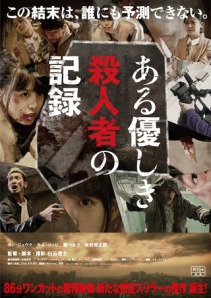 Koji Shiraishi makes a lot of low-budget horror films like Noroi and Cult (review some time soon). He has this new title, a co-production between Japan and Korea! Kim Kkobbi is an actress who regularly pops up in Japanese films and she works alongside the director who plays the cameraman.

The story begins when a reporter named Kim Soyeon is contacted by her childhood friend Park Sang-joon, a man who recently escaped a mental hospital and is said to have urdered eighteen people. He promises her an exclusive story if she brings along a Japanese cameraman. When she meets Sang-joon he explains he has been hearing the voice of God and has been promised a “miracle” if he kills 25 people. The miracle is the resurrection of  mutual friend.  What she next witnesses is horrifying…

This brings back horrible memories of Samurai Flamenco, an acerbic comedy that skewered super sentai clichés by being about super heroes in real life facing the fact that movies and reality are very different to each other… before the writer lost his mind and turned it into some silly cheap-looking show about a super hero battling aliens. If this manages to do what the first half of Samurai Flamenco did before it totally lost its mind, it will be worth watching.

Wataru Honjo (Karasawa) is a eteran super hero actor who loses a rle to a rival, the younger actor Ryo Ichinose (Fukushi) whom he thinks is not worthy enough for the super hero genre. The two work together on a film and as they train and act they come to resect each other. Then Ryo gets a role in a Hollywood film called “Last Blade” but when a stunt actor refuses to perform a dangerous scene involving a ninja fight in a burning house, it seems like the film’s production will be derailed. That is until Wataru steps onto the set!

Ran Igarashi’s four volume manga of the same name is adapted into a film. The story is a brother-sister rom-com. High school boy Goro Hozuki, has an older sister named Haru but the two aren’t blood relatives so apparently it’s okay if they get “close”. They get close quite a bit because lustful Haru loves to play pranks on him. Apparently the manga is funny. I don’t read titles with this content so I don’t know.

I’m a big fan of the original two Ghost in the Shell films and so I’m excited to see this new reboot getting a western release. I’ll pick it up eventually. If you need to be convinced you can watch the first nine minutes here. The synopsis and trailer are taken directly from Anime News Network:

The fourth installment’s story takes place amidst signs of postwar reconstruction in the winter of 2028. Tensions are rising in New Port City as demonstrations are held concerning the interests of foreign cartels. This leads to a shooting incident involving riot police. It all started with a cyberbrain infection released by the terrorist “Fire Starter.” An independent offensive unit led by Motoko Kusanagi entrusts the suppression of the situation to their ghosts and aims for their own justice. Below the surface of the incident, lies the “tin girl” Emma and the “scarecrow man” Vrinda, Jr. As Kusanagi deals with the incident, she draws near to what those two ghosts were seeking.

4 thoughts on “A Record of Sweet Murder, In the Hero, Hozuki-san Chi no Aneki, Ghost in the Shell: ARISE border: 4 Ghost Stands Alone Japanese Film Trailers”