The Raindance Film Festival announced its line-up yesterday and it is filled with a lot of Japanese indie film gems released at the tail end of last year and throughout 2014. There 100 features and over 150 shorts and the Japanese selection makes a large part of this. Raindance remains the best place to see a lot of indie films with the likes of Yosuke Fujita and Mipo Oh getting their latest films screened and there are a lot of shorts from New Directions in Japanese Cinema, a collective of filmmakers who have been making films for a spell now and are a good indicator of what the indie scene looks like. Here’s the trailer for the festival:

The festival takes place from September 24th to October 05th, at the Vue Cinema at Piccadilly Circus and features a lot of titles from around the world.

I enjoyed a lot of the titles I saw last year and I’m going again because the quality of the films looks great. The programme has a number of movies and shorts that have caught my eye while writing trailer posts and, furthermore, the directors/cast/staff will be coming to the UK from Japan and so I think it best to show them some support and also hear the inside story on how their films were made, something which is always a thrill.

Third Window Films will be promoting their four of their latest films at the Raindance Film Festival, with all four titles having directors over to introduce their films and have Q&A sessions and interviews. Fuku-chan of Fukufuku Flats by Yosuke Fujita, The Lust of Angels by Nagisa Isogai, And the Mud Ship Sails Away by Hirobumi Watanabe and Buy Bling, Get One Free by Kosuke Takaya will all play.

Here are the people who are making the effort to travel across the globe to meet us:

Hirobumi Watanabe and his brother/producer Yuji Watanabe, and cameraman Bang Woohyun, all of whom worked on “And the Mud Ships Sails Away”

Hoshi Ishida, actor in “Touching the Skin of Eeriness” (which plays back to back with “Lust of Angels”)

Kosuke Takaya, director of “Buy Bling Get One Free”

It’s great to see Third Window Films supporting a new generation of talent with the upcoming release, New Directors from Japan (which I backed on Kickstarter).

What about the other films? No release looks likely in the west so this is the best chance to see them.

Here’s the line-up. Click on the titles to get take to the festival page for a much more detailed explanation of the films you’re interested in:

How Selfish I Am

When I write about these films in my trailer posts I can sound flippant as I was with this one but it’s a musical dramedy created Sekaikan Ozaki of the rock band CreepHyp and directed/adapted by Daigo Matsui (Afro Tanaka) so it’s meant to be funny and judging from the description, I’ll love it.

It is about a character who hooks up with a runaway girl, an OL (office lady) and a geek all of whom are miserable and angry and frustrated and feel unwanted by life and others in general. Kumiko, Mie, Tsuda and Rikuo live separate lives but are tied together by one simple fact in this pastiche of irony, loneliness and regret: they all want to be noticed. 4 episodes tie together to make a monumental feature film.

The Light Shines Only There

Even before it went on general release in Japan early reviews started to filter out of festivals that this was a beautiful and engaging drama and must be seen. It is based on a novel published in 1989 and updated for the screen by the director Mipo O (Quirky Guys and Gals) and the writer Ryo Takada (The Ravine of Goodbye). It stars Gou Ayano (Rurouni Kenshin, The Story of Yonosuke) and Chizuru Ikewaki (Shokuzai). It’s a film full of despair but ends on a little bit of hope. I guess I’ll cry during this one…

Tatsuo Sato (Ayano) quits his job and does little with his days until he meets Takuji Oshiro (Suda) at a pachinko parlour and strikes up a friendship. Takuji invites Tatsuo back to his home where he lives with is sick father, mother and older sister Chinatsu (Ikewaki). Tatsuo becomes attracted to Chinatsu, who shines even in their difficult situation.

This was released back at the start of the summer and is the latest title from the prolific pink film director Shinji Imaoka (director of Underwater Love, writer on The Drudgery Train). I was not immediately taken with the film but reviews on the Japan Times website are positive. This could be one to watch.

Toko (Kudo) arrives to the ‘Shinjuku Golden Road’, a labyrinthine street of bars and drunks, looking to get intoxicated and possibly to find love. After getting mindlessly drunk, she is allowed to stay at a bar’s upstairs room – but will she ever be able to leave?

Fine, Totally Fine (2008) is one of the funniest films I have seen from any country and a film I hold close to my heart so I’m desperate to see Fuku-chan of FukuFuku Flats which is by the same director, Yosuke Fujita, and is packed with comic stars like YosiYosi Arakawa who was very funny in the 2014 comedy Judge!. Although it has been touring the festival circuit and winning plaudits from critics, trailers are a bit thin on the ground so you’ll have to make do with a teaser.

Tatsuo is a nice guy and has the nickname ‘Fuku-Chan’. He lives and works in “FukuFuku Flats”, a run-down apartment complex where he paints kites as a hobby. Despite being such a nice fellow, he finds it hard to socialise with people and despite his friend Shimacchi trying to set him up with a girl, he refuses al attempts. This is down to the fact he suffered a prank in junior high school and the reappearance of a girl named Chiho signals that he may change…

This is one of a number of films that will be on the TWF release, New Directors From Japan. Early reviews have been positive!

Saori, a schoolgirl, is molested on the notorious “molester train” of the Hanagawa line and rescued by another school girl who witnesses the act. The girl who rescues her turned out to be a new student of Yamashiro Gakuen high school, which Saori also attends. The mysterious new student Yuriko, is rumoured to be a “parent killer”. Yuriko then leads Saori and her friends to hunt molesters on the Hanagawa line…

Touching the Skin of Eeriness

This was released on a busy weekend alongside Kiki’s Delivery Service and other titles in March of this year. It’s inclusion at Raindance comes as a surprise but a most welcome one. It stars a lot of actors I like – Shota Sometani, Jun Murakami – and the trailer intrigued me a lot when I first saw it. It plays back to back with Lust of Angels.

And the Mud Ship Sails Away

This one features in new directors from Japan and Adam Torel has spoken highly of this one. The director and his brother will both be at a screening of the film.

Takashi is 36 years old, unemployed and completely aimless. He lives with his grandmother, repeating the same routine – game centre, bowling center, watching TV – day after day. This suddenly changes when Yuka shows up, claiming to be his half-sister. Confronted with a new situation, Takashi decides to change his life…

The Horses of Fukushima 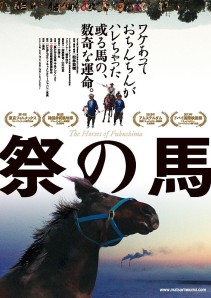 Director Yoju Matsubayashi was behind the documentary 311 which was all about the Great East Japan Earthquake. He returns to the subject with a new work based on the story of the wild horses of Fukushima that survived the 3/11 disaster. This was originally released in December last year and since then it has popped up at various festivals like Japan Cuts.

I met Ian Thomas Ash last year’s Raindance in the press area. When I say met, I mean I saw an American sat on the floor typing on his Mac and talking away in Japanese. We were introduced, I shook his hand and stood around awkwardly as I waited for another film to start and wished I could be cool, just for a moment. Although I wrote about his documentary, I  wasn’t going to see it. Ah, what a shame because it turned out to be good. He will be in London for Raindance again, so maybe I’ll get another shot…

‘-1287’ is a documentary about the final days of a woman’s life. Her name is Kazuko and as the film progresses, she bonds with the filmmaker, but her health also declines at the same time. She opens up on her thoughts and fears of life, death, happiness, and regrets.

Buy Bling, Get One Free

I wrote about this film in a trailer post back in March and now we get to see it as part of the short film section. This will play back to back with two other 35mm shorts from Vipo’s NDJC project which were featured in the same trailer post and can be seen in the video below. The director will be in attendance and his work is included in the New Directors From Japan release from Third Window Films.

After being dumped by his girlfriend while on a date Kamono Naoto gets really down. ‘What’s wrong with my fashion?’ he wonders as he’s told off for being embarrassingly over-the-top with his see-through jacket, feather shorts and patterned pantyhose. Nobody understands his fashion. Neither his friends nor even a writer for a fashion magazine he likes.

The Fragrance of Machine Oil

Kaori is a girl who works at a factory in Amagasaki City, where she lives with her older sister. One day, when Kaori is trying on her mother’s old wedding dress her sister returns to berate Kaori for ruining the dress with her ‘factory’ smell. This sends Kaori into depression and causes her to reflect on her status in life and ability to find love. (Synopsis straight from the Raindance page).

This comedy short plays back to back with How Selfish I Am! The synopsis is straight from the festival site.

A woman waits for a man in a café. He is late, and she gets irritable. A tense date ensues, but it’s going to be interrupted by some unusual events.

This was released back in March of last year (where I gave it a rubbish translation) as part of a group of shorts. Here’s the trailer and the synopsis from the site.

High school dropout Hiroe, 20, is living a dreary life, unemployed and shunned by her peers. One day, she runs into Tatsutoshi, 10, a fat boy with a girl’s red school pack on his back, and she learns that he lost his young sister in a car accident six months ago. To cheer up the boy, Hiroe invents a story: “If you burn the keepsakes of someone you love at night on the beach at Nagahama, that person will be reborn.” Tatsutoshi wants to believe. To carry out this ceremony, Hiroe enlists the help of a former “client,” and the three of them set off for the sea.

3 thoughts on “Japanese Films at the 2014 Raindance Film Festival”