Writing trailer posts is long and sometimes difficult but I find it worthwhile because it introduces me to great films that I want to see. One such example stretches all the way back to January when I wrote about a film called Plastic Love Story. I was interested in the trailer but, as is the case with many Japanese indie films, I was resigned to probably never seeing it. Well that could change because there is a Kickstarter already underway to get it screened at international film festivals!

I was contacted by the makers of the film and directed to the Kickstarter page which contains a lot of information about the project, the filmmakers and their ambitions for taking the film on to the international stage. Here’s info and trailer:

‘Plastic Love Story’ presents the coming of age of three girls in Japan and portrays the strength of Japan’s young generation as they overcome hardships. It is from director Ryutaro Nakagawa who is described as one of the leading  young up-and-coming filmmakers in Japan and this might be for a good reason since his films have screened in the US as well as Japan.

The project requires $7,500 to take the film abroad. Some of the 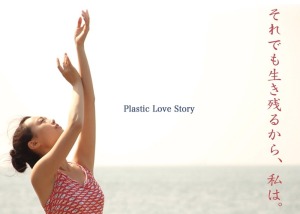 reason for the price tag, as explained on the Kickstarter page, is for translation costs, editing and paying entry fees for the festivals.

The film has already been screened at two cinemas in Tokyo back in January (which is when I picked up on it) and it got excellent reviews:

The film was written about in “METROPOLIS” magazine (Japan No.1 English Magazine) where it was described as “lyrical and powerful”. Additionally, the review goes on to mention “Tokyo New Cinema collective, … is revitalizing Japanese film without the backing of any studio”.http://metropolis.co.jp/movies/eiga/plastic-love-story/ (English Article about PLS).

I watched the trailer back in January and I was impressed. I watched the Kickstarter trailer and I was even more impressed and I have decided to back the film. At the time of writing, there are 13 days to go and the target is still some distance away but hopefully we’ll see a flurry of activity!

We would love it if you could help us share Japanese independent movies with the rest of the world!

So I want to ask for help from everyone — we need your contribution. We can start working on film festival applications as soon as we get support. Our goal is to screen the film around the world. Recently, many Japanese films have been attracting attentions and getting awards internationally, yet the film themselves don’t find many opportunities to be shown internationally among audiences. There are many Japanese films that could be enjoyed by the Western world besides ‘Godzilla’ or ‘Seven Samurai.’ We want this project to be the beginning of an effort to properly share Japanese movies with the rest of the planet.