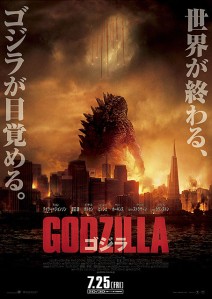 Godzilla is massive. Not just in scale (which he is) but also as a franchise. Ishiro Honda’s nuclear powered lizard has starred in 28 films and a number of cartoons since the world first saw it in the original 1954 film. It launched a whole genre of movies known as kaiju eiga where there is now a whole roster of weird and gigantic creatures that battle each other and destroy cities. Hollywood was quick to recognise the power of Godzilla and released a re-edit of the original film in 1956 with an English dub and Raymond Burr as an American reporter. Appearances in the west died down until 1998 with a poorly received and rather risible attempt at making a big-budget spectacle.

Fast forward to 2014 and enough years have elapsed that people have forgotten that misfire and there is a new generation whose only encounter with Godzilla is probably a reference in reviews of Pacific Rim (2013). It was time for another attempt at a reboot and to lead it they hired Gareth Edwards, a man with only one major movie credit to his name, the indie monster movie Monsters (2010). It was a canny hire that has worked well because this movie revitalises the monster as far as western productions go, and establishes firm ground for the final two episodes of the planned trilogy.

The year is 1999 and the place is Janjira, Japan. Joe Brody (Cranston) and his wife Sandra (Binoche) both work for a nuclear power plant. After their son, Ford, heads to school they get to work investigating seismic activity and its effects on the plant. A disaster happens and the plant goes into meltdown.

2014, Ford Brody (Taylor-Johnson) is a US navy ordnance disposal officer back in San Francisco after a long deployment. His family time with wife Elle (Olsen) and son is interrupted by a call from the police in Tokyo. His estranged father has been arrested after trespassing in Janjira, which has now been quarantined. Ford bails his father out and accompanies him to the abandoned city to recover files that will prove the disaster had a mysterious origin. 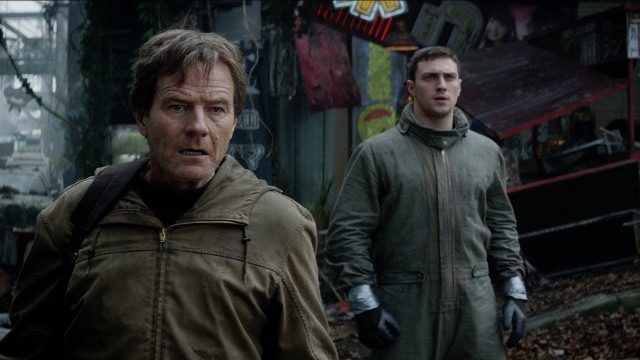 They succeed in infiltrating the city and retrieving the data but are arrested by Monarch, an international organisation that has monitored Godzilla since the 1950’s and is holding a mysterious creature known as a MUTO (Massive Unidentified Terrestrial Organism) that poses a massive threat to humanity.

The two come to the attention of Dr. Ishiro Serizawa (Watanabe) and his assistant Vivienne Graham (Hawkins) and just in time, because the thing wakes up and causes massive destruction as it heads across the Pacific to the west coast of the US for a rendezvous with another creature…

This alpha predator of yours, doctor, do you really think he has a chance?

Everything about this film is large including the titular titan. The budget came in at around $160 million and it can be seen on the screen because the creature, based on the original design, is brought to life by amazing CGI, set construction, and art design which manages to believably place Godzilla and his monstrous foes in a contemporary setting and creates a string of scenes featuring massive battles and large-scale destruction. 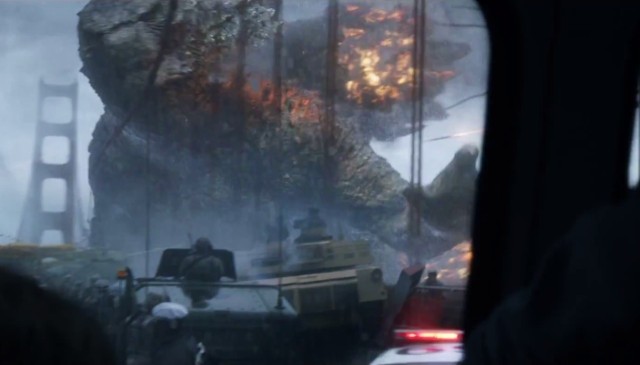 Intelligent use of CGI and visuals shouldn’t come as a surprise if one knows about the director. Gareth Edwards has a background in making CGI for documentaries before he had his hit with Monsters where he proved adept at combining subtle spectacle and a believable story of a world where monsters and humans co-exist. This, however, is a step up in terms of scale and shows an amazing scope of imagination.

humanity having to understand the creatures. The script for Godzilla creates creatures that are following instinctual patterns. Despite looking evil and scary (as giant insects would), the MUTOs’ aren’t malign creatures actively seeking to destroy humanity, they just want to mate and humanity just happens to be in the way. Rather menacingly, if the MUTOs’ are allowed to breed then it is game over for the world and this allows the production team to call back on Godzilla’s friendlier appearances in movies as the defender of humanity. Godzilla is recast as something of an eco-warrior striding across the Earth whenever the balance of nature is threatened by the appearance other monsters and blasting stuff with radioactive breath. This is the subtle lacing that holds together an action-packed spectacle.

The arrogance of men is thinking nature is in their control and not the other way around. Let them fight.

Through a simple pattern of building up tension as a monster approaches and then letting loose with destruction, a lot of which reminds a viewer of natural or man-made disasters like a tsunami.

The opening gambit of the film is a truly terrifying nuclear meltdown at a power plant that reminds one of the crisis at Fukushima in 2011 and this is the set pattern of action, quiet moments where relationships between people and places are established in scenes of normality or military build-up which are then shattered by the slow and devastating appearance of monsters lumbering through cities. It is stunning and gut-churning because the interaction between the humans and monsters is perfectly done.

The creatures have that sense of awe-inspiring scale that is brought out through a combination of intelligent direction and editing and the great CGI and art. It is hard not to be intimidated when viewing the creatures from low-angle and POV shots and seeing the creatures lumbering across the landscape or brushing over skyscrapers. Ensuring that people are in the same scene, tiny figures swept aside by the monsters and the devastation that they bring in their wake, adds brilliantly to the sense of size difference.

giant lizard, it is easier to cheer him on when fighting against the MUTOs’ which are definitely alien thanks to their metallic insectoid look. The sound of the creatures emitting their clicking noise and the sight of their spindly limbs is enough to make one’s skin-crawl and the moment when Godzilla lets loose it’s full-throated roar is both intimidating and joyous as it signals the beginning of an epic fight, a sluggish and brutal battering that sees the creatures constantly crashing into buildings and gouging holes into each other. Thrilling stuff!

The film has a large and starry cast amidst all of the carnage with great actors like Juliette Binoche (Certified Copy), Bryan Cranston (Drive), Ken Watanabe (Inception), Sally Hawkins (Blue Jasmine), and Aaron Taylor-Johnson (Kick-Ass) but despite their presence, the focus is on establishing the monsters in a real world setting and making them a force of nature. It seems that the actors hired to play the roles are much too large for the limited screen-time but, and this is crucial, they sell the roles that they inhabit and create something of an emotional baseline that allows the terror of the monsters to be more effective.

Overall, this is a fun and exciting visual spectacular that brings Godzilla back to life for a new age. The focus is on the creatures and the sense that they are a force of nature which is brilliantly relayed by the visuals. This takes the first step in establishing the franchise.