This is one of my rambly reviews with spoilers. Please watch this 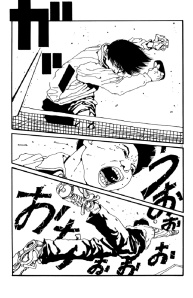 Ping Pong: The Animation is one of my favourite anime of the year.

It’s based on a manga by the influential and much-respected Taiyou Matsumoto (writer of Tekkonkinkreet) and it was adapted into a live-action film starring Arata, which is how I first encountered the story when it was screened on BBC Four back in the early 2000’s.

I loved it and bought the DVD. I never expected it to get an anime adaptation courtesy of a commission from Noitamina, but it did and they gathered together a talented team led by a very interesting director named Masaaki Yuasa, famous for the unconventional Mind Game and The Tatami Galaxy, two other anime with unique animation and designs, and lots of critical cache. Hopefully, Ping Pong: The Animation will join them to be remembered by more than just anime fans but also by people with a love for a good story.

Ostensibly, Ping Pong: The Animation is a sports anime. The plot is simple and could be applied to any title from the genre – a group of characters find their fates connected through a sport and battle each other to be the best in a tournament! 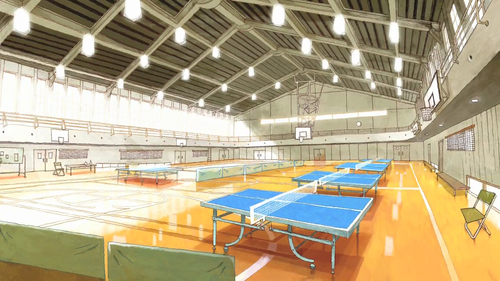 That’s only a frame to hang a beautiful portrait of what it means to be human. The focus on characters, fleshed out so wonderfully by the writing, is what makes the show fun. The characterisation slowly evolves over the 11 episodes as we see main characters, childhood friends Peco and Smile battle rivals like an ace from China called Kong, and Japanese champ Dragon.

Starting with various levels and skills, they are all playing for different reasons such as love of the sport, friendship, financial gain, and family expectation. Unfortunately, along the way, they have lost sight of what made them love ping-pong for various reasons but through the sport and the challenge of rivals, they rediscover their joie de vivre and passion to live that defined their innocent childhood years when the sport was still new and playing it and making friends through it meant everything to them. By the end, everybody has grown into a better person.

It unfolds over the course of a year and a bit, and it advances through a lot of matches, training sessions, and flashbacks. Throughout the story there are many small scenes that show character development in a piecemeal fashion, a player accepting help from others, offering thanks and advice to people they had a problem with, and a smile emerging from a good match. Some anime take 24 episodes and throw lots of action scenes and melodramatic dialogue at you to make you realise this but Ping Pong takes 11 episodes. Some anime need a whole episode to make a viewer emotional, Ping Pong litters every episode with scenes that are a few minutes or less that will reveal a whole emotional galaxy and tug at a viewer’s heart-strings.

Anchoring the story is the friendship between Peco and Smile, both

naturally (and insanely) talented but coasting on their skills and so never really challenging themselves. Peco is resting on his laurels, having demolished all challengers, and so he spends time playing small fry until he gets humiliated by a rival and this shatters his world. His arc is all about finding his passion again and his redemption. Smile doesn’t have the drive to become a champ and is only in it for Peco’s friendship. Through flashbacks, we see how much his friendship with Peco means and it culminates in the last episode in one of the best sequences in recent anime where the dramatic match is replaced by this sequence which had me emotional (I bet there are a few people rolling their eyes at this because I get emotional a lot during films but this one sequence got me!).

Keep your eyes open for that victory photo where Smile, who is called a robot by his detractors and never smiles, has the biggest smile on his face as his ‘Hero’ returns.

Kong has travelled from China after being kicked out of his home league and exiled to a foreign team. He is in Japan to take up a post as a star to help a poor team improve their game. When we first meet him, he is a superior player and he shows disdain for his new Japanese colleagues, his mind constantly on beating his foes so he can earn a ticket back to China. He plays up his iron-man persona by refusing to play others and humiliating those who do step up. Scenes of him stoically leaving China and his mother behind are repeated and extended to reveal him crying as he goes through tough emotional times. Watching him lose and then come to terms with his position resulted in a wonderful character arc where he goes from indifference to his team to sharing Christmas with his mother and teammates and ends up becoming more Japanese than just by singing karaoke.

It’s a show more about the bigger existential questions surrounding the players such as how the pain of being talented or mediocre can affect a person, how working hard to be the best and maintaining that position can build a cage due to the crushing fear of failure or the expectations of others that traps people and how overcoming obstacles, living up to talent and shining on court can shape a person’s life and friendships.

Each character struggles to figure out what they are playing for, what they are living for and they are forced to grow and adapt. They realise that life is bigger than what they first thought and there are many paths to happiness, they just need to break out of the cages and realise what makes them happy and work for it.

The sport is thrilling stuff to watch and there’s lots of technical details but it’s mostly about these character developments, what with its fast pace and extreme turn-around and drama. Masaaki Yuasa’s style is perfect for the anime adaptation – okay, maybe the character designs he favours are a little less nice to look at than the manga’s but that’s a minor point. He’s perfect because he is willing to be unconventional and throw wild techniques at the screen and he is willing to blend the fantastical with the ordinary through his unique direction. Characters turn into robots, monsters heroes at the ping pong table and it never seems forced or odd. It makes beautiful sense and brings life to the anime.

Yuasa’s style is all dynamic action that sees the animation made exciting through his directing. It’s clear that the show has a low-budget since the animation lacks the beauty and fluidity of bigger titles but one forgets that in moments when the camera angles and the screen can be split between a dozen different perspectives in rapid succession or the way match-cuts can link intense sporting scenes together with human drama.

He can make a second between a serve and a crushing return that will decide the fate of a game stretch to three minutes of existential conversation when a character finds the strength to transcend their circumstances through some epiphany brought to them by playing the game.

The direction gets across the insane reflexes and reactions of the players and the stakes that they pin on their matches. As much as it’s about playing a game and the skill involved, it’s about people, how they come to understand their connections with each other and those around them. How they embrace their dreams and ultimately find fulfilment. Not just the competitors but the spectators as well. That’s why there are so many cuts to reaction shots from all and sundry, so many internal monologues, and so many matches which can be cut short by a scene change to the aftermath.

There are moments like a ping-pong ball zooming across a table that are match cut with another flying object like an aeroplane. None of these techniques break the action but heighten it as people respond to an awesome ping-pong game or discover some important personal truth.

I saw so much that I found to be true that watching Ping Pong has been a lot of fun and made so many connections with me. Visually fun, musically it’s on point, too as the soundtrack, from the brilliant opening theme all the way to the end theme, is synched to heighten emotions.

This is what Noitamina is meant to promote. The sort of works that may not be commercial hits but provide the sort of intellectual and soulful content that anime can achieve if only it left moe an ecchi shows behind. This is something that speaks to higher artistic ideals and humanity. Ping Pong is ultimately about life, all of the experiences we accrue, the wins, the failures, and the joy and fantasies, the friendships and the rivalries and the memories. The anime shows how these things matter to people. It’s the way that we prove that we’re alive.