The 13th Asian Film Festival of Dallas will be launched in just over a month’s time and I have been contacted with some of the line-up. Looking at last year’s festival one can see a rich mix of titles from East Asia with anime making a huge impact. I like the look of the Japanese selection which included Berserk: Golden Age Arc I, Rurouni Kenshin, and Key of Life. The films I have been told about point to a diverse bunch which means that there should be something for everyone.

This year’s festival takes place from July 10th to July 17th at the Angelika Theatre which will be the place that Asian film fans can watch 40 feature films and shorts. There is a mixture of titles from Japan and Korea, some of which have been featured on this blog. Here are the films that were revealed so far: 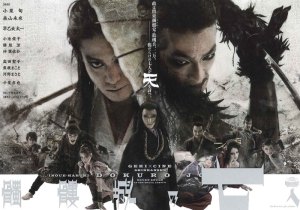 If you want to do a historical epic, why not try doing it by maing a stageplay? This is the big-screen showing of the Gekidan Shinkansen theatre troupe’s production and it stars big names like Shun Oguri, Eiko Koike and Mirai Moriyama.

It is the Sengoku Period and Oda Nobunaga is old news as Toyotomi Hideyoshi tries to unify Japan. Hideyoshi (Moriyama) finds his path to glory taking a sticky turn when he runs into a group of samurai holed up in a fortress known as Skull Castle which stands near a village known as Salvation which has overthrown its feudal lord. Cue epic siege and a cast of characters including a wandering samurai (Oguri), a prostitute (Eiko) and a girl (Naka) who knows the secrets of the seven samurai.