There are so many films released this weekend that I have had to split the trailer post into two (which I was doing a few months ago). I have had everything scheduled because I am down in London for the Terracotta Far East Film Festival where I’ll be watching three or four Japanese films, all of them released in Japanese cinemas this year – talk about fresh out of the oven.

As far as this/last week’s blogging goes, I ended up posting reviews for Blue Ruin and Real, the Japanese line-up for the Edinburgh Film Festival and I posted trailers yesterday. So there. That’s your lot. You can breathe a sigh of relief over the fact that you don’t have to read any more badly spelled posts from me… Until Wednesday. 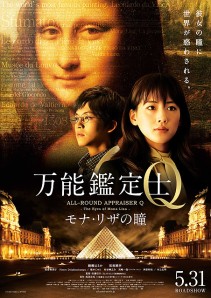 Based on a popular mystery novel by Keisuke Matsuoka, the story follows Riko Rinda (Ayase) who is an appraiser with sound judgement and an excellent memory. She’s in Paris because she has been hired by The Louvre to help facilitate a Mona Lisa exhibition in Japan. Yuto Ogasawara (Matsuzaka) is a magazine writer who follows her as she tries to solve a mystery. It looks very much like the BBC’s modern adaptation of Sherlock Holmes what with the on-screen text and character who possesses super observational skills.