This is the second part of the trailer post.

I have started getting rid of even MORE magazines now with old issues of the East Asian focussed “Neo” being stacked ready for recycling. I’ve gutted my “Edge” video game magazine in the hopes of saving lots and lots of issues of “Sight & Sound”. I might have to get rid of those to free up space… I have also started revising for a Japanese exams so my evening are spent not watching films or writing about them and so I am only putting out one post at the beginning of the week. This week was my Spring 2014 Anime picks. Despite this, I have watched “Watashi no Kirai Tantei” and “Jojo” as well as finishing up winter anime titles like “Reitetsu Hoozuki,” “Sekai Seifuku” and “Space Dandy” which all ended on a high. Expect a winter season round-up and posts for some other titles. Also, THAT LAST EPISODE OF “THE WALKING DEAD” WAS AWESOME!

Ahem… Here are the rest of the trailers for this weekend.

Mai’s boyfriend is returning from a business trip and so she heads to his apartment to greet him. She doesn’t find him. She finds 7 different people who claim the apartment is theirs. Will they be willing to claim an unidentified body in the bathroom?

The Next Generation Patlabor Chapter 1

Japanese: THE NEXT GENERATION ‐パトレイバー

Romaji: THE NEXT GENERATION ‐Patlaborー

This is the first in a seven-part series of films that act as a continuation of the Patlabor series with a brand new set of characters. Kenji Kawai is returning to the franchise to compose the music. Apparently, there’s going to be a lot of slapstick humour amidst the robot action.

I love the anime “Patlabor” but I am not sure what to make of this project. Mamoru Oshii has made lots of great anime like “Ghost in the Shell”, “Patlabor”, “Sky Crawlers” and more but his live-action work is… patchy (nobody mention that Steel Battalion advert!). While I accept that a director can re-work anything they were instrumental in creating (Ridey Scott with “Prometheus“), “Patlabor 1 and 2” are fond childhood memories of mine (Manga UK dub not the American one) and helped me become more cineliterate. I love each of the characters, especially Noa Izumi. I hope this is good.

Labors are robots used in various industries like construction. With their introduction to Japan, a new type of crime became prevalent: Labor Crime. To combat this, the Tokyo Metropolitan Police created a unit of Patrol Labors to help. The story is set in Tokyo in 2013, and we follow “third generation” of Patlabor. The Tokyo Metropolitan Police has disbanded Section 2 Division 1 of police robots, and Section 2 Division 2 barely has survived the budget cuts forced upon the police due to the long recession. What problems will the unit face now?

Sora Ando (Ikeoka) is a high school football player who is about to go onto the pitch for his final game before he quits to focus on studying. Just before he does, Shiki Wakamiya, a national women’s team player, appears and gives some advice. After the game, Sora hears about Wakamiya’s death and is inspired to keep on playing for her. His new found belief inspires others.

Mitsutoshi Tanaka is back with another film after last year’s drama “Ask this of Rikyu,” a title which was in contention at the recent Japan Academy Awards.  Kaho Minami “Angel Dust” and Tatsuya Fuji “Bright Future” star in a film where an ordinary salaryman naed Shunsuke (Ogata) finds his family life collapsing with his wife, son and daughter growing distant. Things get worse when his father (Fuji) develops dementia. Shunsuke decides to take them on a road trip in the hope that they are brought closer together. 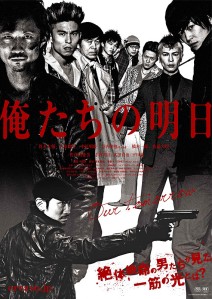 MAKIDAI of the group EXILE takes the lead as a professional burglar named Ryo. He is putting together a team of crooks to help him steal a legendary cache of gold. This will be his last job as a criminal but as usually happens with the crime genre, that one last job goes awry as friendships and betrayals emerge.