The name of director Yoshitaro Nomura has only been mentioned on this blog once and it was in relation to the anime “Coppelion” back in January. He’s a man I know from researching other titles. It’s a bit of an oversight because he is one of those directors who started work during the New Wave of Japanese filmmaking (think Nagisa Oshima) and carved out a mighty fine career tackling difficult subject matter and was awarded the Order of the Rising Sun by the Japanese government in 1995. I get the chance to rectify that oversight because the Institute of Contemporary Arts down in London is playing host to a season of his films during a 6-day run of his films from April 18th until April 23rd.

Yoshitaro Nomura was a popular director and pioneer of Japanese film noir. He made his debut in 1953 with “Pigeon” and directed, wrote and produced around 89 films up until his death in 2005, some of which are considered classics He worked a lot on adaptations of novels by the best-selling author Seicho Matsumoto and created what some critics consider the best version of “Zero Focus” (1961) which is one of the films getting screened at the ICA. The other films include the 1974 thriller, “Castle of Sand”, which is ranked as one of the greatest ever-Japanese films by domestic critics, as well as “The Demon” (1978), “Stakeout” (1958), and “The Shadow Within” (1970).

Here’s the breakdown of the films, just click on the titles for more information such as times and a more detailed synopsis:

“Stakeout” was Nomura’s break-out hit that established him as a director and the first of his eight collaborations with the already extremely popular writer Seichô Matsumoto. It is a stylish mystery about two Tokyo cops who travel to a small town on the southern island of Kyushu. They are there to observe the suspected hideout of Ishii, a lowlife murder suspect who they believe is being protected by his lover Sadako, who is eking out a sad life as the unloved wife of an arrogant businessman. As the cops observe their prey they come to sympathise with them. 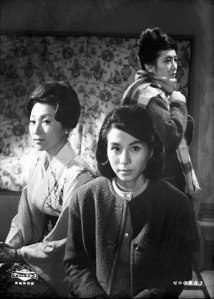 In my review of the 2009 remake of “Zero Focus” I made note of how popular this story has been and how many times it has been remade. For many critics, this is the superior version. The story follows Teiko, a woman who has only been married to her salesman husband Kenichi for a week before he leaves to tie up business in the snowy coastal city of Kanazawa and doesn’t return. He has seemingly disappeared off the face of the earth. This sets Teiko on a journey to find him but what she uncovers is a murder plot fuelled by secrets from the aftermath of World War II.

With this we get a drama about an emasculated husband named Yukio who is seemingly a success story of Japan’s burgeoning economic boom but is actually a stressed and lonely guy since his wife is trying to build her own company. He then meets Yasuko, a childhood friend from his small town, and the two start an affair. Yasuko is a widow, has a small son, and he becomes the focus of Yukio’s growing paranoia as he tries and fails to play the substitute father to him.

The Castle of Sand

“The Castle of Sand” is the film for which Nomura will forever be most associated and regarded as a great film. The story is a police procedural that takes place across Japan as a pair of detectives, one rookie, one senior, are investigating the Tokyo rail yard murder of Miki, a much-loved policeman who was a pillar of his community. Their single extremely slender clue has taken them to the north part of Japan’s main island, though they are soon forced to return to their baffled colleagues in frustration to search for more clues. As they search for clues they uncover a story of anger and discrimination.

This one looks absolutely tough. Tough in the way that “Nobody Knows” was tough… Maybe tougher going by the synopsis. It is based on a 1957 short story, which in turn is based on a real life incident involving children… It is an account of a pathetic father named Sôkichi who lives in a poor part of Tokyo. His printing business is in decline and his wife Oume is unhappy. Enter his mistress Kikuyo with three children he refuses to pay for. She leaves the children with him…

I hope to check out some of these films while I’m down in London for the Veronese exhibition and other exhibitions.