Only one post this week and that was for Shady. It gets released at the end of the month and I hope it gets seen by a wide audience. I wanted the review to breathe a little and get some time in the sun before throwing another dozen things up as is my usual habit. Like I state in my review, it’s a mix of the high school dramas of Shunji Iwai and the dark psychological dramas of Roman Polanski. It builds upon a script full of excellent characterisation, twists you won’t see coming and two actresses who breathe life into their roles to create one of the most gripping films I have seen in ever. It now sits upon my best film of 2013 list. I thought the review was pretty good – a little on the long side

much like many of the things I have posted over the last three years but that’s because I liked the film a lot. I want the film to do well and get a good audience so I’ll try some more posts promoting the film and then get down to writing reviews for the films I saw at the 2014 Japan Foundation Touring Film Programme.

Just to Go Back in Time, and bring 2013 up again, I now know that I will knock off two titles from my list of films released last year that I wish I could have watched because a film festival will be screening them!!! How do I know? My other job as an anime journalist and what not… 😉

In film terms I watched The Grand Budapest Hotel and enjoyed it tremendously. Expect a review! I posted some trailers yesterday and I’ve also added extra titles to my film review archive as well. Now… on to the trailers! 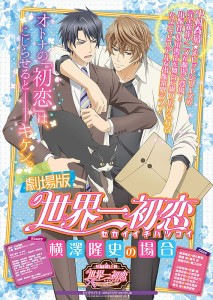 Hmm… how popular are shounen-ai titles in Japan? Well, massive, if the figure of 9 million for the number of light novels in the sekai-ichi hatsukoi series are to be believed. ANd why not? The latest film is directed by Chiaki Kon (Junjo Romantica) and is about two guys, Takafumi Yozawa and Masamune Takano, two guys at a publishing company who had a shared experience while at college…  According to Anime News Network:

Takafumi Yokozawa (voiced by Kenyuu Horiuchi) starts the trailer by saying, “My First Love that won’t come true. I knew that from the beginning.” The video’s text reads, “A man who was heartbroken by his best friend he always loved… A man who was an “inseparable work partner” and was harsh on himself and others.” Later on in the video, Yokozawa thinks to himself, “Why do I get so defensive when the conversation comes to him?”