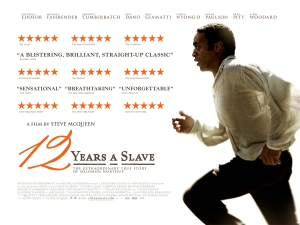 12 Years a Slave is based on the true story of Solomon Northup, one of many free blacks kidnapped and forced into slavery and one of the few to escape back to freedom. He soon turned his exploits into a book and stage play which abolitionists in the north of America used to help bolster their cause against slavery. Solomon’s story fell into obscurity after the American civil war but was discovered by Bianca Stigter, the wife of British Turner Prize winning artist of Steve McQueen who was seeking to make a film about slavery but struggling to find a narrative. McQueen is a man who has successfully made the leap from art to film with his first two features Hunger (2008) and Shame (2012) and now the critically acclaimed 12 Years a Slave which is an incredible adaptation of an incredible story. 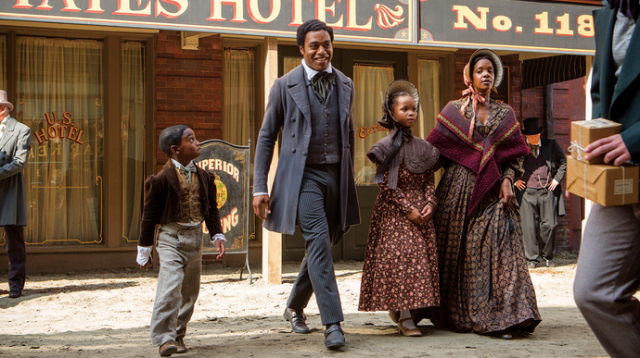 Saratoga Springs, New York, 1841. Solomon Northup (Ejiofor) is a free black man. He earns a living as a skilled carpenter and violinist and resides in a comfortable house with his wife and two children. In New York he is relatively safe from slavery which is the biggest and most commerically important industry in the world and is generally respected by his neighbours. Two musicians invite Solomon on a two-week tour as a musician but behind the smiles are ruthless kidnappers who drug Solomon and sell him into slavery. He is beaten repeatedly and given the name Platt before being resold to a plantation owner named Ford (Benedict Cumberbatch). Solomon earns the respect of Ford but the ire of the overseer Tibeats (Dano) who threatens his life. Ford decides to resell Solomon to a slave-breaker named Edwin Epps (Fassbender) to avoid any bloodshed but Solomon is far from safe from this vicious drunk who exercises his reign of terror on his slaves and Solomon’s years of captivity become even more brutal and dangerous.

To reveal the horror of slavery is a hard task that many films avoid or have failed to do adequately. Many are wrong like Birth of a Nation, romanticised like Gone with the Wind, or exploitative like Mandingo. Few in my experience come close to describing what I imagine the reality of the institution used to be, how big and brutal it was to put it bluntly. Through Solomon’s real-life first person narrative we get the reality of plantation life but in framing the story through that of an individual we sacrifice the scale of the thing. However with McQueen using his aesthetic principals he makes a stunning and raw film that does not shy away from the issues involved and gives audience every detail to place them in Solomon’s world and establish a slave narrative that feels the most honest thus far.

People familiar with McQueen’s art, more specifically his video installations, will know of his intense attention to detail and his interest on the effects of action and physicality on bodies and environments. One of his pieces, Deadpan (1997), is the recreation of the Buster Keaton stunt in which a house collapses around McQueen but he is left unscathed because he is standing in the spot of a missing window. The film is visceral stuff to see because he captures the collapse from various angles and distances and in very slow motion so audiences can see the resulting pressures on his body, the way he shakes and clothes ripple and dirt from the ground is thrown up and so forth. This rigorous attention to detail, this style and focus on bodies is in his feature films and creates heavy emotional blows that mount up for bravura knock-out endings that allow the audience to attain a sense of catharsis, especially here.

12 Years a Slave is a gruelling and harrowing watch. What makes this film an important and powerful adaptation of a vital historical document is McQueen’s rigorous and relentless and detailed approach and the skill of his regular cinematographer Sean Bobbit in capturing things. The long takes that give perspective and the constant focus on Solomon’s point of view means that the drama of the narrative is informed and complimented by the visuals captured and this makes Solomon’s story real and all the more impressive.

The film takes place in locations with strong connections to the plantation system and on highly detailed sets that conjure up powerful feelings of verisimilitude so that we feel that we have been transported back in time. We are not in cinemas but in the simmering humid bayous, in an atmosphere sticky with heat and thick with

moisture. We are under a burning sun in huge cotton fields that surround the beautiful plantations. It is reality. It is all scenic but McQueen is not interested in romanticising things. As much as we hear cicadas we also hear the clink of chains and the snap of whips. The sun mercilessly beats down on the dirt paths that the slaves faint under as they pick cotton before heading back to the shacks where they are crowded in together. In forests of oak trees, men hang from a noose and in the yards in front of the opulent plantations people are whipped raw. Amidst the beauty there is great cruelty and McQueen does not flinch from showing the severity of the beatings, whippings, lynchings and general mistreatments. By forcing the audience to watch, by using long takes and capturing the details, we understand how these things happened daily to millions.

A whipping becomes a highly traumatic thing to watch as we see flecks of flesh and the spray of blood from every stroke. We get to see the results which are gut churningly awful. No flogging in any movie past or present will ever be worth taking seriously again after this.

Next to the whipping is the lynching Solomon almost perishes from which best illustrates the point of McQueen’s style being effective. We see Solomon dangling from a rope in one long sequence composed of a long shot of his dangling body inter-cut with close-ups of his feet as he struggles to gain purchase and avoid dying. It is long and exhausting. These scenes are all the more horrific because life goes on around it as the work of adults and the play of children carries on in the background and off-screen. Sights like this are common for these people but their severity is shocking to a modern audience and so we understand the extent that violence was used.

McQueen does not let violence dull from overuse, he places it in a real context in which it is used to keep slaves in check and it hangs heavy over the film creating an atmosphere of foreboding so when violence is used it can be devastating for both the audience and characters.

I have focussed on the images and violence because it is used to imbue the film with a specific feeling and it is of sadness. It is a story of the inhumanity people can show to each other once they are trapped in an institution and mind set. Much like the abuse of prisoners in Hunger or the way some unspecified trauma has affected Brandon to such an extent that his body in Shame, the politics and finance behind slavery warp everyone and everything from religion to morality. Here we see how people treat others they regard as property and inferior and how they suffer for it morally and physically.

You can see the actors disappearing into roles. The costumes worn, the mannerisms and dialogue of the cast all further these feelings. Chiwetel Ejiofor as Solomon gives a remarkable performance. The camera focusses on him. He remains sympathetic as his physicality exudes a stoicism and pragmatism with hints of vulnerability. He radiates the strength man who goes through such traumas and does his best to survive while refusing to let go of his former life and hope. Michael Fassbender brings a fierce performance as Edwin Epps, a slave owner conflicted with his love for one of his property. Like Ejiofor, he sinks into his role and his emotions play out in his face on physicality which alternates between that of a patient father, a menacing bully and the extreme frenzy of a whirling dervish. He bursts with a vindictive and violent nature and both he and Ejiofor spark off each other well as the latter tries to placate the former. Even though we follow the first person narrative of Solomon and the men who own his life, the story has a range of women who provide some of the longest lasting memories. Perhaps the most scary character is portrayed by Sarah Paulson as Mistress Epps. While Edwin’s rage is easy to identify, if hard to control, hers is powered by an ice cold vindictiveness that radiates from the screen.  It is aimed at Patsey, played sympathetically by newcomer Lupita Nyong’o, who is the object of Edwin’s obsessions and the target of a lot of the horror. The look exchanged between Solomon and Patsey in their final encounter is heart breaking and a reminder that while he may have escaped many more slaves did not and there were so many like Patsey who suffered awfully. 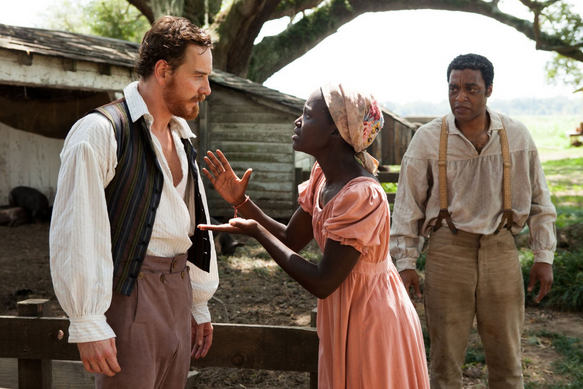 I was hesitant about watching this because of my emotional reaction to Shame which was pretty powerful. How would I react to a slave narrative already earning notoriety for its toughness? At the end of the film, after drying my tears, I was glad that I did make the effort to watch the film and I regard it as one of the best films I have seen in recent years. Despite having been brought up with knowledge of slavery it made me understand what it may have been like and it made me consider my actions, thoughts and feelings on a lot of issues. It is a film that informs the audience of a history many try to ignore, it makes one sad over the inhumanity that people can show each other and marvel over a person’s power to survive. It is a beautiful and painful spectacle of endurance and an important historical film and a powerful drama and I would not be surprised if it remained the best film I have seen in 2014.

Congratulations go out to the makers of the film for their success at last night’s BAFTA awards where it won Best Film and Best Actor.