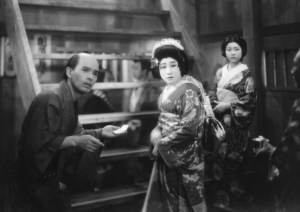 The first trailer post of the week features all sorts of different films but the most impressive is The Tale of Iya. Watch the trailer and tell me you aren’t impressed by it. I’m so impressed that I’m tempted to attend a UK screening. It’s a temptation that is hard to resist much like women, meat, and uniforms (that’s a Wooser reference, by the way, and Wooser continues being funny). It looks better than The Mole Song, Takashi Miike’s latest title, the big-budget release of the week. The rest of the trailers include documentaries and awful J-hora. There are more films tomorrow.

When I first read the synopsis I thought of the Hong Kong film Infernal Affairs but this is based on a manga by Noboru Takahashi. The trailer is crazy but that’s par for the course with Takashi Miike (For Love’s Sake). The film has a great cast of characters like Shinichi Tsutsumi (Why Don’t You Play in Hell? – review coming next week), Ren Osugi (Exte) and Mitsuru Fukikoshi (Cold Fish). The film was at this year’s Rotterdam Film Festival!

Reiji Kikukawa (Ikuta) has a strong sense of justice but graduates at the bottom of his class from the police academy. He is so useless his superiors send him on what should be a suicide mission. First the police chief fires him for disciplinary issues and then sets him up as a mole in the Sukiyaki gang, the largest crime group in the Kanto area. His target is Shuho Todoroki, the boss, and so Reiji goes through hell to get his man!