The 2014 Berlin Film Festival is underway and there are lots and lots of films. Enough from me, here’s the line-up. 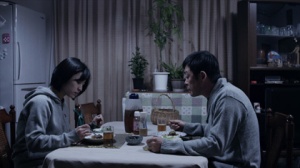 worked as an actress and in the camera and electrical department of a number of films like Vital and other Shinya Tsukamoto films where she learned directing and cinematography skills. Shot in a muted palette of greys, blacks and beiges in perfect tandem with the colourless lives of its protagonists, Ayumi Sakamoto’s striking debut has a keen grasp of friendship’s grey areas and linguistic cadences. A slow-burning thriller whose long, rigorously composed shots demand closer scrutiny: never disregard the unspoken and the unseen.

One day, Ayako Kaneshiro is reunited with her former classmate Yukari Hosaka. She invites her to join her company, and she accepts. However, Ayako begins to treat Yukari coldly and act strangely around her. Yukari feels increasingly pressured, but Ayako has her reasons. The pent-up hatred within her deepens the darkness in her heart. To confirm her own feelings, Ayako confronts Yukari. Their conflicting emotions intertwine… What lies at the end of this cycle of hatred? 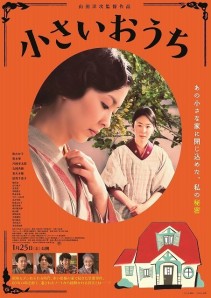 Yoji Yamada regularly features at Berlin and so the lucky audience get to see his first romantic film in his long career. It stars Takako Matsu (Dreams for Sale), Haru Kuroki (The Great Passage) and Satoshi Tsumabuki (For Love’s Sake).

Takeshi (Tsumabuki) finds several notebooks left by his recently deceased spinster aunt Taki Nunomiya (Baisho) which tells of her life before and during World War II.

As a young woman, Taki (Kuroki) worked as a housemaid in a little house with a red triangular roof in Tokyo. She served a family which consisted of a husband Masaki Hirai (Kataoka) who works at a toy factory his wife Tokiko (Matsu) and their son Kyoichi. Taki longs for her employer Tokiko but both women find themselves intrigued by a young artist Hirai brings home. However, the war takes a turn for the worse and so do the relationships in the house.

A Tale of Samurai Cooking – A True Love Story

This is historical film set during the Edo period and starring popular talent Aya Ueto and great actor Kengo Kore (The Story of Yonosuke).

She takes the lead role as Oharu (Ueto) who is an excellent cook and because of her skills she gets to marry into the Funaki family through Yasunobu (Kora). The Funaki family are the cooks of the Kaga Domain and they utilise Oharu’s cookery talents to teach Yasunobu how to better his skills.

Part of the Generation KPlus (Generation is a section devoted to movies from young people) Ugh. Kids in peril and kids being sad make me cry easily and this one has all the hallmarks of being a sad one…

The story revolves around two siblings, a young boy named Sotha and his older sister Haruna, who lost their parents after a major earthquake. Despite finding a safe home with their aunt and uncle the two children find it hard to fit in with their new lives  not least because Sotha doesn’t know that their parents are dead and Haruna wants to tell him. 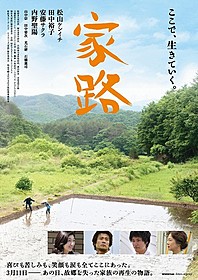 I need to revamp and update the 3/11 film list because nearly four years on from the event and Japanese filmmakers are still making films concerning the disaster. This drama stars some impressive names like Kenichi Matsuyama (Norwegian Wood) and Sakura Ando (Love Exposure).

Jiro (Matsuyama) returns to his former farming village which has been evacuated due to the fact that it lies near Fukushima Daichi and is badly contaminated. Jiro begins cultivating the land and teams up with an old school friend to plant rice despite the spreading radioactivity and its effects on their health. Meanwhile, Jiro’s half-brother has left the town with his wife and child and their mother. When their mother hears that Jiro has returned to their land she wants to go home and see him again.

A late edition and not a Japanese film but it stars a favourite Japanese actress of mine, Rinko Kikuchi. It’s about a lonely woman named Kumiko (Kikuchi) who lives a dul life as an office drone. One day, when walking along a beach, she sees a videotape on the shore and takes it home and watches a strange film about a man burying treasure in Minnesota. She convinces herself that there is treasure to be found and goes on a modern day treasure hunt in the deezing North Dakota wilderness. This set-up reminds me of a heart-breaking short film I recorded from UK television about a Japanese woman who watches Fargo and heads to the actual locations.

Continuing on from the last two years, the organisers have selected a lot of classic titles from golden age (from directors like Ozu, Mizoguchi, Naruse) and older (1930s and 20s!) because of all the films undergoing digital restoration in Japan. Last year of Keisuke Kinoshita was the focus while this year audiences can get to watch films from multiple directors.

There are some war and government sponsored films including Five Scouts, Tomotaka Tasaka’s 1938 tale of a group of scouts fighting through heavy opposition to deliver reconnaissance information to his company so his wounded comrades can evacuate back home. Apparently it depicts the war ‘realistically’ to show the dreariness and misery of operations. The War at Sea from Hawaii to Malaya was a 1942 propaganda film designed to encourage patriotism as it shows attacks on Pearl Harbour and British warships. The main character is a hot-blooded young man who flies from an aircraft carrier. As we follow his training we see documentary-style footage of training and possibly even actual news images. The 1926 film Light of Compassion by Henry Kotani is a social drama commissioned by the government and is about a boy named Junichi who lives in the slums with his mother but finds a way out when he defends a rich girl named Shigeko from bullies and she and her family take a shine to him.

There are quite a few jidaigeki like Teinosuke Kinugasa’s 1928 film Crossways which takes place in the Yoshiwara district and follows a young man named Rikiya who falls for the beautiful Oume and the tragedy that follows when violence enters his life. Humanity and Paper Balloon is the 1937 film from Sadao Yamanako (and easily available in the UK) which takes place in a crowded slum in 18th century Tokyo where a samurai named Mori and a barber named Shinza battle each other for control of gambling and Shinza kidnaps Mori’s wife who was forced to marry him… Singing Lovebirds (1939) is a musical about a cast of characters who fight for the affections of a young woman named Oharu who only has eyes for a ronin named Reisaburo. An Actor’s Revenge (1935/6) by Teinosuke Kunigasa is just as the title describes. Set in 1863 the story follows a man named Yukinojo takes revenge on three local officials who drove his parents to suicide. Yukinojo, in the intervening years, has become a well-known ‘onnagata’ (a man playing female roles) in a kabuki troupe which travels to Edo (the old name of Tokyo) where he discovers his three archenemies in the audience and plots revenge. 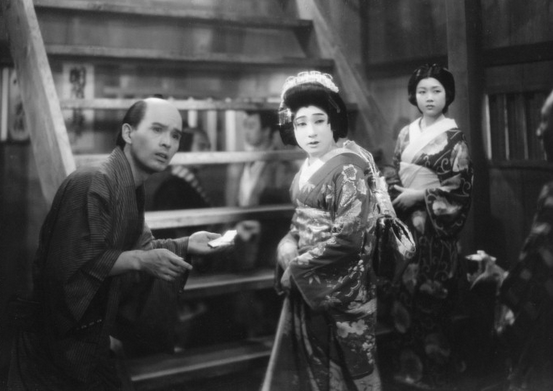 There is the silent film Tokyo Hero (1935 Dir. Hiroshi Shimizu) about the wife of a man who flees his creditors being forced to be a bar girl (scandalous at the time) and the impact it has on her children.

A Mikio Naruse film is screened in the shape of Tsuruhachi Tsurujiro (1938), a melodramatic story about the thwarted love between a shinnai singer and his partner who plays the shamisen.

Never mind Kurosawa, Naruse and all the rest. The big title amidst all of these classics is

Kenji Mizoguchi’s wonderful Ugetsu Monogatari from 1953 which is set in the Sengoku period and follows a potter named Genjuro and his brother-in-law who leave their loyal wives to become famous samurai only for tragedy to strike Genjuro when he comes under the spell of Lady Wakasa and the ghosts she is surrounded by.

There’s an Akira Kurosawa classic in the form of Rashomon, the 1950 classic and Oscar winning title that adapts Ryunosuke Akutagawa’s short story. A murder and rape have taken place in a bamboo grove and the bandit Tajomaru has confessed to crimes. However things aren’t as they seem as there are different accounts of the story…

The list of Ozu films include Late Autumn about the schemes of a group of men to marry off the daughter and widow of a recently deceased friend. That Night’s Wife is Ozu’s crime drama from 1930 where a guy desperate for money for his daughter’s medical bills robs a bank but the police are hot on his tail. Apparently, what makes this interesting apart from Ozu’s eye for great visuals, are the social changes taking place (Japan modernising, financial crisis) that are noted in the film and Ozu’s usual interest in family matters.

There are three features from the director Noboru Nakamura: Doshaburi (When it Rains, It Pours), released in 1957, is a melodrama about a family where the women love men who treat them badly as they refuse to commit to marriage and yet still hang around. The Shape of Night about a bored factory worker who falls for a vile Yakuza and moonlights as a bar hostess and worse… To end on a happier note there is a screening of Home Sweet Home (1951), where a common family, mother and father and four children, all live in a house. The parents struggle to pay their bills and support the artistic ambitions of their children like Tomoko, an aspiring painter, and it looks like they might lose their house when a stroke of good fortune comes to provide them happiness. 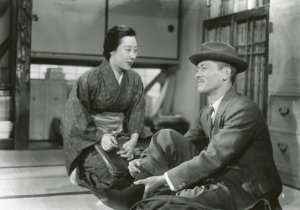 Japan is also well represented in the Berlinale Shorts Competition. Wonder, an 8 minute short from animation artist Mirai Mizue, which combined music from the orchestral group Pascals combined with a collection of images the director created and uploaded onto the internet over 365 consecutive days. The music and sound create sequences of colour and movement, tones and rhythmised oscillations to create abstract animation. Table Game is all about porcelain (which came to international prominence during the Rococo art era in Europe) and it’s history in Arita and the way it emerges when a Catalan restaurant develops a replica of the porcelain handicraft. Kamakura is a 5 minute short by Yoriko Mizushiri which is described thusly:

A snow-covered house is situated in the middle of a rice field.

What should one do, in a space of white and quietude?

By spring, the snowy hut melts and loses its appearance.

The Japanese MA, the inbetween state of time and space –

an animation, a haiku.

The Generation 14plus Short Film selection features Rhizome, which was directed by Masahiro Ohsuka and is described as an experimental study in black-and-white comprising a fast montage of hand-drawn images like brains with bar codes hovering in front of skyscrapers. Soliton, a 14 minute short film directed by Isamu Hirabayashi, where the camera is pointed down at the ground only thing we see is a guy’s camouflage trousers and boots as he traverses a variety of terrain like grass, sand, rubble, metal and concrete and human detritus. We hear gun fire and in the distance and the sounds of aerial attacks. As he journeys he encounters someone else…

The festival is already under-way but there are multiple chances to see all of these films over the course of this week!

8 thoughts on “Japanese Films at the Berlin Film Festival 2014”