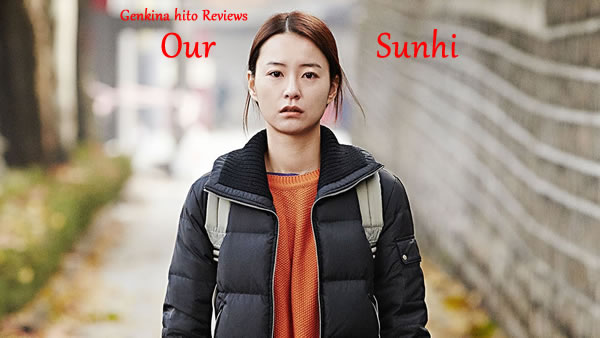 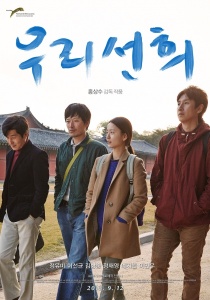 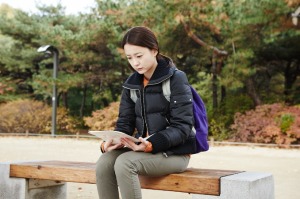 She is in her mid-twenties and is studying film. Apparently she went into hiding for one year. She just disappears off the map from time to time, seemingly on the verge of dropping out of her course…

But now she’s back because she needs a reference letter from her lecturer Professor Choi so she can study at a graduate school in the US. He agrees to write something truthful about her but she is unhappy with his description of her and asks for a rewrite. While she is waiting for it she encounters her mopey ex-boyfriend Kim Moonsoo who still harbours feelings for her. She also falls in with her introverted college senior Jaehak who has already made his debut as a filmmaker and is living apart from his wife. As the three men bump into each other and Sunhi, they all give each other advice about their lives and careers and the men cannot stop thinking about her.

And that is what Our Sunhi is about. One intelligent but seemingly uncertain girl and the three love-struck men around her who have one giant circular conversation full of advice repeated to the comic point of absurdity but never taken. The locations are few and often visited and they are the typical student hangouts like coffee shops and fast-food parlours (the film does end in palace grounds). There is the repetition of camera and character placement for scenes and the same innocuous love-ballad is heard as characters talk.

Far from being boring Hong Sang-soo’s carefully constructed film is amusing and quite intelligent, a cutting portrait of people and their hidden weaknesses. You might not see it at first because Hong Sang-soo’s writing and direction is ninja-like in its subtlety. No scene or line of dialogue stands out as important in a typical movie way and everything from performances to direction is synchronised to perfection so we do not see the technical underpinnings so when taken as a whole a meaning emerges as we witness people expose their inner fallibilities through their conversations and routines. Those who seem outwardly successful reveal themselves to be stuck. More specifically, the guys are stuck on Sunhi.

As one character says to Sunhi. “You’re the topic of my life. I can’t explain my feelings.” 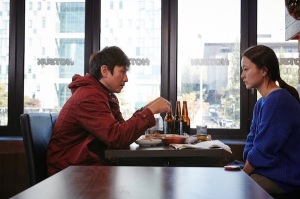 All of the men have seemingly achieved more than Sunhi. One is a professor, one is a student about to graduate and with a student film completed and one is a minor filmmaker who has made his debut. However much they have achieved they seem lesser than her. The more we get to know them, the more venal and uncertain they reveal themselves to be and we ultimately see that they are unable to actually move on with their lives with any conviction.

Professor Choi loves to pose as an intelligent elder but his actions are anything but mature and Moonsoo is insecure about his future and very needy. The reality is that they are immature men plagued by indecision while Sunhi has inadvertently charmed them at the moment when she is about to move on with her life. 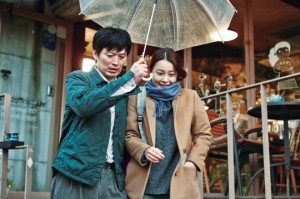 It is quite amusing hearing every line of dialogue being recycled and repeated in different variations to funny reactions but it becomes gently mocking when we realise that all of the advice that the characters pour out to each other might actually help them find a path to better themselves. However, as is ever the case with those good at giving advice, they do not listen to it and these men are distracting themselves by being fixated on Sunhi like she offers some sort of answer. Sometimes people live the way they please. There’s nothing much others can do. It is funny and embarrassing.

But I can see why Sunhi would be attractive. She is beautiful, intelligent, charmingly childish and earnest and has flashes of gutsiness. She at least has some idea about what she wants to do and she is going to pursue it unlike the men surrounding her. When the final reference is read out you understand a little bit more about her and what she means to each man, the fantasy they have cooked up.

Ultimately the film is amusing and embarrassingly familiar to anybody who has obsessed over someone else and neglected their own aspirations. it is much like the film Fine, Totally Fine, a film about people plagued by uncertainty. It is so well scripted and shot that it feels like reality. Think about it, how every character acts and what they say and the put it together and it all offers an amusing portrait of drift lives.