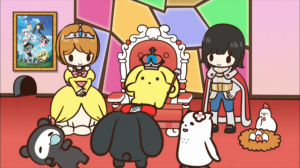 There are seven Japanese films released this weekend but I’m still splitting them up into two posts. This weekend’s lack of quantity sees an upsurge in quality as the dramas, action adventures and documentaries look better than the normal output. The first film today is a Japanese-Korean co-production which stars some great actors and looks a lot of fun. Fireworks Ideas is another title which looks beautiful and intriguing what with its existential crises, screaming and yelling people and dude waltzing around with a horse head.

This is a Japanese-Korean co-production and it has a great cast of actors like Hidetoshi Nishijima (License to Live) and the super-sexy Yoko Maki (The Ravine of Goodbye). It’s directed by Kim Sung-Su who was the chap who helmed The Flu. Even though I liked that film, when I talked to a Korean girl about it she burst into laughter and said it was awful.

Ishigami’s (Nishijima) life is ticking along like normal until he returns home to find his wife dead and two men who claim to be police are looking for him. Ishigami manages to escape tehm and goes on the run and soon hooks up with a Korean reporter named Kang Ji-Won (Kim Hyo-Jin) who offers to help him. Ishigami surprises the two of them when he starts speaking Korean and having vague memories of being Korean. What’s going on? Ishigami and Kang Ji-Won are on the case.

This is apparently Yoji (The Twilight Samurai) Yamada’s first romantic film in his long career and it stars Takako Matsu (Dreams for Sale), Haru Kuroki (The Great Passage) and Satoshi Tsumabuki (For Love’s Sake).

As a young woman, Taki (Kuroki) worked as a housemaid in a little house with a red triangular roof in Tokyo. She served a family which consiste of a husband Masaki Hirai (Kataoka) who works at a toy factory his wife Tokiko (Matsu) and their son Kyoichi. Taki longs for her employer Tokiko but both women find themselves intrigued by a young artist Hirai brings home. However, the war takes a turn for the worse and so do the relationships n the house.

I love the poster and the screen caps from this little indie film!

In this road movie we see the struggle to escape reality and achieve a dream that many people face. Our protagonist is Yusuke (Sakurai) and he is a part-time worker at a convenience store who has nightmares of a man with a horse head. He was once in a band but that was a long time ago and now his dreams have almost faded but as time passes he finds that the border between dream and reality becomes uncertain and so he goes on a journey guided by the guy with the horse head…

A documentary about traditional Japanese culture where the film follows Sojiro Kobori, a master of the Ensyu tea ceremony, over three years as he teaches people about the tea ceremony, the power of landscapes and art. 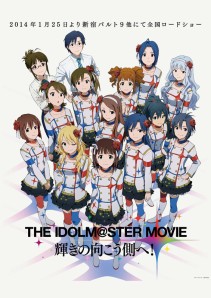 Come on everybody! Let’s be IDOLS! Minna-san, gambarimasu! The title translates as The IDOLM@STER Movie: To the Glittering Other Side! and it looks like it panders to the otaku demographic by showing the adorable girls working hard and looking cute. The film tells the story of how a character named producer is working his idols hard at a training camp for their upcoming arena concert. I’m betting this won’t involve the seedy swimsuit photoshoot section or the”make them dance even if they have a broken leg” part. Oh wait, that last one happened to a Korean idol group…