The central premise is one most anime fans have probably wondered about… What would a world ruled by a cute moe girl look like?

The world has been conquered. We see rubble strewn everywhere and there is no sound, only silence. The destruction and lack of life is a testament to some epic struggle in the past but in the distance…

In the distance of the opening shot a sparkling city of glass and bright lights punches up into the sky. This city is surrounded by the rubble of a conquered land. A middle-aged man walks through the rubble to a rusting statue of a girl holding a doll and salutes with the crisp motions of a soldier on a parade ground.

He stands before the statue of a little girl named Kate Hoshimiya. She did what nobody ever could before her. She conquered the world…

What a great hook! The world is wrecked and the terrorists win. What the hell is going to happen with this successful example of real world conquest? Can we consider these ruins success? What was so bad in the world before?

We find out as we get into the story proper.

The view remains the same but morphs into a time in the past where we see that the scene was once part of a recognisable city. It looks contemporaneous with our time. Cars roll down orderly streets and people are clocking off from a day at work. We meet the middle-aged man again but this time we meet him as a high school student named Jimon Asuta.

He has just run away from home and is about to spend a night on the streets. Cold and alone he meets a friendly face when he gets into a cheery encounter with a cute girl from high school. Their conversation comes off as something you might find in some harem rom-com until she mentions that he best get home before he gets arrested for breaking martial law. Martial law?

There are military vehicles patrolling the streets and people are quick to head home and lock their doors. We can only assume that it has something to do with a certain terrorist organisation or an authoritarian government.

This exceedingly cute girl claims to be the head of an organisation dedicated to conquering the world. That organisation is called Zevzda! We’re first introduced to her riding on a bike and harassing Asuta. She is too cute and young to take seriously but there’s something off about her actions, her dedication and intelligence… but we still don’t quite take her seriously! Perhaps that is how she wins because her facial expressions are so damn priceless but beware! She’s not just a cute face!

She sees potential in Asuta to become an awesome minion so she makes the homeless Asuta an offer he cannot refuse:

Forget snacks for a moment because Asuta gets a taste of how powerful Kate is as he finds himself caught up in a fight between the terrorists and the government. At her command are a group of eccentric individuals who have signed up to her terrorist organisation as generals and these generals have super powers like slicing vehicles in half. 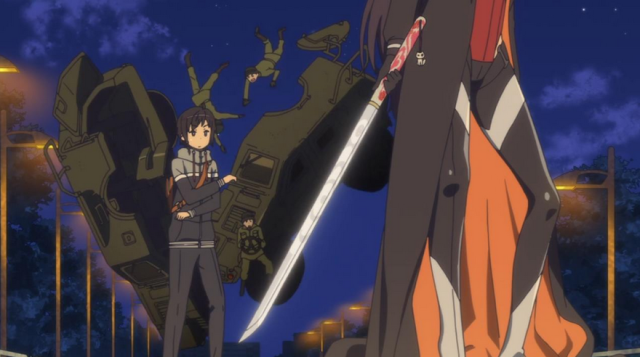 The government have tanks and helicopter gunships while the terrorists have a giant jellyfish made up of these multicoloured plushy things.

Yeah, this is going to be a silly anime and I love it.

When all seems lost and the government look like they are going to win Kate Hoshimiya shows up and blows everybody the f*ck up with her teddy bear.

The cherry on the cake is that whenever she wins a battle, no matter how big or small, the word “Conquered” literally gets imprinted on it.

Oh man, I had no idea I would respond so well to this anime. Two episodes in and, apart from Space Dandy, this one manages to connect the best with my comedy funny bone. The formula for this anime is the juxtaposition between the serious and the silly, the innocent looking and the seemingly villainous, the adult and the childish. Through excellent writing and cool characters the joke is sustained.

Our protagonist, Asuta, is a typical anime every-man – somewhat bland, his life gets upset by a surge in genki-girls, meganeko and general loons who drag him into all sorts of hilarity. He isn’t so bland as to be off-putting.

His blandness and ineptness are rather charming in the face of the weirdness and seeing him try and keep up with events is amusing.

Through him we will descend into the cutest madness committed to anime. The storytellers do an excellent job of leading the viewers into an intriguing world by withholding full details and parcelling out morsels. The beginning starts with the conclusion: the world gets conquered. Each episode is like a stepping-stone leading us along the path to understanding how this is done.

I say that Kate is leading a terrorist organisation but it’s never clear. We know from the start that some authoritarian government imposes martial law but why? We see the mix of magic and reality and weird monsters but how do these things coexist? How will Asuta cope with the chaos and madness? Especially the madness that takes the form of Kate and all of the cute chaos she will cause.

Characterisation is as sharp as a razor when it comes to Kate. The incongrouity of a moe girl speaking like Stalin or some other megalomaniac or “freedom fighter” is fantastically caught in the dialogue which goes from high-minded, persuasive ideologies to slipping into something more her age. These lines are constantly littered throughout the anime:

“Why do you drive this tank? To protect your family, your land, your honour? Tanks only exist to justify the military complex!”

Kate adapts famous political speeches for her own purposes:

“Conquest of conquest, by conquest, for conquest!”

“Lincoln had potential, his problem was that he couldn’t handle bullets.”

Apparently, it references Abraham Lincoln’s Gettysburg’s Address – “Government of the people, by the people, for the people” – which is neither here nor there really because Kate’s line about bullets had me in stitches. This next one is one of the best of the season:

Indeed, I laughed hard at these lines because the seiyuu get the tone just right. Misaki Kuno, a relatively new seiyuu, (she voiced Grande Rosso in Galilei Donna) delivers this with a slice of pure cuteness and I can imagine a re-education camp using her voice to brainwash people. She works well with the VA for Asuta, Natsuki Hanae, a rising seiyuu with starring roles in anime like Outbreak Company and Tari Tari who veers from panic to bemusement with every situation.

The money spent on this anime is clearly evident in the fluid and fun animation but what really got me was the pretty candy-coloured city and characters are fun to watch. 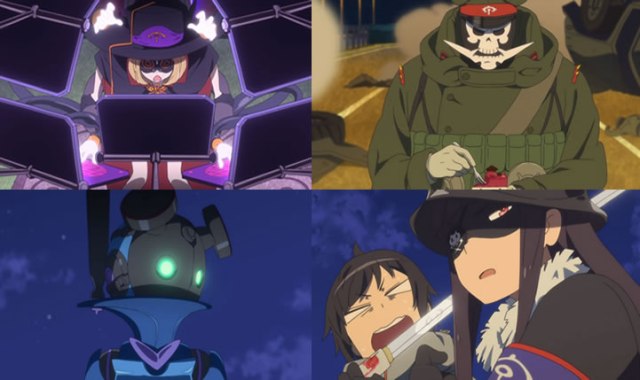 These are some of the fun characters of the season. Indeed, the characters are so cute they are all memorable and that is down to some excellent character designs from Kouhaku Kuroboshi who worked on Kino’s Journey, one of my all time favourite anime. Kuroboshi works the magic again with a set of characters I love to watch! Kate is absolutely adorable with a fantastic set of features that contort from authoritarian to… I’ll use the word again, cute. Punishment from her is wonderful.

But two of my other favourite is Itsuka Shikabane voiced by Mariya Ise who, last year, stole my attention as Sawa Nakamura in Aku no Hana.

Like Kate, she’s bigger than life but more sadistic and aggressive (and the one that sliced the armoured vehicle in half above!) and the writing serves her well.

The opening episode was the funniest one of the season and the second episode has managed to keep the laughs going. As the current series I’ve written about reach their third episodes, Nobunagun has stumbled, Nobunaga the Fool has improved slightly and Wooser keeps getting better but it’s this one and Space Dandy that I’m most engaged with. I love the OP and ED songs.