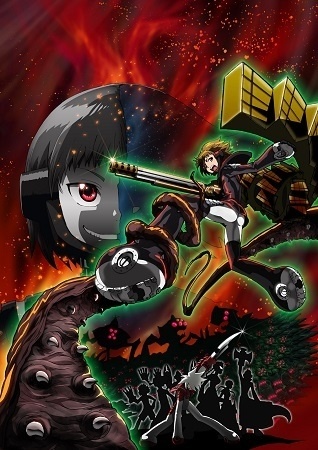 High school girl Shio Ogura is visiting Taiwan on a school trip when monsters attack. These creatures are called “Evolved Invaders” and the military is useless against them but then… the mysterious E-Gene Holder agents from the government organisation DOGOO appear! What is special about these guys is that they wield weapons infused with the spirits of great historical figures – Gandhi s a barrier and Newton is a gravitational manoeuvre. It just so happens that Shio Ogura has the e-gene and can wield a weapon! Shio’s E-Gene is infused with the spirit of Oda Nobunaga. He is now a giant machinegun. He is… Nobunagun. Genius. Let the battle commence!

This is so awesome. All the emotions and drama that anime can provide is nice and all. I mean, I do love the tragedy seen in Attack on Titan, the family aspects of Kyousogiga and the awkward lives of the cast of Aku no Hana but sometimes I just want to have fun and those shows are really entertaining when sh*t gets blown up. The opening two episodes of Nobunagun did this and were fun!

What makes this show is that it is both packed full of action and light-hearted. It has one simple goal, entertainment and nothing more. There is a story but it is an easily digestible one that follows a familiar formula and sets up some cool characters.

All I could think at certain points during this anime was how much fun things were. The visuals and animation are fast flowing, the editing fluid. Camera placement can range from the inspired to the bizarre but it’s never boring.

Everything starts at Nobunaga’s worst moment as he is about to die, his fortress is under attack and he is woken up and in a sequence where we get a first person perspective as he turns badass and battles back his enemies before an alien steals some of his genes. F*ck historical accuracy, lets just get the show in the road! The editing is fast and fluid, the camera angles switch rapidly and action is only a moment away.

Then we get drawn to our main protagonist Shio Ogura.

Shio isn’t a delinquent or a moe girl or a genki girl or some other over-used stereotype that may annoy or act as otaku-bait, she’s just a nice girl, a slight outcast and a bit socially inept and aware of it but essentially lovely.

Anyway, what distinguishes her is her unhealthy interest in weapons – she reads books about them in class, has model tanks and jets at home and daydreams about gones – which is part of the reason she’s frozen out of the cool girl gang. I guess modern teenage girls are starting to get an appetite for destruction in a major way which is cool. I feared she might be a ditzy airhead since when we first meet her she’s late for school and when she sleeps she drools but that was a false alarm. She’s cool.

God, it’s nice to meet a nice girl every so often. I liked the early scenes when she was in Taiwan with her class and disappears by herself to try some local culture instead of hanging around a girl gang trying to fit in. She took in the sights and tried speaking to a stall holder and bumbled through the conversation to earn an extra sweet bun. It humanises her a lot and I identified with her because I’ve done that myself. Anyway she’s not totally unpopular because the idol of the class tries to include her in the trip (they even did a selfie – I bloody hate that word) and it was sweet seeing Shio’s hesitant happiness.

Then we get to the alien invasion. Underwater space aliens emerge and engage the Taiwanese military in a battle that was well-animated, full of flashing lights and explosions and people dying. The switch was a bit like a Kaiju eiga with distant ominous signs soon elbowing their way into reality. Shio was having a nice trip luxuriating in a park and is suddenly thrown into scenes of all out carnage as people are blown apart and skewered on claws!

The switch is dramatic but it works. Throw this into a mix of exciting editing and camera placement and the show becomes an excitement engine. It is very like episode one of Evangelion where conventional military forces gather to attack the aliens (Shio nerding out over the military porn as she stands aghast at all the hardware gathering) and are comprehensively wiped out. It deviates from Evangelion in the fact that Shio isn’t a hyper-depressive who doesn’t believe in herself and runs at the first sign of trouble. No, Shio is brave and she tries to help her classmates and teacher and in doing so unlocks her hidden power. Yeah, we’ve heard that a million times before but this one’s fun.

Remember Nobunaga had some of his DNA stolen by an alien? Turns out that it’s in Shio. The hidden power she has is Nobunaga in the form of a machine gun!

And she turns into what looks to be a hyper-destructive gun-slinger.

Not only that but he appears in her mind to give her tactical advice during battle and encourage her widespread murder of alien beasties and laugh like a lunatic!

She’s not alone because there’s a sociopathic killer who holds the genes of Jack the Ripper who slices and dices his way through the aliens!

And that’s it. The story is that simple to grasp one of the main protagonist discovering hidden powers and blowing sh*t up with other crazy people. This is one of the reasons I watch anime. It appeals to me on a base level. I am reduced to a giddy schoolboy.

The second episode is all about the fallout from the alien invasion and the mix of feelings that Shio has at being given the powers and what she’s fighting for. There’s the revelation that a secret organisation has been watching these creatures and assembled a group of people with similar special powers and their number includes Ghandi and Isaac Newton and Shio will soon enter the training arc.

Two episodes down and Nobunagun has proven to be one of the most fun shows of the Winter 2014 season. Only Sekai Seifuku beats it in entertainment stakes. To top it off the show has awesome heavy metal OP and a sparkly electro ED.

As soon as I hear the opening theme I burst into maniacal laughter and thank the gods that some shows just don’t give a damn about being serious!